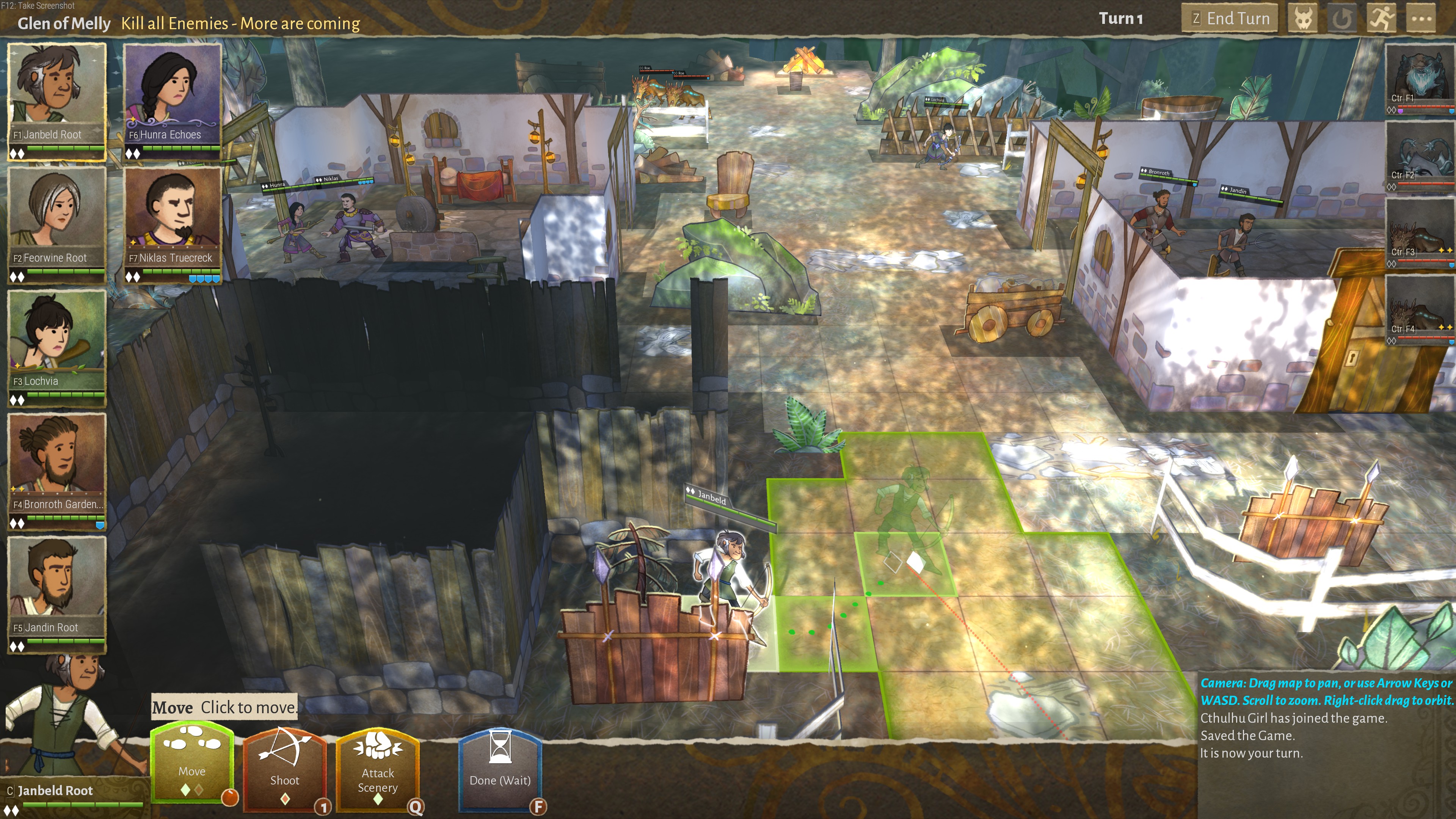 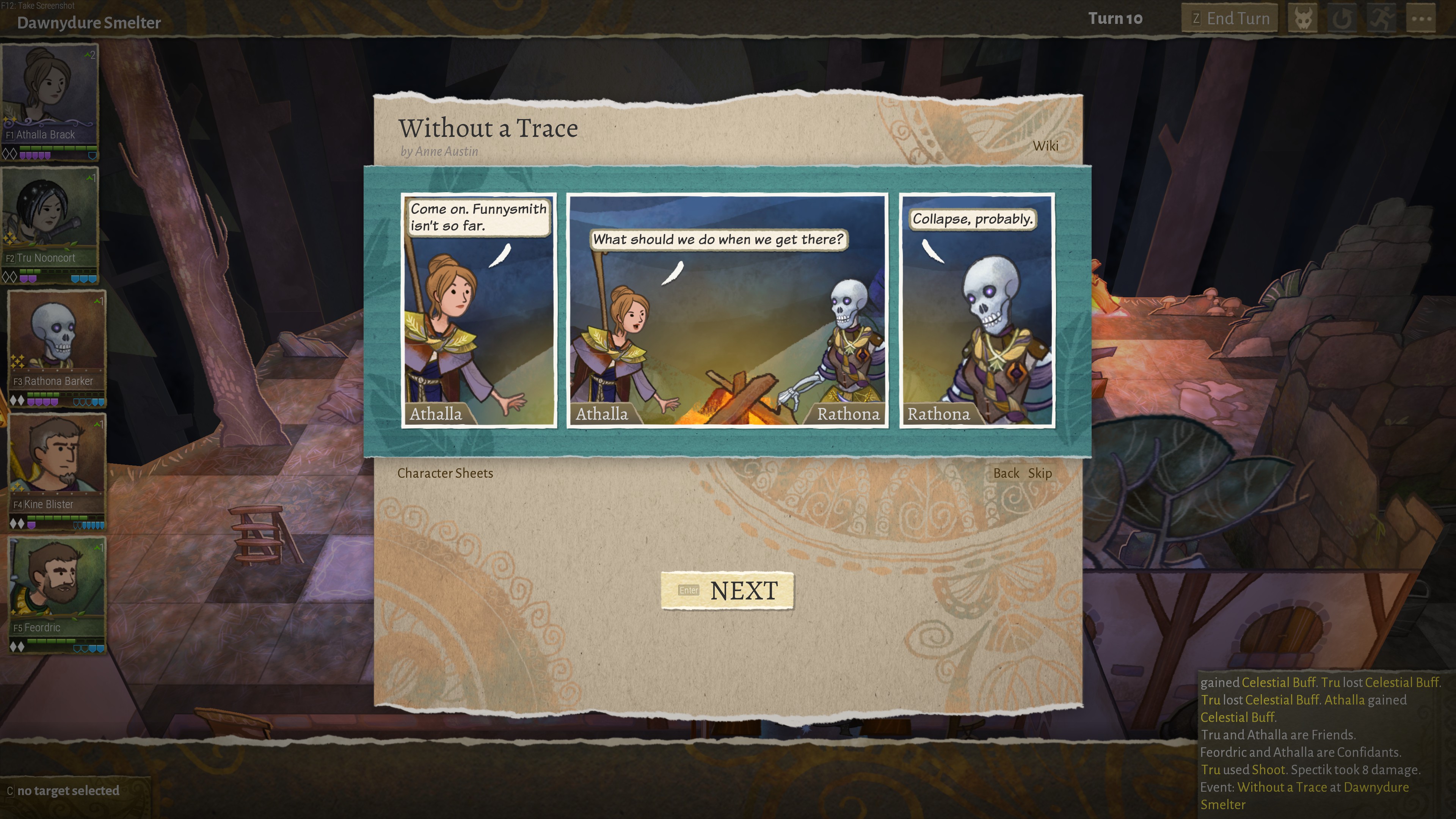 Wildermyth is a tactical role-playing game where players build common townsfolk into adventuring heroes. The game features five enemy factions, each of which has a premade campaign with them as the primary enemy. However, the bread and butter of Wildermyth is the randomly generated events. Even in the premade campaigns, these play a big role in shaping the player’s party. Random events or side quests can pop up to grant the party temporary effects for a battle, or longer-lasting changes such as artifact weapons or permanent physical transformations. 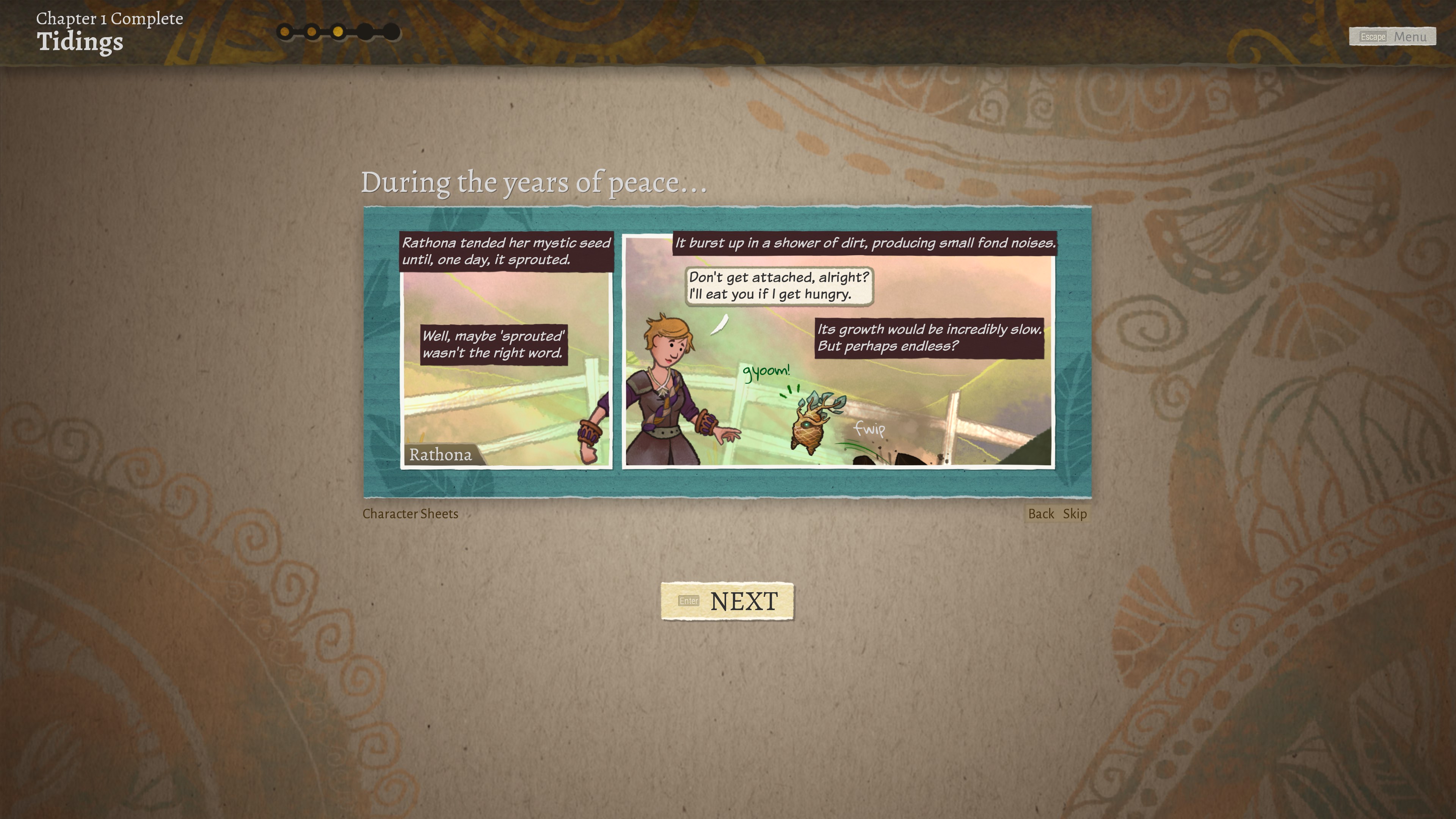 Obtaining a pet through a random event

All equipment, not just artifacts, is bound to a character once assigned and unbound equipment is scrapped. Outside of random events, most equipment upgrading is done either during peacetimes between chapters or by catching randomly spawning elemental spirits to infuse into existing weapons. When a hero dies or retires, they’ll take their class, equipment, transformations, and abilities and join the player’s legacy. Heroes from the legacy collection can be found on future campaigns at reduced levels and age or taken on legacy-specific campaigns. For players looking to build up a familiar roster of legacy heroes, this can make risks leading to permanent injury or transformation more impactful. 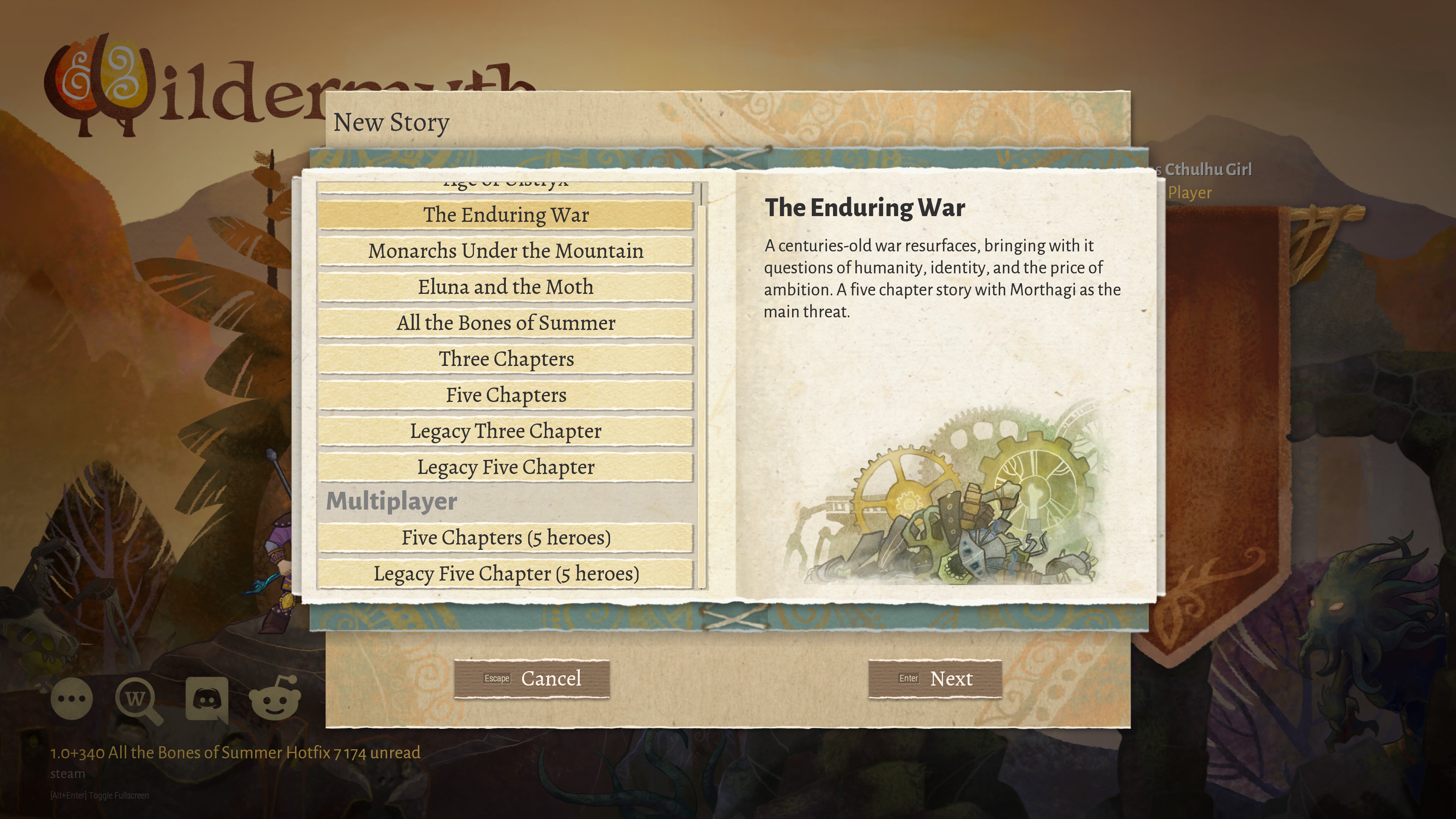 Unfortunately, I was somewhat unimpressed by the variety of random events. In the first chapter of my second campaign, about half of the random events I’d already seen. This took away the rare and special vibe many of the events present. Particularly as someone who loved getting permanent effects or transformations on my characters, I quickly felt my pool was limited to diversify them. I’m hoping to see more events and character development options, either from the developers or the modding community. All that said, I found a fair number of the existing random events amusing, and the level of sarcasm was on point for me. 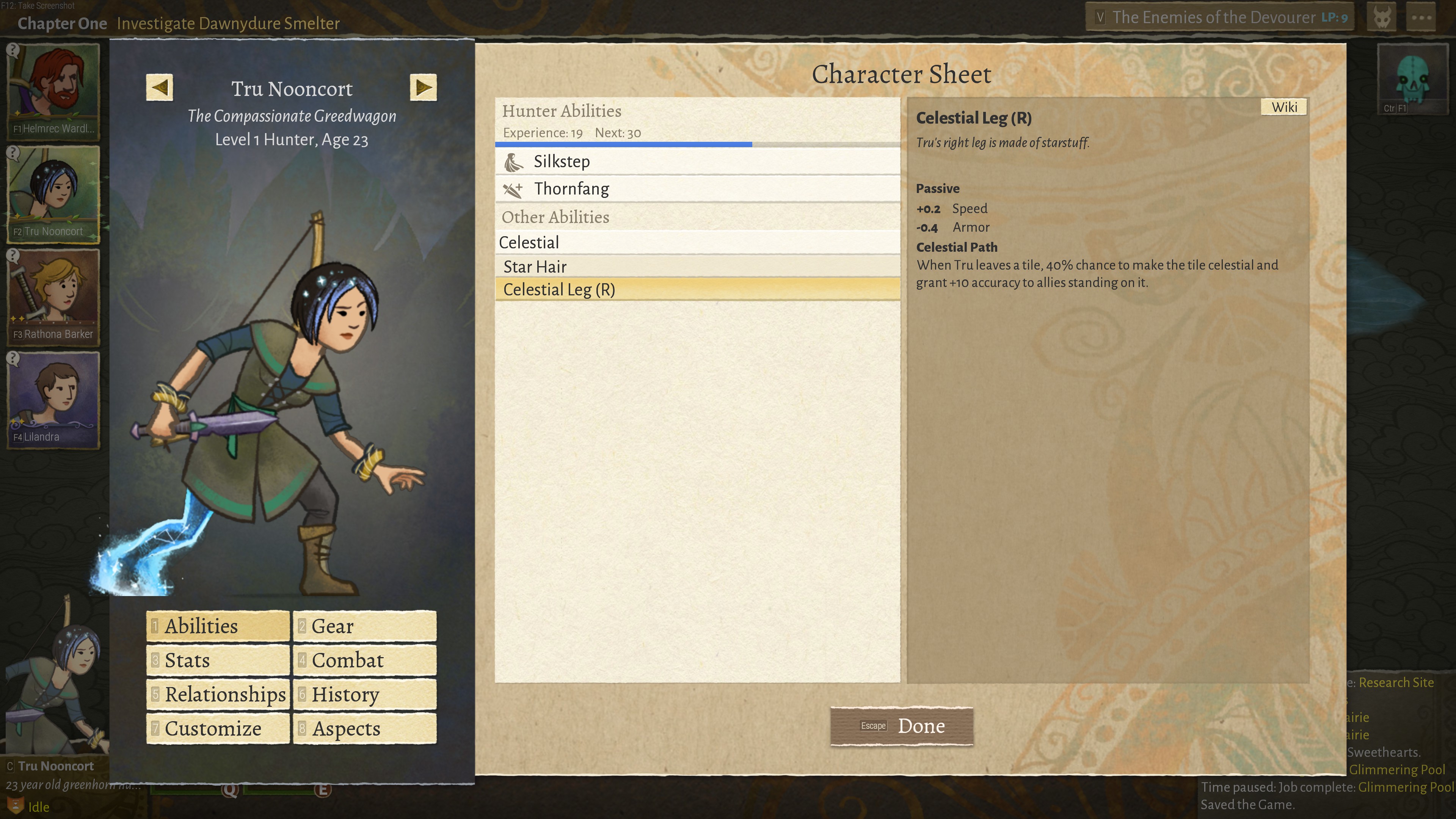 Most transformations can be progressed or halted by the player

The randomness of Wildermyth uses generated hooks and personalities for each of the characters. A character that’s greedy for example, is likely to get risky opportunities to loot something valuable. Based on personality and user choices, characters in a party may also become lovers or rivals. Combined with the default relationship of ‘friends’, characters can strengthen these relationships by interacting and fighting together, each providing a different bonus in battle. Personalities and relationships also determine how characters spend their peacetime and retirement. A successful campaign will show an epilog of what happened to the party members after they defeated the threat. 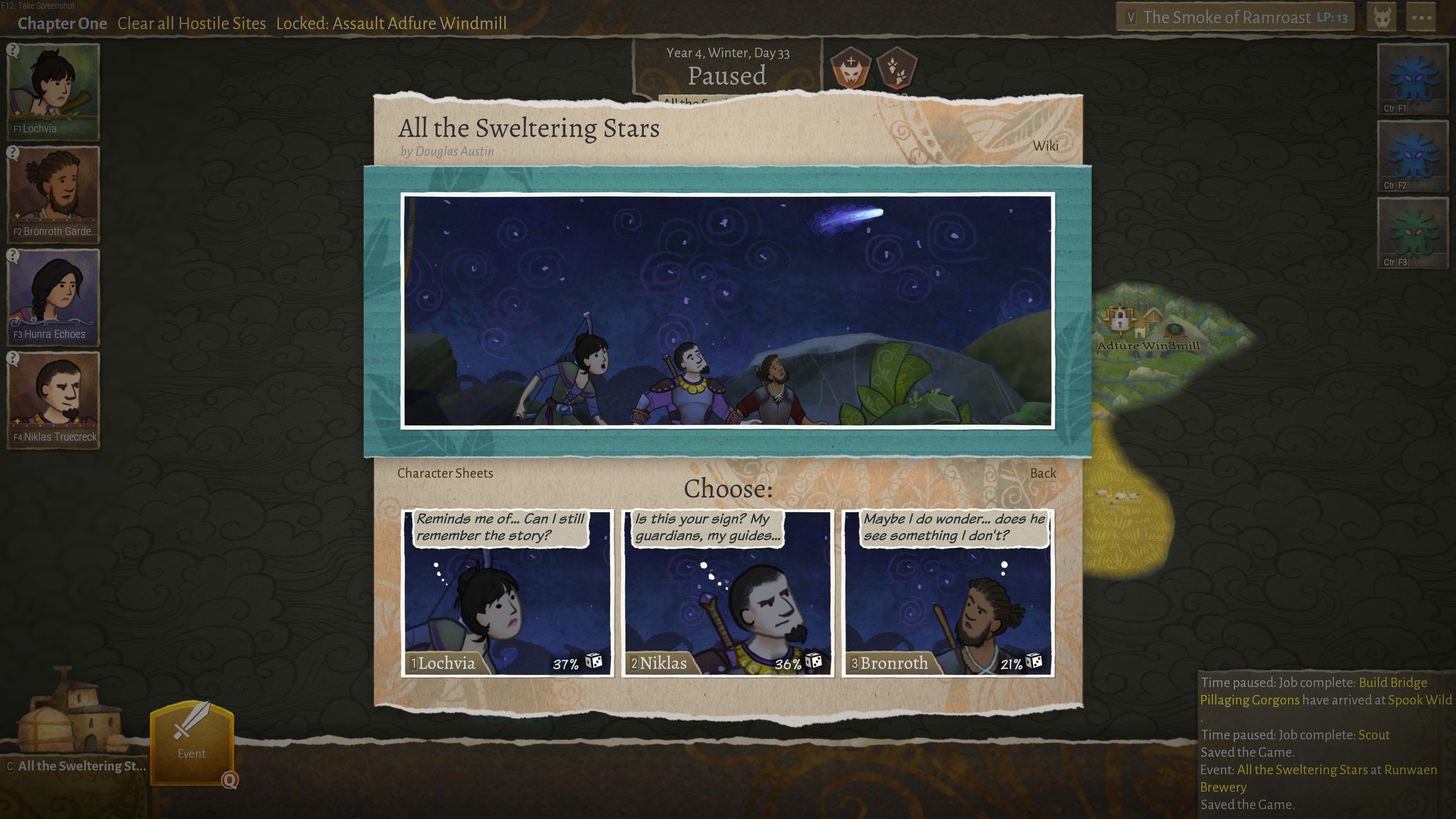 There are three classes in Wildermyth, which affect what armor and abilities characters can learn. Warriors are presented as melee fighters, Mystics as mages whose magic depends on the items in the environment, and Hunters as ranged and stealth units. Outside of combat, a character’s class doesn’t have a large impact. Though it can have minor effects, such as improved map travel and scouting time for Hunters. However, all classes can wield all weapons and accessories. So, a Warrior with a wand or a Hunter with a two-handed hammer are doable. Two of my favorite characters have been dagger wielders, one being an undead Warrior and the other a celestial stealth-based Hunter. All characters can take two sets of weapons into battle with them and freely switch between them. 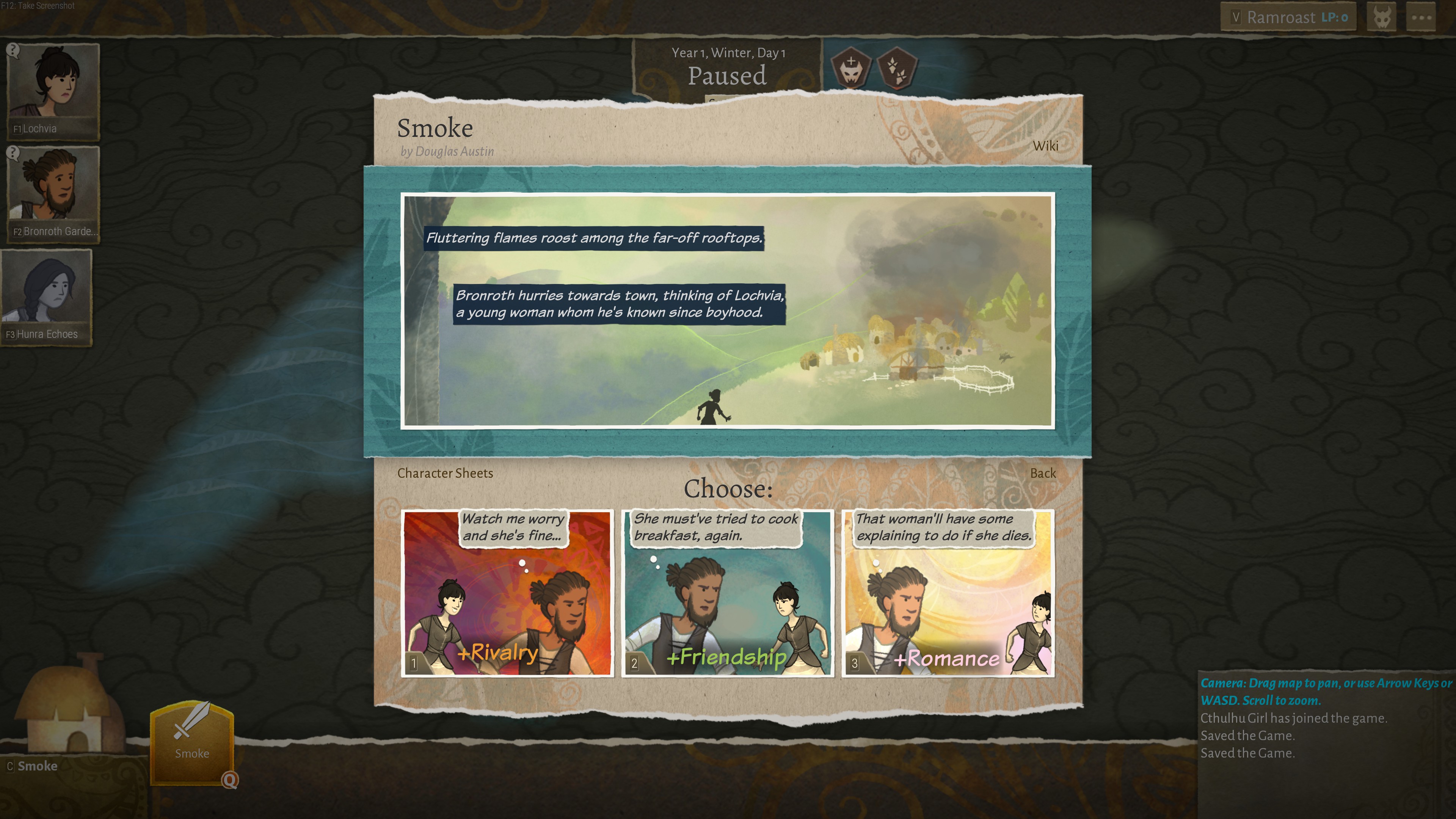 Between fights, players can move their characters around the overworld. Here players can scout new areas, recruit new characters, build buildings, or move to locations of interest. The party can be split to meet these objectives, but the fewer characters working together the slower tasks go and the more likely they’ll be ambushed if working in an infested area. An infestation means enemies are present in the area. Infestations will slowly spread to surrounding areas if not dealt with and over time with spawn incursions. Incursions are powerful enemy raids that will destroy buildings and towns in their path until they peter out or are defeated. The spread of infestations and spawning of incursions put pressure on the player to continue advancing the story and pushing back the enemy. At the end of each chapter, the intact buildings will contribute resources for the player to build better gear while having a higher infestation level reduces the peacetime between chapters and can make the next chapter more difficult. 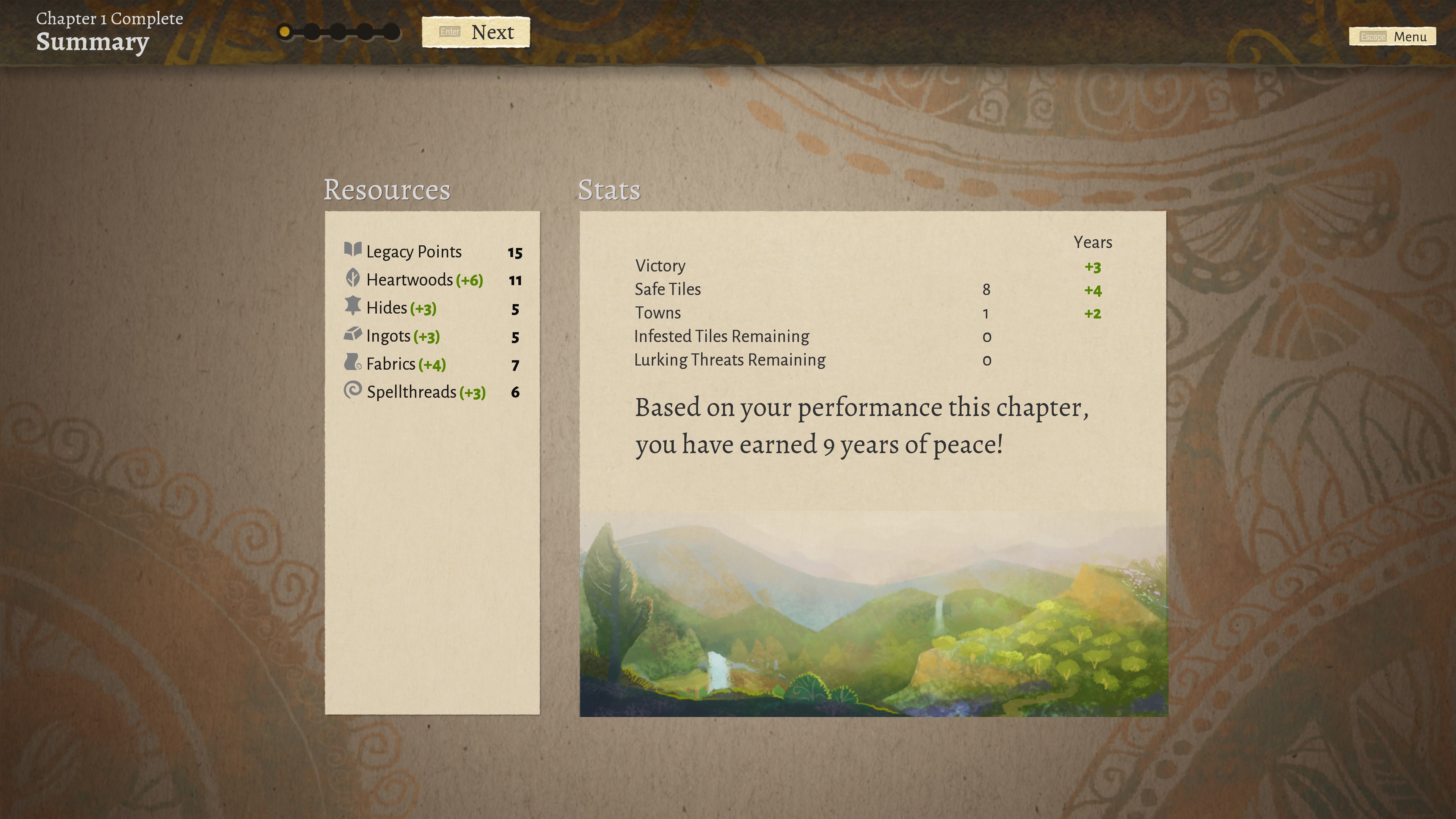 Overall, I enjoyed Wildermyth and the stories it generates. The 5 premade campaigns offer a ton of content and beyond that, it has a lot of replay value with the generated campaigns. I love the sarcastic humor and legacy options to bring the player’s favorite characters on new adventures. I was a bit disappointed by seeing a lot of the same random events multiple times though, and hope the pool can be expanded in the future. The silly hopping animation during combat also detracts from the serious life-or-death combat as well. I recommend Wildermyth for strategy RPG players looking for a game that focuses as much on developing the characters’ stories as the combat.