Darkwood is a survival horror game with RPG elements. The atmosphere is dark with mutated people and animals, poisonous and overgrown plants and fungi, and inhabitants in various stages of mental decay. Craft and upgrade weapons, barricade and set traps, meet and help unnatural characters, or shoot first and answer questions later. Just don’t let the Darkwood consume you. 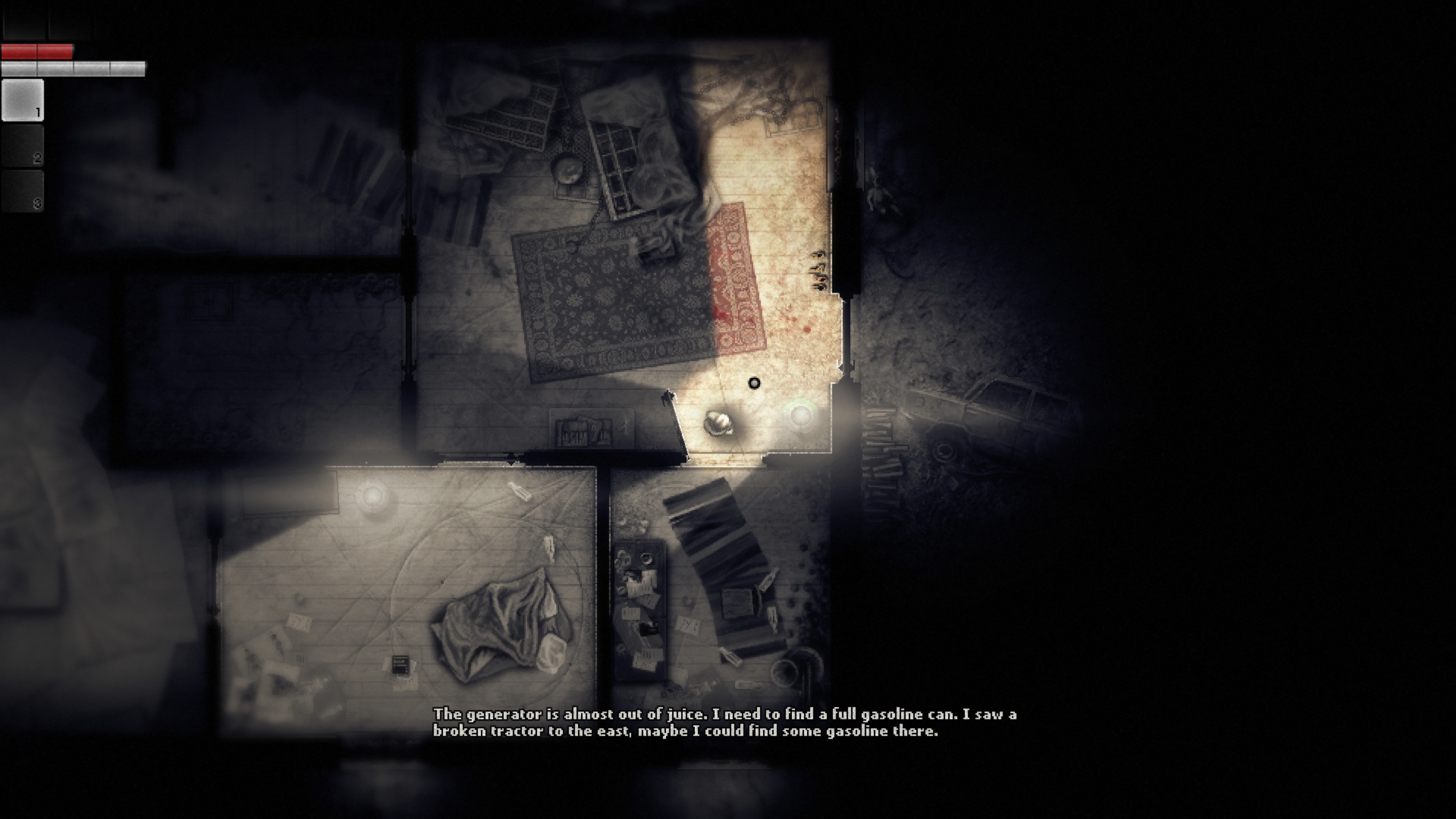 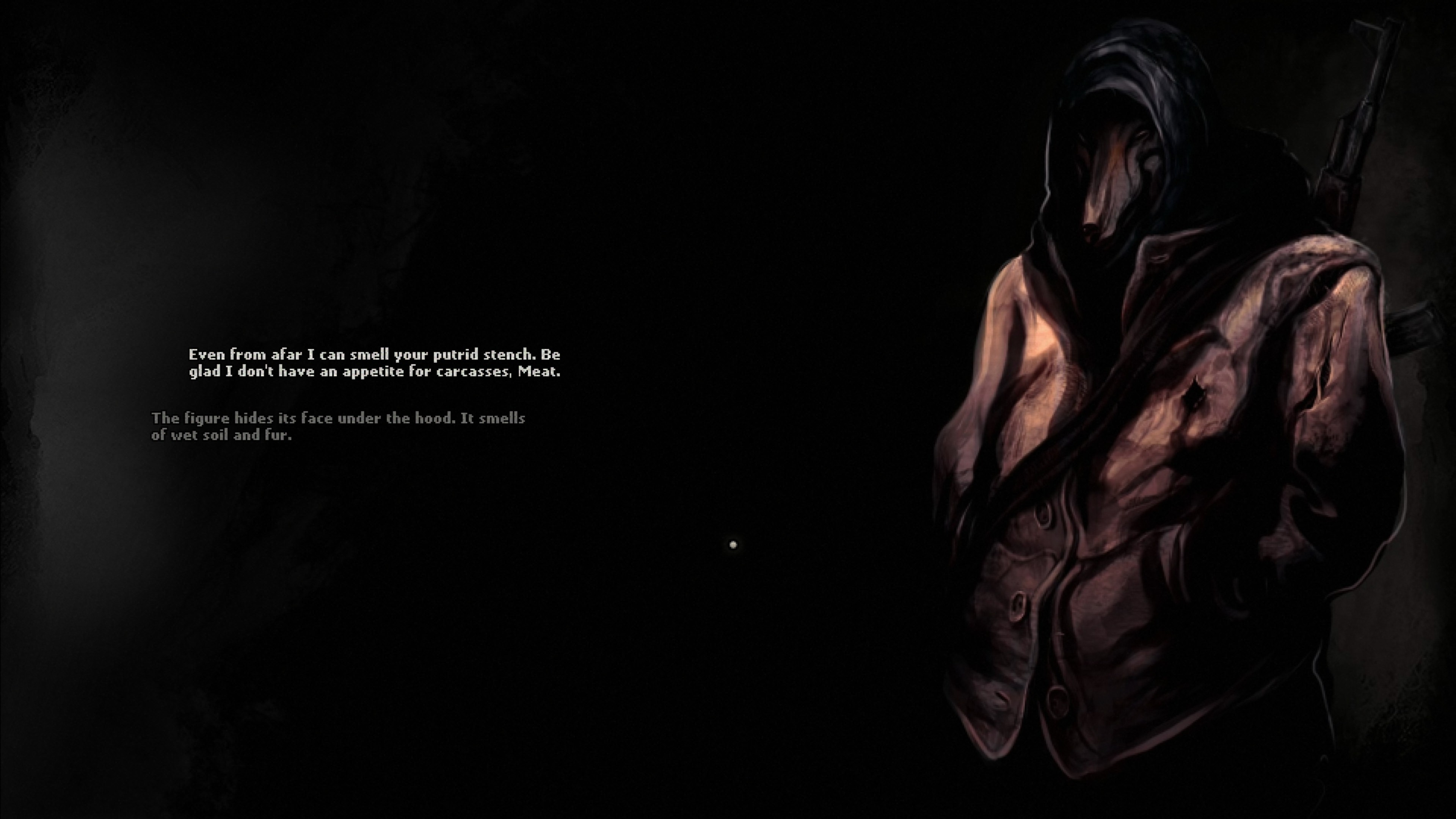 One of the friendlier types, to put it mildly

One of the most striking things about Darkwood is its’ atmosphere. Everything feels unnerving, sinister, and full of rot. If it moves, it’s probably trying to kill you. Just because something looks dead, doesn’t mean it is. Always keep a weapon on you, even in your house. Stay next to the light, and pray it doesn’t go out. Darkwood takes all the food / water / sleep managing out of survival and instead fills it with sharp teeth, pitchforks, and “What the F*** is that!?” 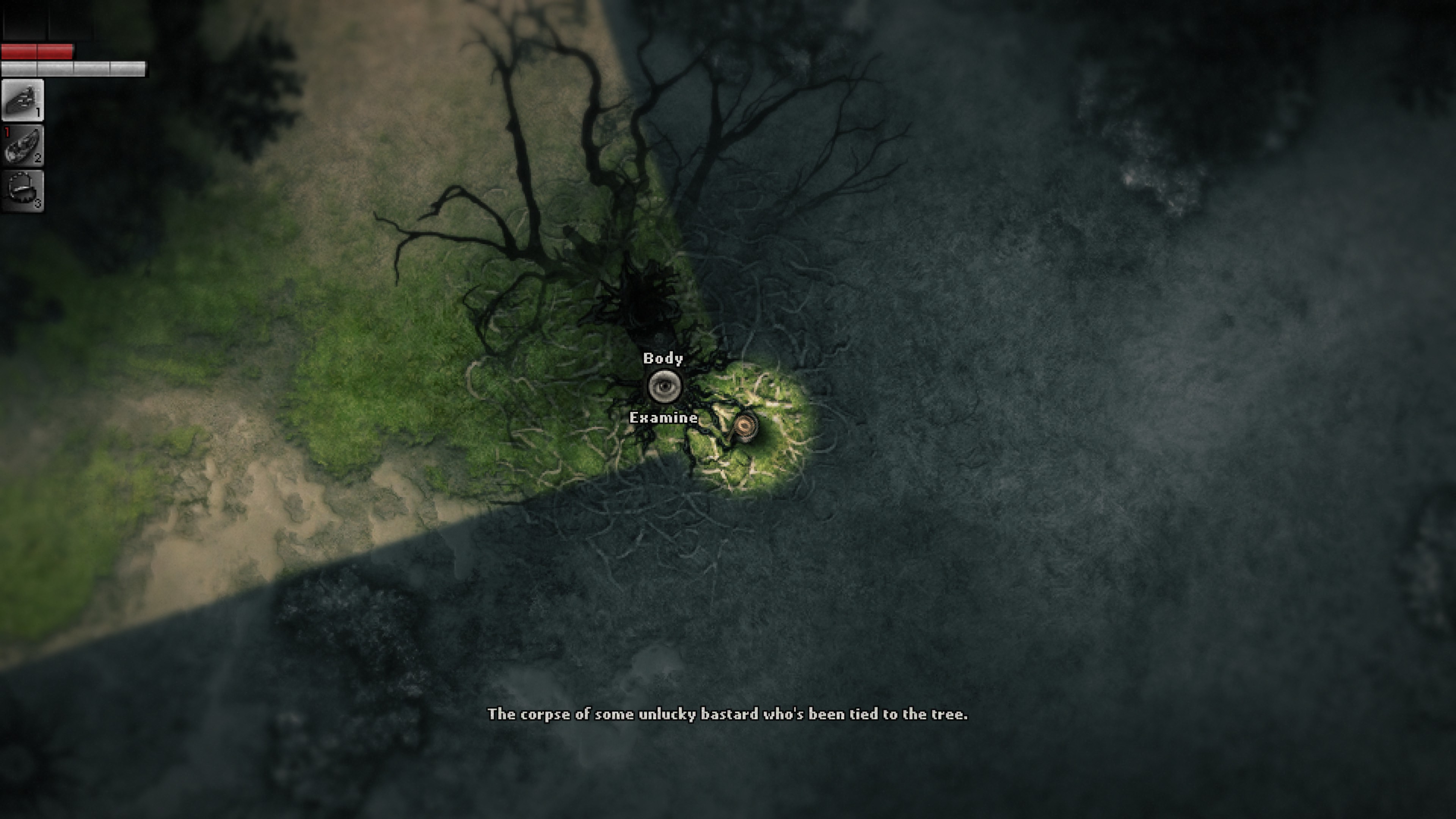 Darkwood has two convenience mechanics which I really loved. First was that once the player starts moving bases, there’s a story and setting appropriate option for all their belongings to be automatically moved to the new base. As a player who typically hordes everything they find, I really appreciated not having to move all my crap myself and to get on to the exciting part of exploring my new area. Second was that after surviving the night, time is paused until the player leaves their base. This gives them plenty of time to repair, craft, upgrade, and trade with the daily trader and then still have a full day to explore, loot, get eaten by dogs, etc. 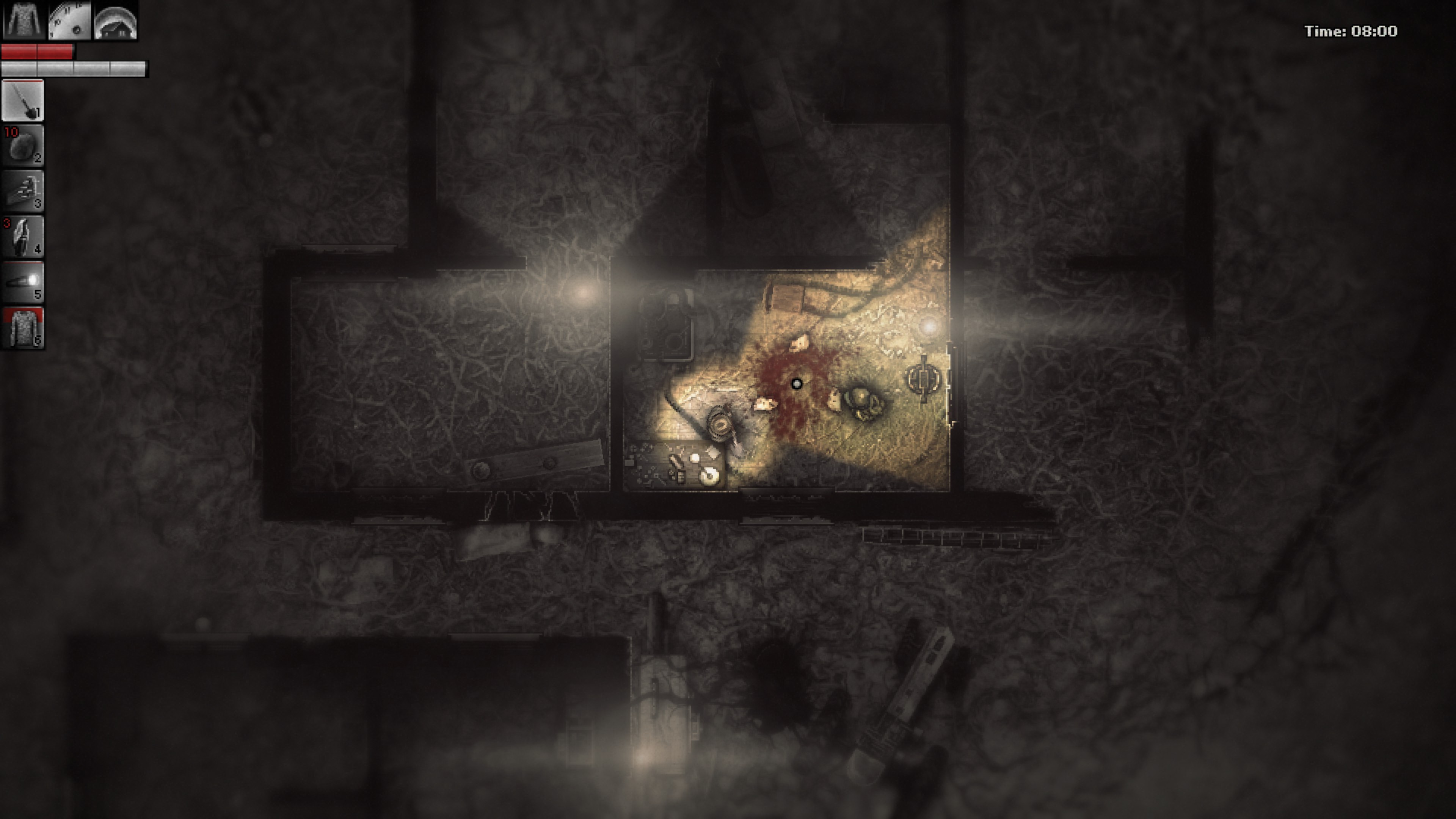 There are tons of items to collect and most things can be crafted into multiple items. Every base comes with some furniture for storing items if the workbench isn’t big enough (definitely guilty here!). Items will also remain on the ground if they’re dropped anywhere. One of the biggest drives is to craft new weapons. Weapons can also be upgraded with things like increased durability, less stamina use, more damage, etc. Ranged weapons can be crafted in mid to late game, but ammo is pretty scarce. Players can also choose to inject themselves with mutated plants and animal flesh in gain unnatural powers, but this comes at a price… 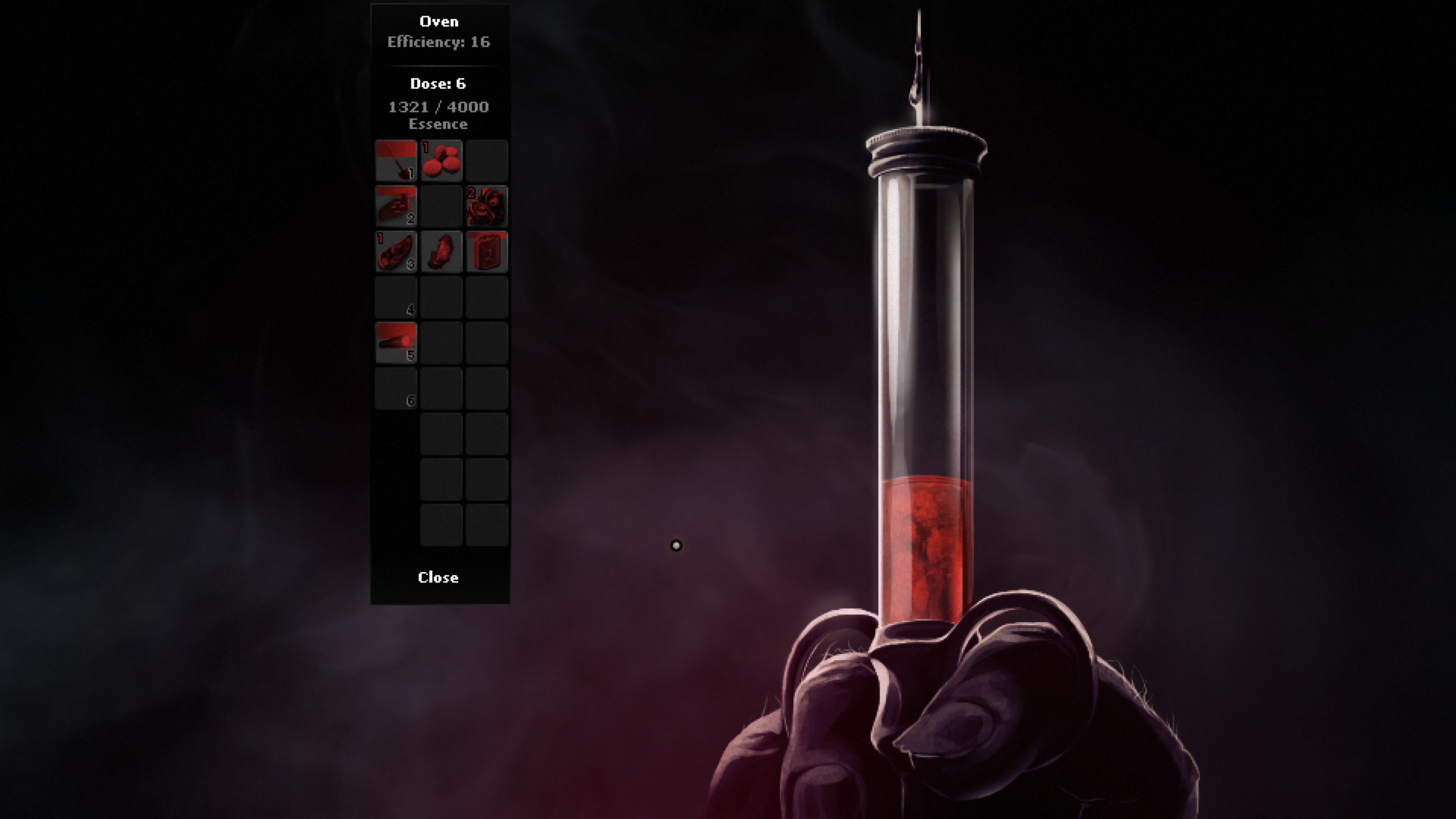 I had very few complaints with Darkwood, however the thing which frustrated me the most was issues with melee combat. I won’t claim to be a professional shovel wielder or anything like that, but it often felt like combat was usually decided by whichever party landed a blow first. Running away, kiting, and attacking all take stamina and many enemies will chase the player forever. The vast majority of enemy attacks will also interrupt the player’s attack, making it easy to get repeatedly chained by one enemy, especially in tight spaces. 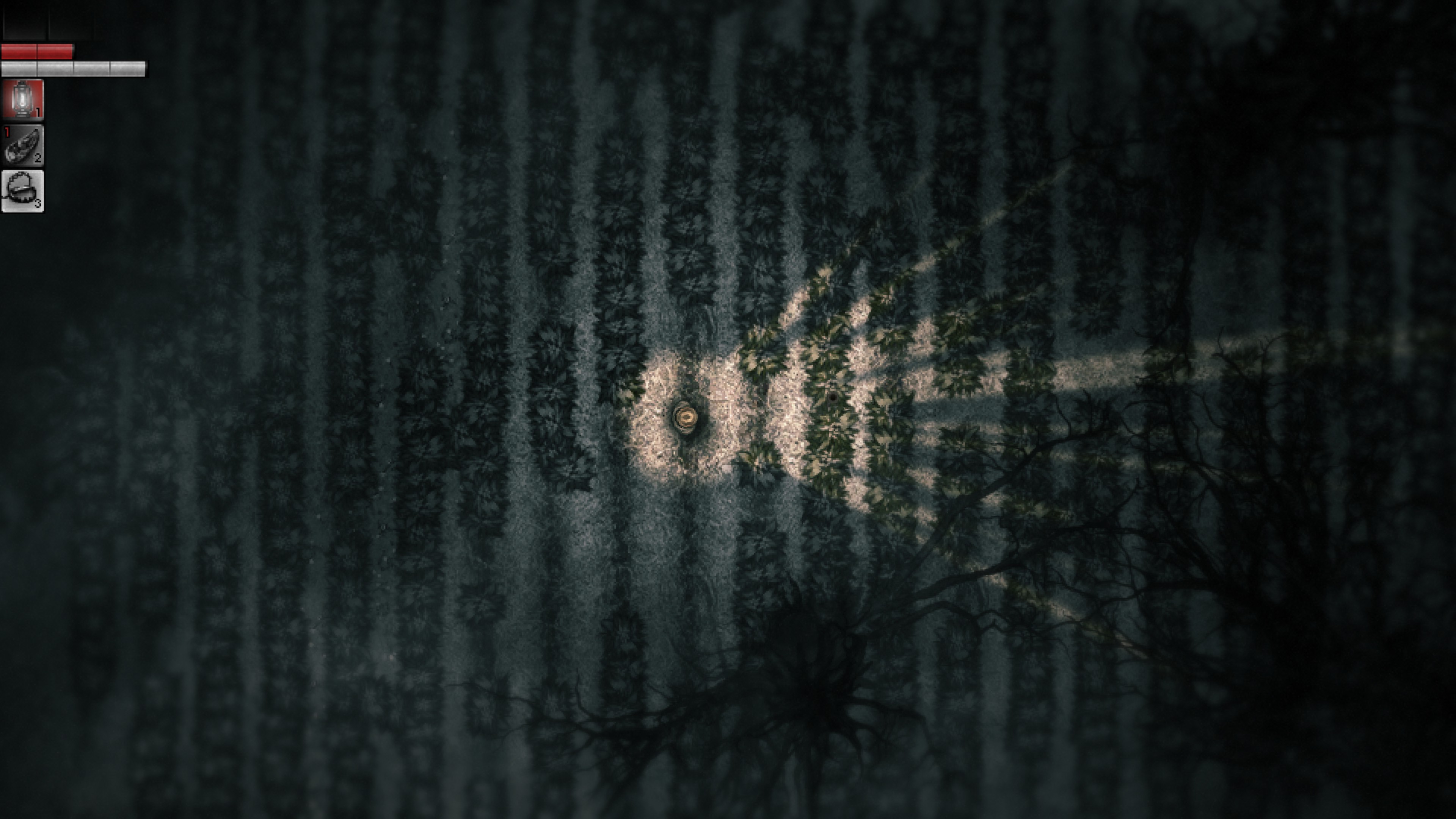 Not a good place to run into a rabid dog, just saying

I really enjoyed the unsettling characters of Darkwood. From their disturbing visual designs to their unusual problems. I liked making choices that affected their outcomes, even if I feel like I’ll have to survive through the game again to try out other scenarios. However I wish more information had been given for the main character and his backstory. After more than 10 hours I’d hoped that the game would’ve at least made an effort to address the idea of why the main character is in Darkwood in the first place. 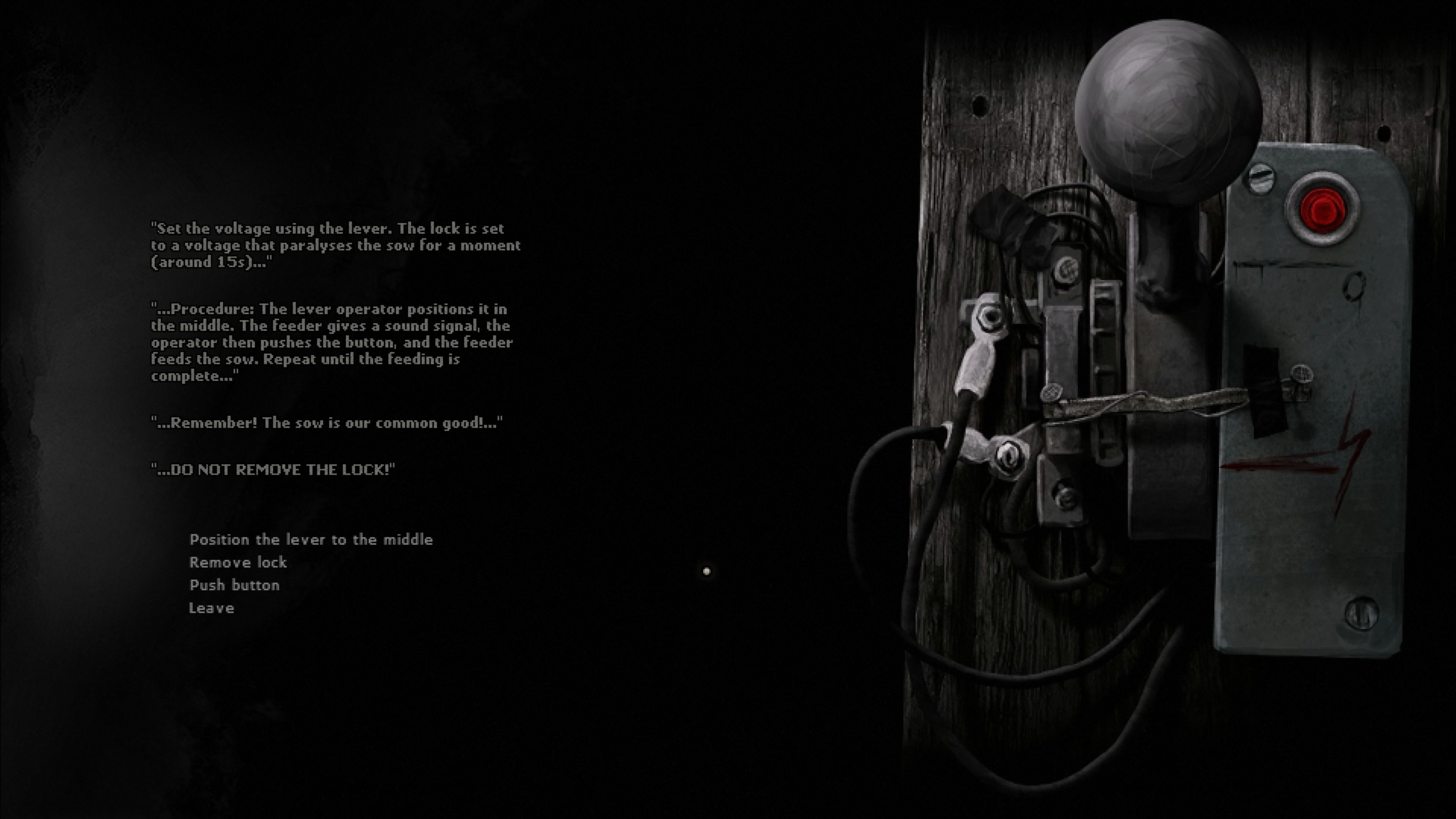 Make choices, live with the results

Overall I loved Darkwood’s atmosphere and the combat oriented survival aspects. I enjoyed focusing on interesting exploration and creepy characters over managing food and water. While I had some struggles with the melee combat and wanted to pull more from the story, I still greatly enjoyed my time with the game. I recommend Darkwood to all survival and horror fans, especially those that appreciate atmosphere over jumpscares.