Reclaim the surface world and build a thriving settlement in this post-apocalyptic city builder, Endzone – A World Apart. 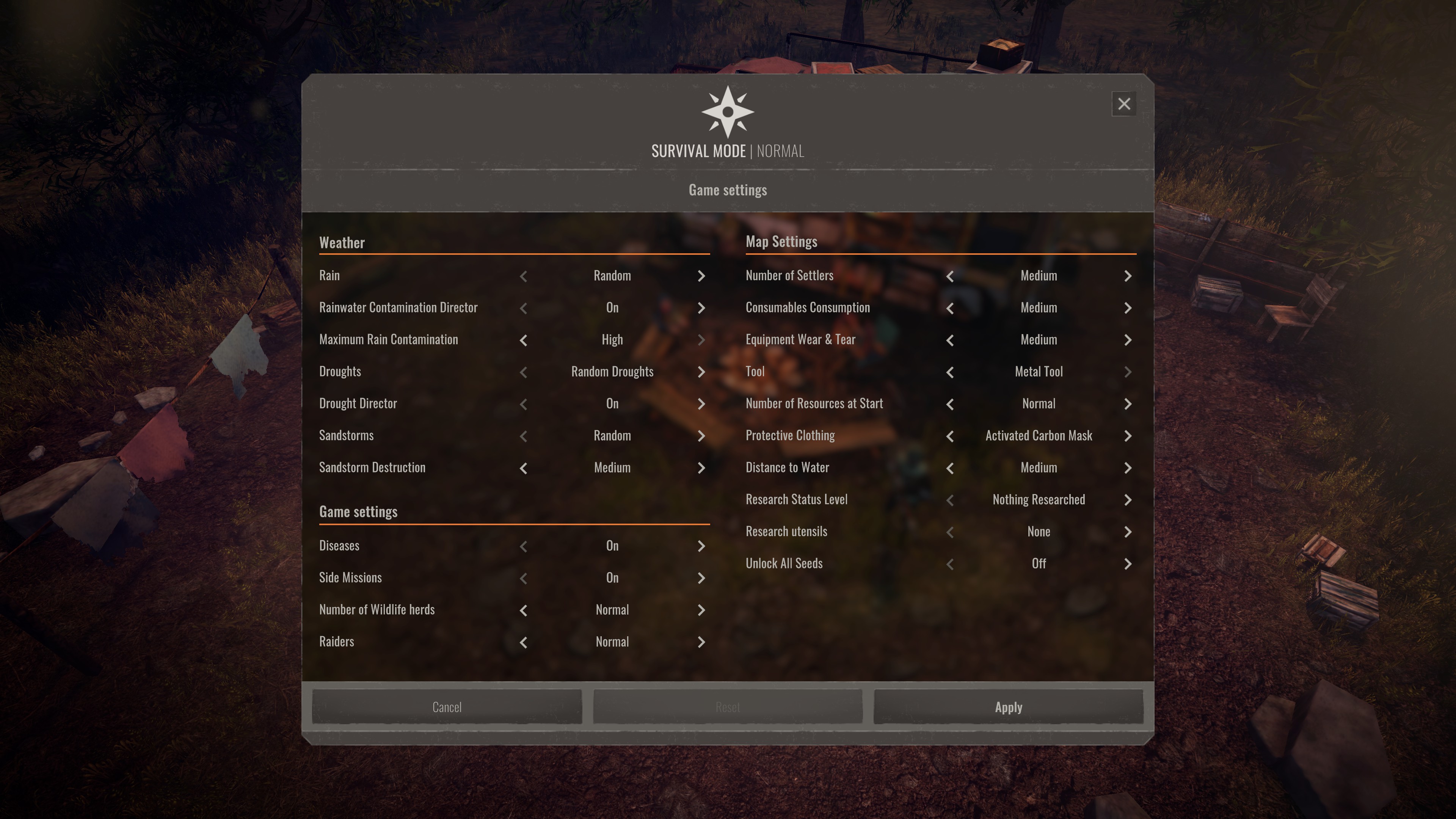 Endzone – A World Apart is a city builder survival game set in a post-apocalyptic earth. After 100 years living underground since humans ruined the environment and coated the planet in radiation, a group of settlers emerge from their bunker and try to build a settlement on the surface. Players take on the challenge of providing for these survivors, managing resources like food and water, and crafting things like medicine and radiation suits. Players direct the construction of buildings, collection of resources, and allocation of jobs. They can also choose policies like what kind of radiation protection to craft, plants to grow, and ammo to use. Both raiders and traders also appear once far enough into a run, allowing the player to barter trade deals or (hopefully) defeat raiders for random rewards. There are 10 directed scenarios (anywhere from 2-9 hours each) and an endless survival mode. In both cases, players can get semi-random mini-missions during the game from their settlers which can do everything from alleviate resource shortages to provide unique seeds or decorative buildings. 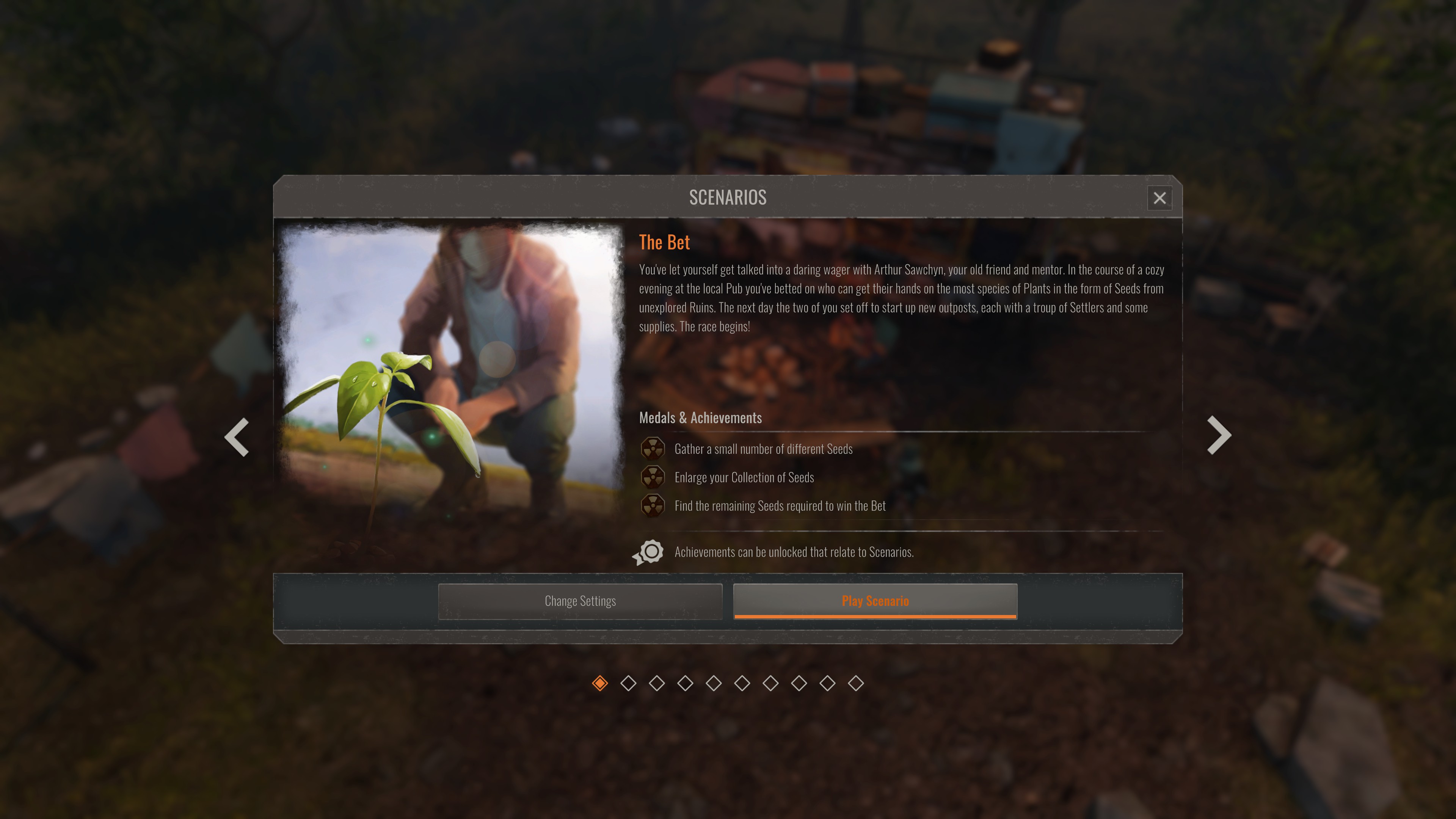 Scenarios can be played in any order

A lot of Endzone – A World Apart comes down to managing job allocation and resource production. Besides food and water, good tools are important for production speed and appropriate protective gear is important for keeping settlers healthy and able to reproduce. Population must be carefully managed, but can easily plummet if radiation levels rise too high and sterilize the player’s population. While managing all these resources, my biggest issue was managing controls and alerts issued from buildings. While the aesthetic of the game is well done and authentic, it comes at the cost of buildings not being very distinct. Even after more than 30 hours, I still have trouble locating buildings like the workshop or gatherer’s hut because of their visual similarity to other structures. This means I primarily rely on remembering while I placed buildings to quickly find them against. Building specific alerts suffer a similar problem, as they’re located above buildings on the map and no other place in the user interface. This makes it easy to miss alerts that are off screen or when zoomed far out. I’d have much preferred these alerts to be included with the settler alerts along the bottom of the screen.

Close up of the building designs

I’ve found that I play much of Endzone – A World Apart with the job assignment tab open. This is handy for easily assigning workers to jobs as they become of age, rebalancing assignments during shortages, or making better use of workers with nothing to do during droughts. However, one thing I found annoying was that workers would be automatically assigned to a building when the blueprint to build it was placed, not when it was finished. For a first building of its type, this is nothing more that a red highlight annoyance where the game alerts the player they have no one assigned to an “available” job, but later game when building a second, third, etc copy of a building, it can be a problem if the game moves some of the player’s current workers to a building they can’t work in yet. This can also be annoying for players that like to plan out their city by placing blueprints and then instructing them not to be started yet. Even if the workers have a building to work on, the game sometimes won’t let them finish a job. This is mostly just an annoyance as it only seems to happen for jobs where there’s a negligible difference between its current state and completing it, such as filling a watchtower with 99/100 ammo or repairing a building up to 97% health.

Scouting out locations of interest on the map

One of the things I enjoyed about Endzone – A World Apart was the environment and how players could interact with it. Close to the settlement, this would primarily mean handling loss of water during drought and the resulting loss of plants and potentially crops or dealing with contaminated rain spreading and heightening radiation into the settlement. Both of these have dynamic visual effects on the terrain across the map and make the world feel more immersive. Droughts can also bring sandstorms that sweep across the map and damage buildings. Later into the game, players can also start up expeditions and explore select ruins scattered around the map. While this might turn up usual resources like scrap, food, tools, etc. it can also result in more valuable things like new seeds for farming or research tier advancement. Research advancements are by far my favorite things to find, with higher tiers allowing players to do things like reintroduce electricity, collect scrap from sandstorms, and upgrade a number of buildings. The collector in me also loves getting all the seeds, but I found the different farm (and ranching) options to all feel the same and deliver roughly the same amount of food over time. 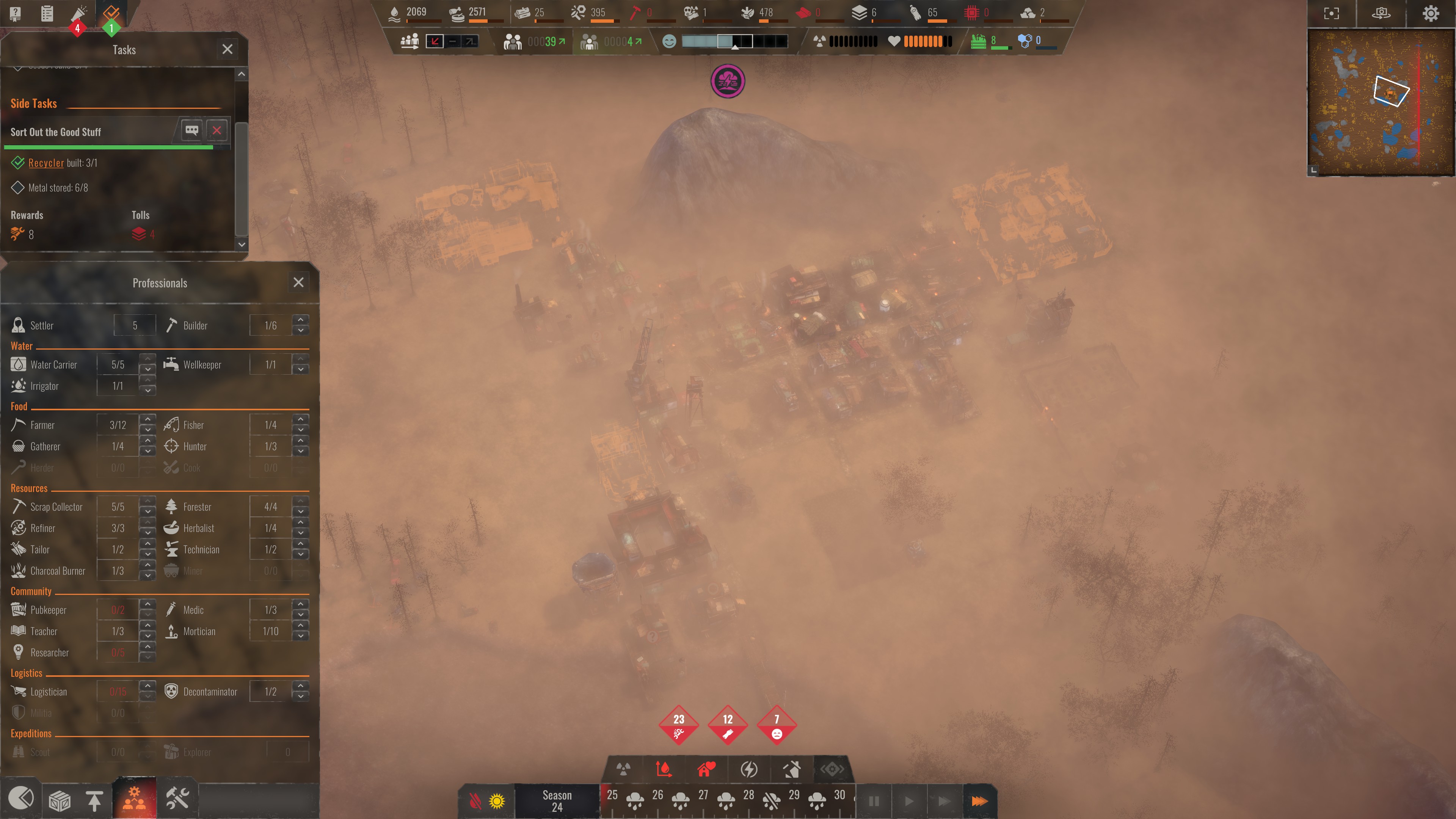 A sandstorm sweeping through during a drought

Overall, I greatly enjoyed Endzone – A World Apart’s different modes and scenarios. I liked the dynamic feel of the world and careful balance that is needed to keep a settlement alive and growing. I also enjoyed the optional side missions from residents and expedition missions, particularly as they allowed for unique rewards and research advancement. However I found that many of the buildings looked alike and building related alerts could easily go unnoticed. Some tasks also wouldn’t get finished 100% and job and food assignments had some minor annoyances. I’ve found the developers to be very responsive to feedback however, so have high hopes for some of these to be smoothed over with future patches. I recommend Endzone – A World Apart for city building fans, particularly if they enjoyed games such as Banished or Frostpunk.