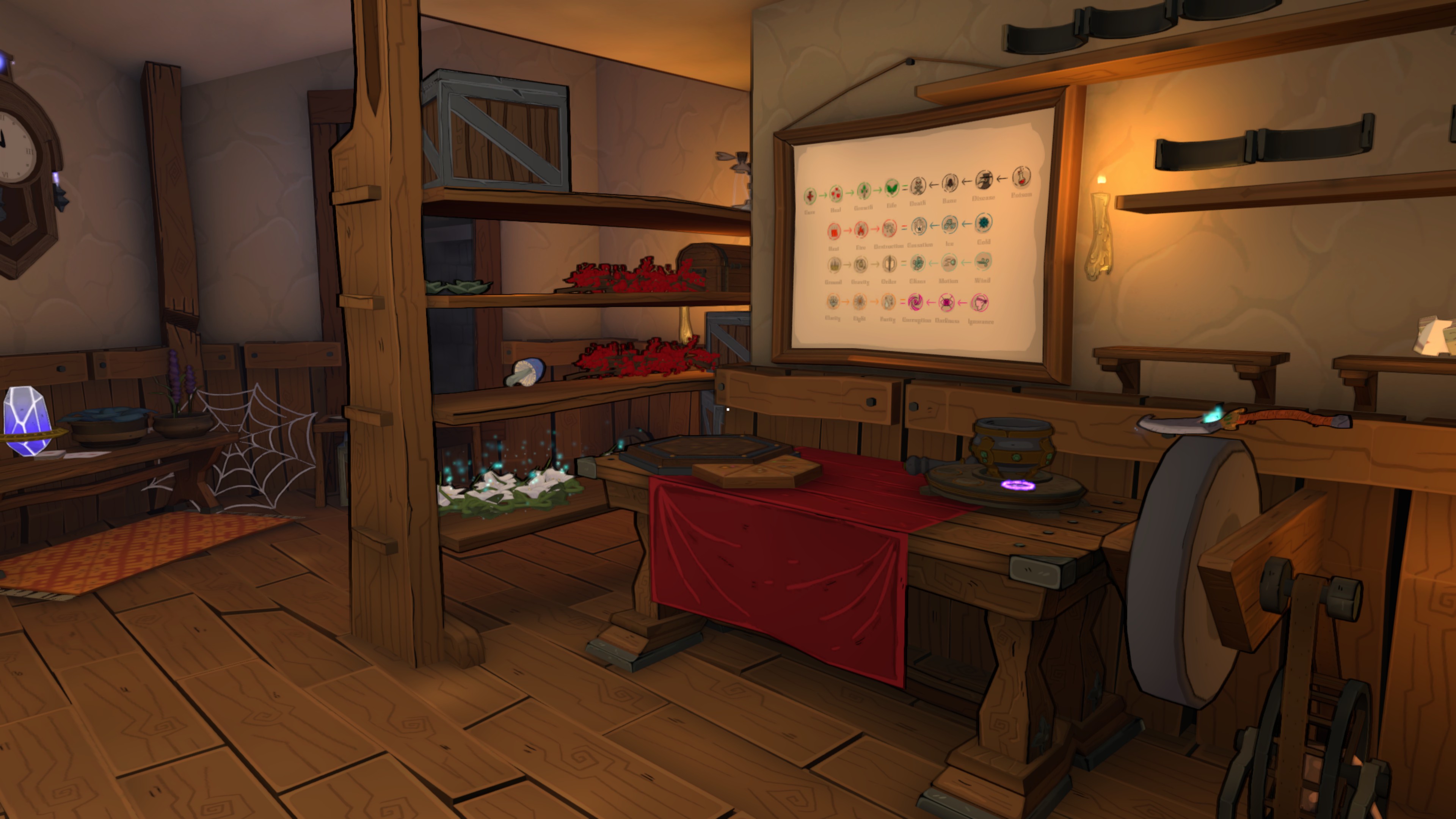 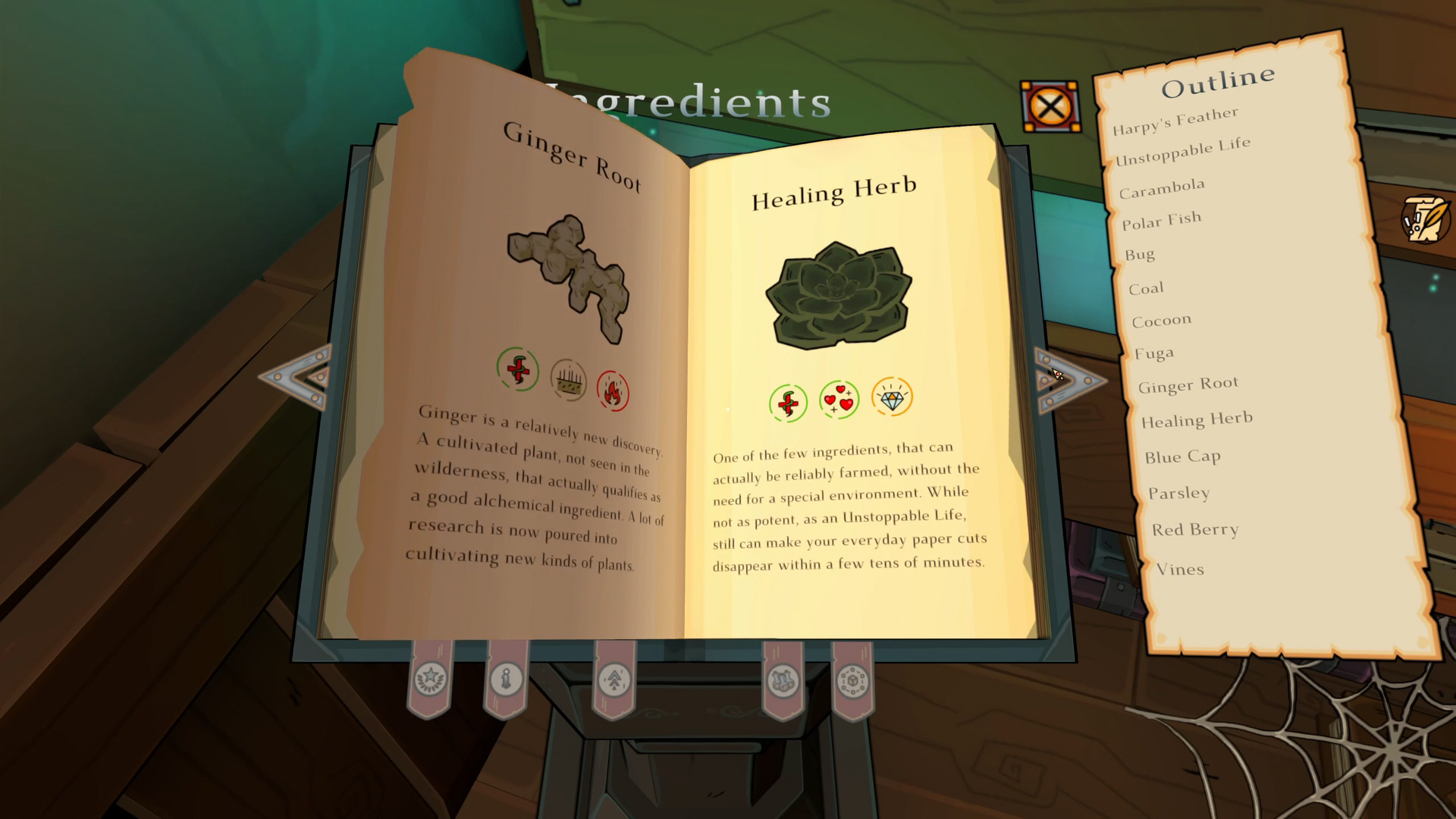 Known ingredients and their elements

Alchemist Simulator is a time-management game where players try to craft and sell potions. Most potions can be crafted in more than one way, requiring players to memorize different crafting recipes to maximize time or profit. There are also 3 quests each day, with some following storylines with pop culture references and others teaching the player new potion recipes. All ingredients and potion recipes are stored in a book, but the player still has to memorize what ingredients make what potion elements as there’s often more than one option. 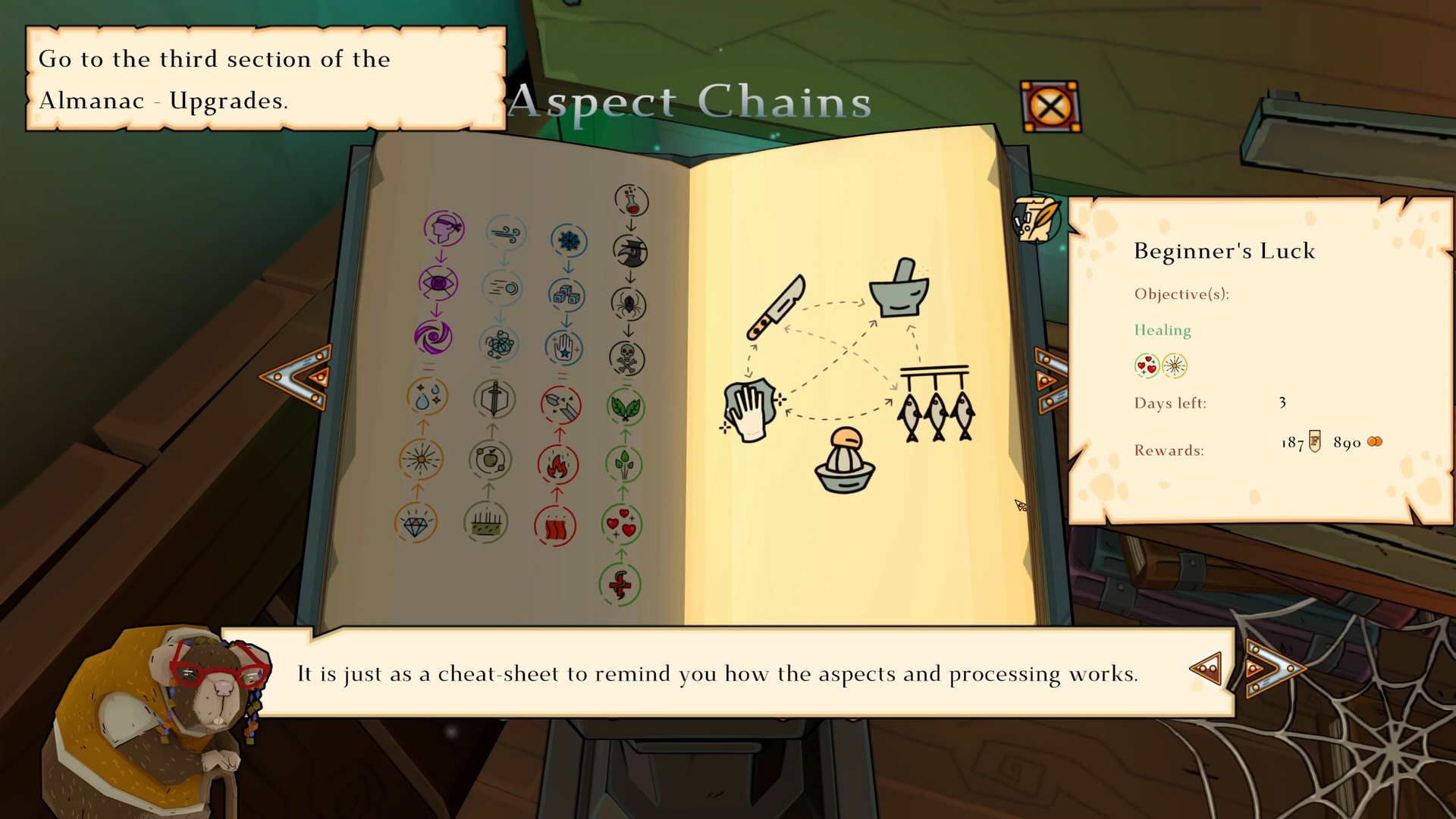 Cheatsheet of how to manipulate elements for potions

In the beginning, quests mainly teach the player new potion recipes. As the player learns more recipes more clients will submit orders, sometimes spanning several potions rolled into a single order. I found the questlines to be rather amusing, with most of them containing pop culture references and parody figures. Players can also make potions purely to sell and one potion each day is sold at a higher price. Players can’t actually see these prices though, making maximize profit difficult and often more reliant on players minimizing the cost to make each potion. 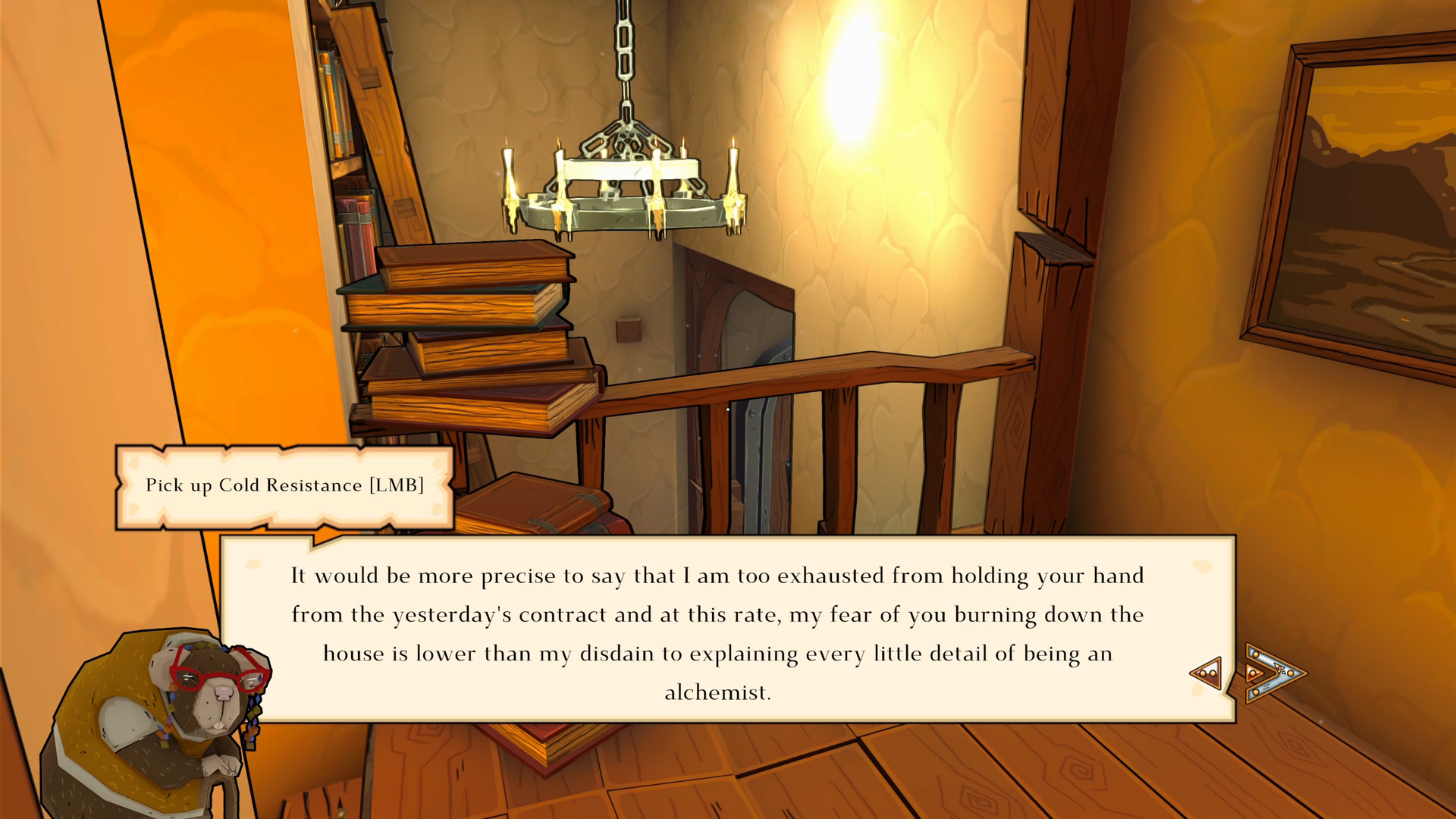 I also had some technical difficulties in selling potions. Often potions could not be turned in / sold using the assistant. I think this had to do with whether ingredients were being delivered, but it led to a lot of shuffling back and forth trying to click on the assistant from different angles as if that might suddenly work. I also had frustrating issues with ingredients frequently disappearing overnight, which was particularly common on the dryer. Moving ingredients or potions to dedicated shelves seemed to avoid this, but the game neglects to ever tell the player where they can place ingredients that have already been processed. Despite being frustrated by this and trying to place ingredients all over the place, I failed to find the dedicated shelves right in front of my face because the hitboxes were so small. 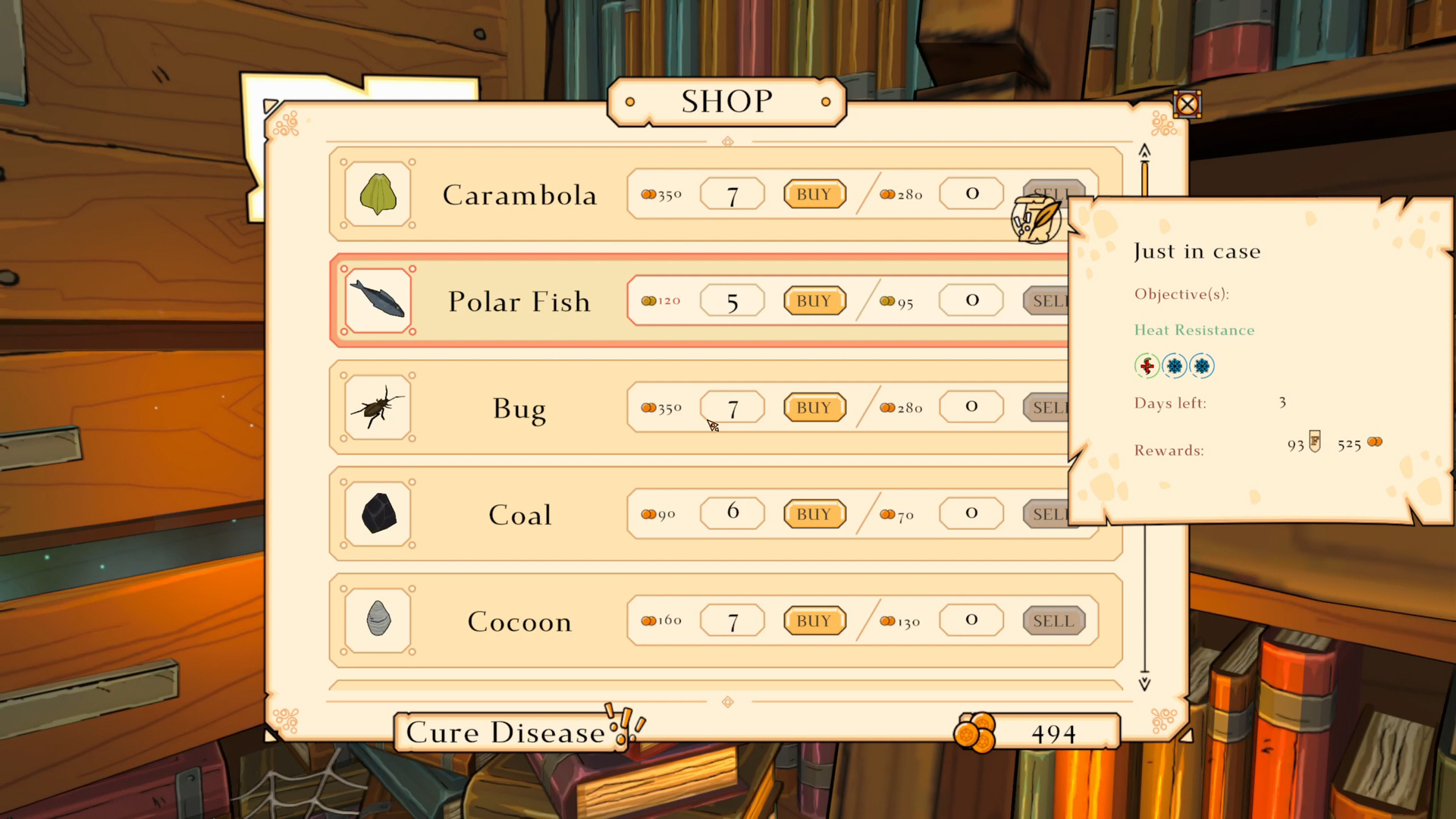 The game had a few other minor annoyances, such as framerate issues. These seemed to be mitigated by lowering the resolution, but this garbled much of the text in weird ways. There are also a number of unlockable upgrades in the game, both that come from story progression or that can be bought with the shop profit. However, most of them aren’t terribly useful and have no meaningful impact on gameplay. 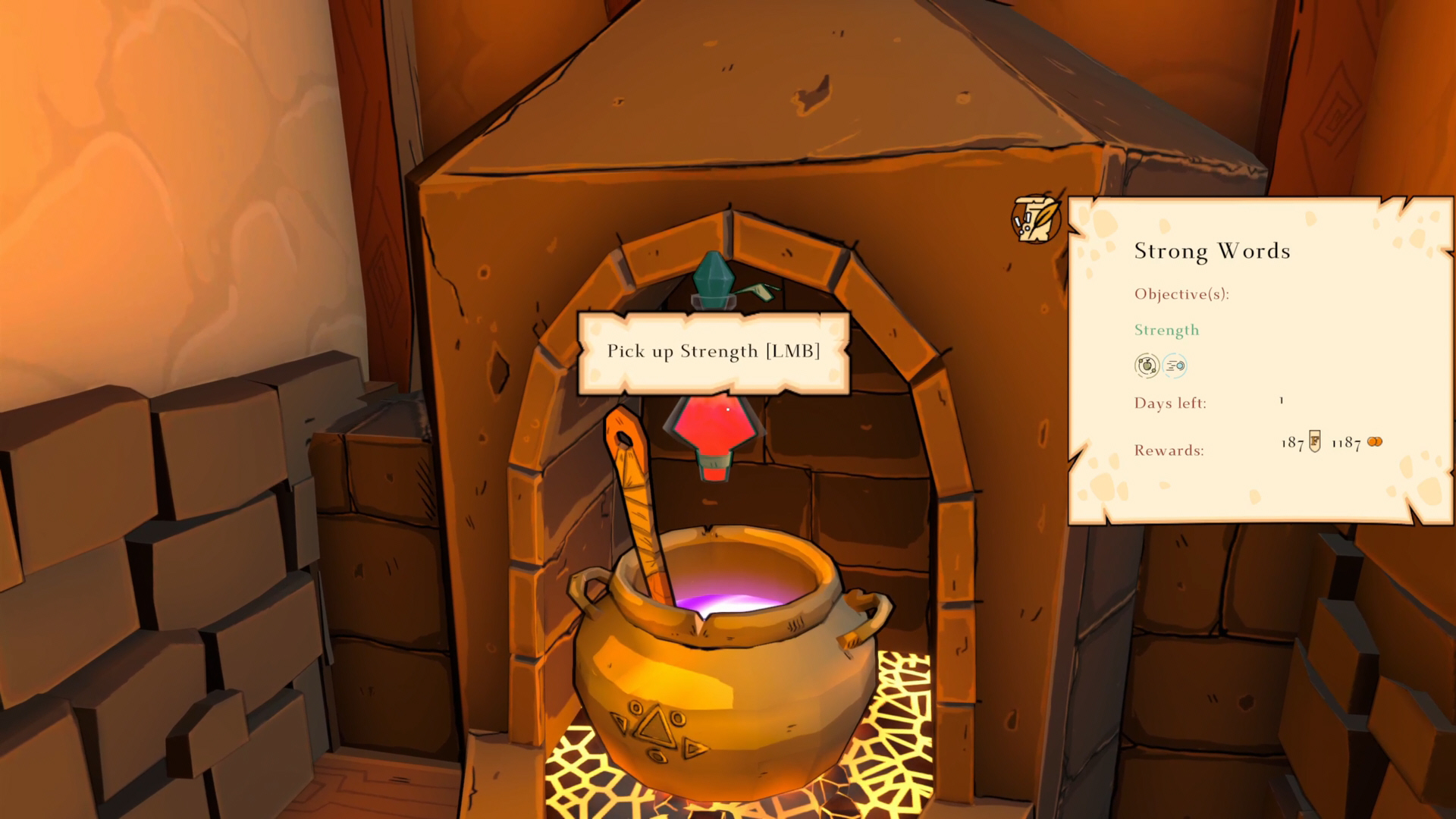 Crafting a potion for a quest

Overall, I enjoyed Alchemist Simulator as a casual time-management game. It rewards planning and memorization more than quick reflexes, making it a more relaxing addition to the genre. It’s not without some polish issues, both around framerate and explaining some of the minor mechanics. I also had technical difficulties with interacting with the assistant and ingredients disappearing at night. Maybe these were intended, but if so I wish they had been better explained. Regardless, I recommend Alchemist Simulator for players looking for a casual first-person time-management game that don’t mind a good bit of memorization.