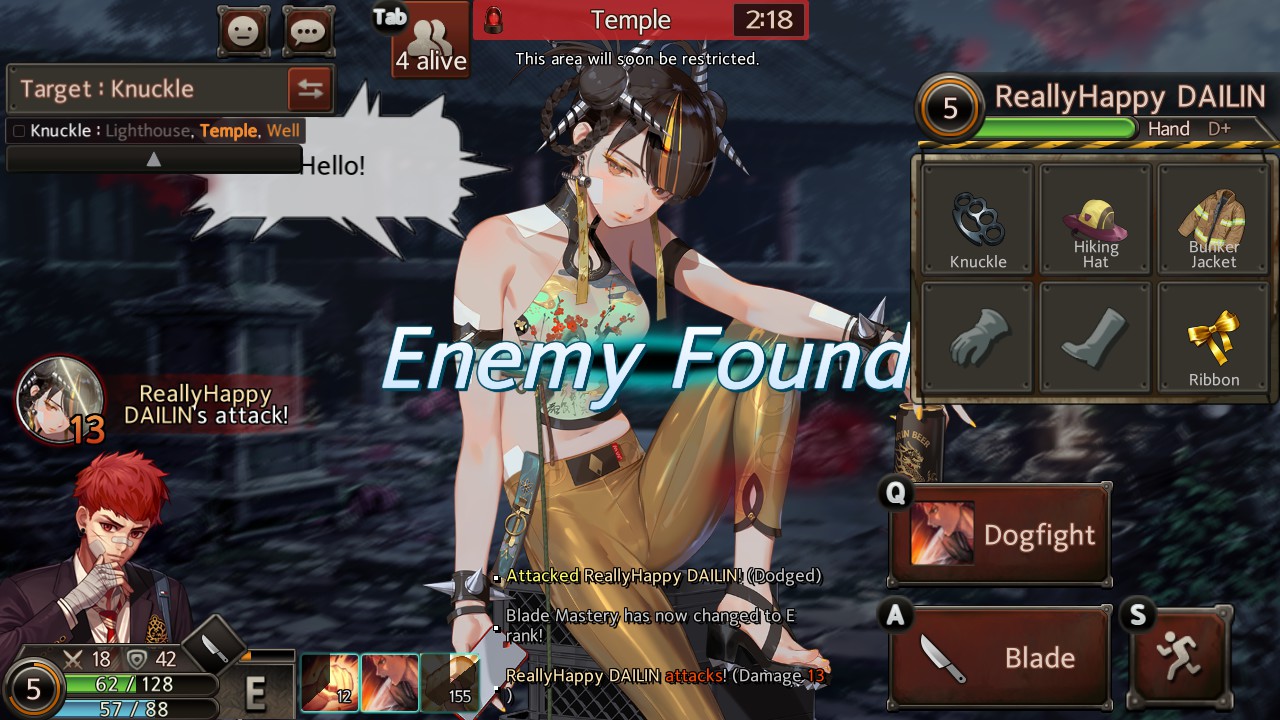 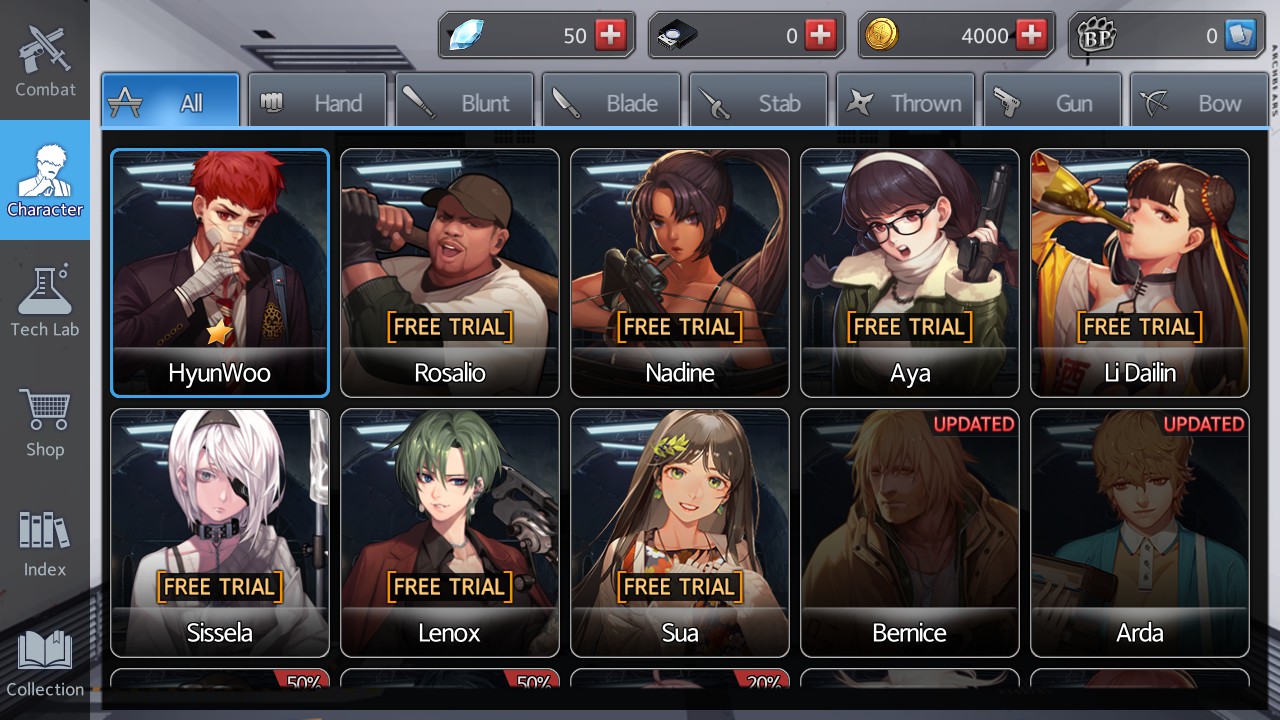 Lots of unique character are available, with several on a free rotation each week

Black Survival offers players quick action with real time searching, crafting, and battling. Every 2-3 minutes areas of the map become restricted zones, killing any players that have not vacated. Players fast travel to areas around the map, with nearby fights and trap triggers providing alerts. Running into an enemy allows players to attack them or use combat specific character abilities. Searching, crafting, healing, etc all take a few seconds and most actions use up stamina. Players balance their stats and inventory while making decisions every few seconds. The other players operate on the same clock and can freely attack players they find whom are standing still. 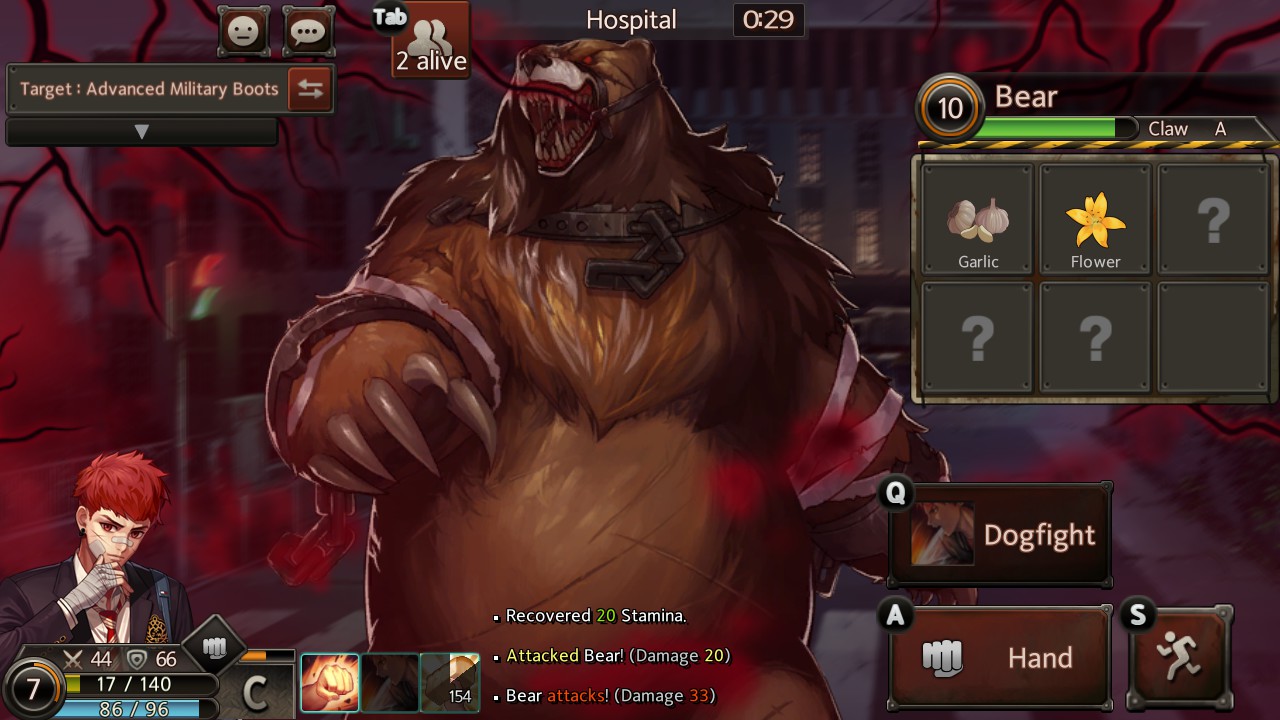 The tutorial for Black Survival is pretty decent. It introduces the basic mechanics and how to play the game. There’s also practice modes and matches against bots to improve player familiarity with the game, but I found it was necessary to read the in-game guide. For example, hacking is never mentioned as a potential win condition anywhere else. But the basic tutorial does get the player into the game quickly with a decent shot of getting some early kills.

Some of the guide information about hacking

As I new player, I found Black Survival to have an information overload. There were so many items to be searching for and it was hard to tell what was best for my character. Text pops up quickly to tell the player what’s going on nearby, but it’s tough to find a moment to read it while looking through the menus or reading affects. I recommend taking time out of game to understand some of the weapons and armor options at the very least.

There are 7 weapons types, each charcter has a preference but can be trained to use anything

For experienced players, the game supports keyboard control to quickly menu through searching, crafting, using items, and combat. Once players know what they’re doing, this is much faster and smoother. The mouse is still necessary, but I very much enjoyed the keyboard input and felt it added to the experience.

The most frustrating thing for me was random search results when trying to find items. Often I found myself needing a specific item to complete a crafting recipe and trying to dig through a location to find it could take forever. I also didn’t like that when finding items, it wasn’t always apparent if it was better than something I had equipped and I couldn’t do a comparison before deciding to take it or toss it. Items in inventory can be dropped, but that takes extra time!

Death timers are per character and last 1 hour by default

Overall I found Black Survival very enjoyable and I’ll definitely be playing more of it. It’s originally a mobile game, so I was more than happy to download that too. I enjoy the fast pacing and crafting, without the precise aim and bush wookies of a typical battle royale. New players should expect to be able to get right in, but also to do a little reading to fully optimize their searching, crafting, and character ability strategies. I recommend Black Survival for players looking to get into a fast paced PvP strategy game without the instant death found elsewhere in the battle royale genre.