Soulless: Ray of Hope is a puzzle platformer with a colorful world and expressive music. Players use basic mechanics and items to complete both relaxed and rushed puzzles throughout three acts of the game. The game also features three endings based on your final choices, in addition to collectibles and secret rooms.

One of the more beautiful levels 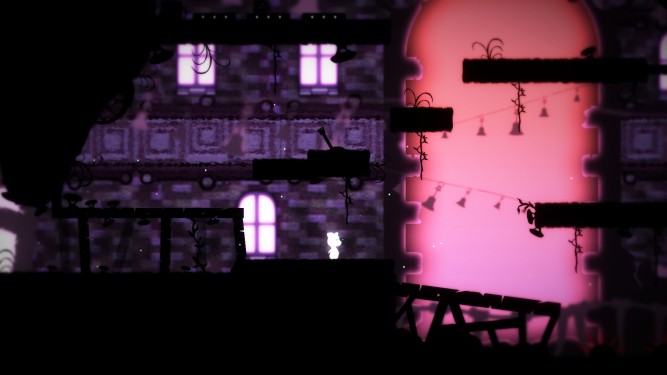 Levers don’t stand out against the background

One of the most appealing things to me about Soulless: Ray of Hope was the colorful art style. Each world you travel through uses a different color palette for the background, with black as the primary color for the foreground. The main character is one of the few purely white things in a dark world, which matches the mood of the game pretty well. Throughout the game you have a feeling that the world is hostile to you and that, as one creature you encounter admits, they would eat you if they could. The scenery fits well and gives a haunted or corrupted feel to most of the stages in the game.

Visually my favorite level in the game

The premise of the story at the beginning is that you’re trying to find your friend. Mostly a small wisp-like character tells you repeatedly that you need to find your friend, and that’s about it. Then right before the end, the last character you meet dumps a whole bunch of story on you in a quick unceremonious fashion and makes you choose your ending. There wasn’t really any player experience to this way of delivering a story and felt more like an excuse to end the game since there was no climax to the game play.

Story cutscenes were unclear and never tied together.

There are secret rooms and collectibles in Soulless, although I was only able to find one of the collectibles and none of the secret rooms on my first playthrough. I’d be interested in going back and finding more of them to see if that provides more of a story, but the gameplay doesn’t really have much replay value.

This was a cool looking room, maybe something was hidden here?

There was one “boss battle” in Soulless, but despite the appealing visuals, I found the fight unenjoyable. Both your attacks and the boss’ are dependent on RNG. The environmental hazards that aren’t RNG, you dodge by jumping back and forth between two “safe” locations. These aren’t marked, but after you get a handle on how the boss’ RNG attacks work, you’ll figure out where they are pretty quick. The rest is just minding your jumps while you wait for RNG to place your attack objects in a place where using them will do something useful. RNG determines the difference between the fight lasting 2 cycles, or more than 4. I did however enjoy the way the boss’ health was indicated in the environment. Oil lamps in the center of the area count the hits you still need and flicker out when you land a blow.

Boss battle, the torches before him mark his health

All of the puzzles and platforming in Soulless are pretty basic and straightforward. None of the platforming is complicated. The player’s only moves are walking left and right, jump, and using wings to slow fall after a jump. The puzzles were focused on your ability to path through them instead of actually figuring out what needed to end up where. Despite how often I died due to my own poor platforming skills, the game was not very frustrating and it was easy to get up and try again.

Simple platforms and levers, but don’t hit the thorns

Puzzles were balanced between unlimited time puzzles spanning a limited space and chase based levels where the player quickly solved puzzles to avoid being consumed. At first I didn’t like the rush levels, but after I settled into the rhythm of it and how the wings’ glide mechanic worked I found the breakup of pace enjoyable. The chase levels also had a necrotic feel to them, which I found contrasted nicely with some of the more pleasing main world backgrounds.

My one issue with chase levels was that certain objects in the game were poorly highlighted. This made them easy to miss under rushed circumstances. Of particular note were levers and “missile launchers” which tended to blend into vines and other curved silhouetted objects.

Missiles are highlighted, but their launchers can blend in with vines. Especially large ones.

Soulless: Ray of Hope made a lot of promises about its content when it was released. Unfortunately I found most of those to be unfulfilled within the game. Of greatest note were: “Challenge yourself with intricate puzzles, cryptic bosses and refreshing gameplay” and “Experience a deeply moving personal journey” (quotes taken from the Steam store page). This review focuses mostly on what the game did, without the context of what was advertised for it. If you have specific questions about how it measures up to promised features, feel free to contact me or ask in the comments below.

Overall I found the game mediocre with nice graphics, simple gameplay, and unfortunate story execution. There was some fair diversity in puzzles, but nothing was complex. If I was better at platforming, I’d probably call this game relaxing (and have beaten it much faster). It’s not frustrating though, so if you’re new to platformers and want somewhere comfortable to start, you might consider picking up this title on sale. Unfortunately it falls short of most of its advertised features.