Typoman is a puzzle platformer which uses words to affect the environment and combat enemies. Both enemies and environment are composed of words that tell the player how they will behave. Players rearrange letters to change word meaning or create new words in order to progress.

Sometimes the platforming is literally spelled out 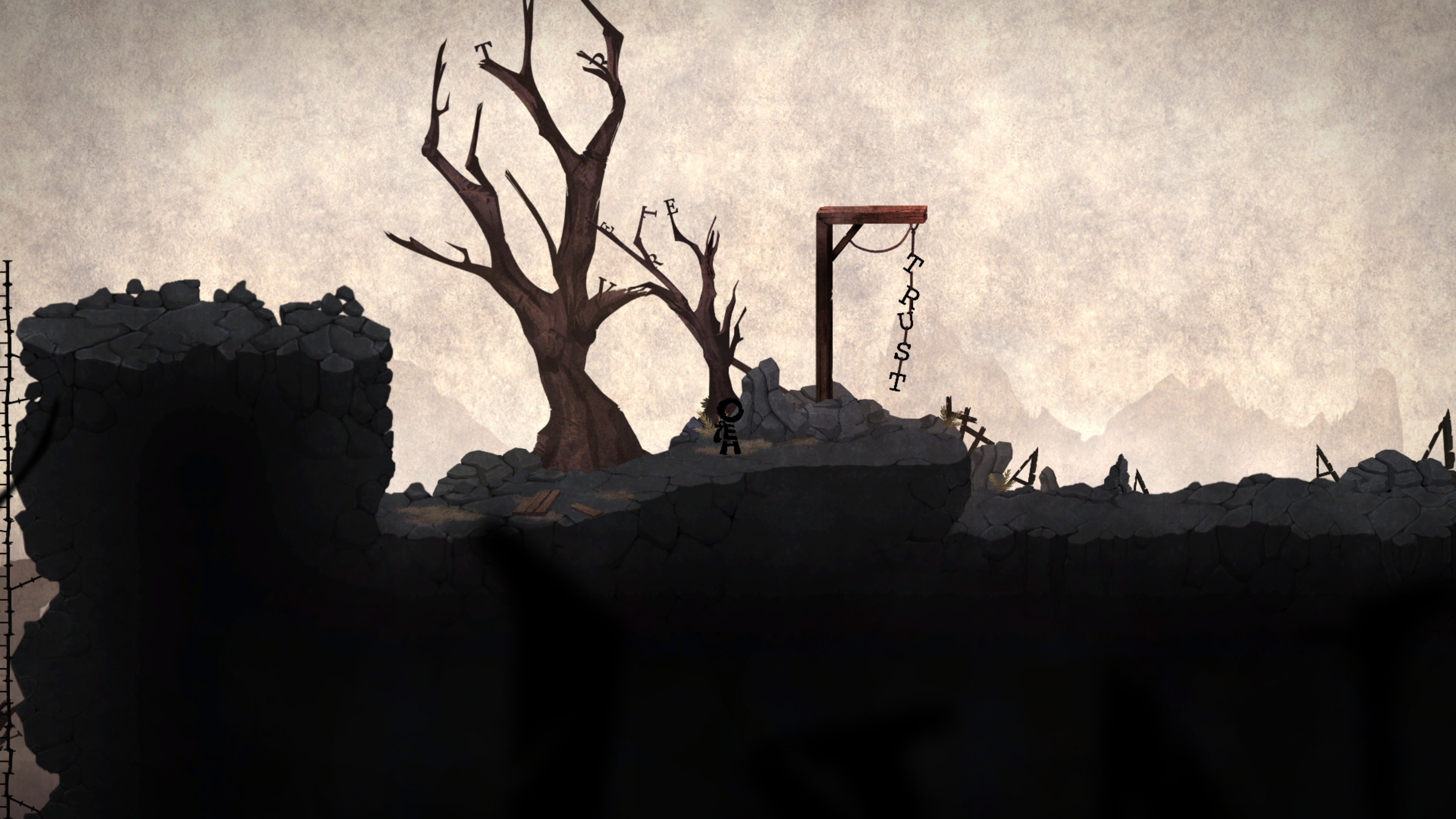 The main character searches for his other arm

For me the main appeal of Typoman is the word puzzles. Words such as ON, LIFT, OPEN, etc affect the environment to allow progression. Characters and objects are also composed of words. The main character is composed of the word HERO and searches for his missing arm which is a P, allowing him to become HOPE. Enemies are composed of words such as DOOM, FEAR, GREED, etc and players must run or construct words such as LOVE, LIFE, GOOD, etc to fend them off. 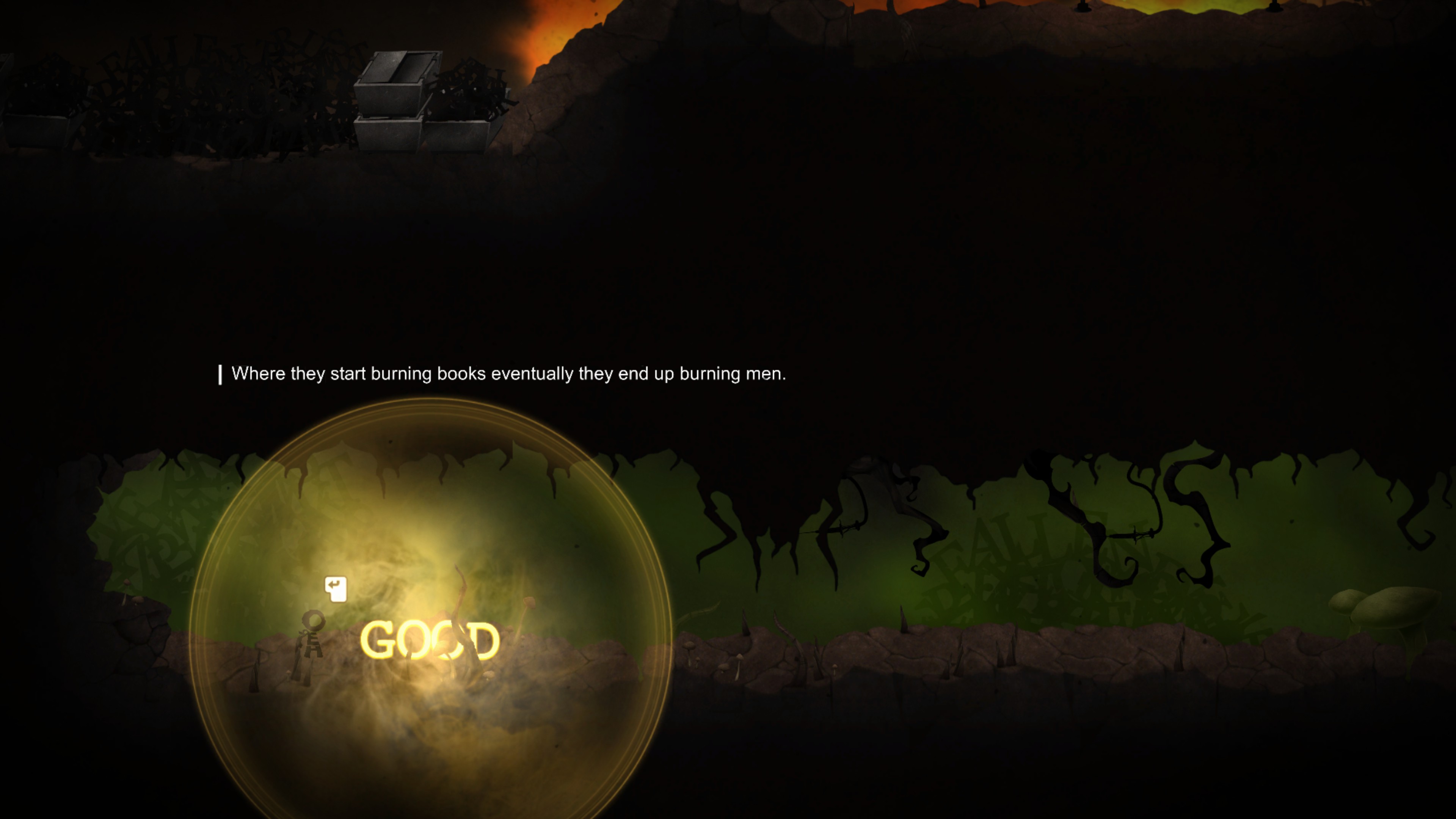 One of my favorites quotes from Heinrich Heine

The platforming of Typoman is pretty basic, mostly jumping over gaps. The majority of the gameplay is linear, but occasionally there’s a subtle path leading off that players can follow to get a quote. These quotes both communicate the story and act as collectibles. The story focuses on war, propaganda, and oppression, but skips out on the adult details. The ambient environment also changes from a warfront-esque scene to one of cold machinery.

Although the platforming is pretty basic, I’m notoriously bad at not jumping to my death. I was also bad at the rushed puzzles where players needed to figure out a word to create to save them when being cornered by an enemy. Both of these lead to me dying repeatedly and wishing the respawn timer was faster. Even after the character’s body has disappeared, the camera continues to sit there and stare at the death location for a few seconds. Perhaps this was done to give players time to look at what happened and figure out how to do it properly, but for me it was just annoying to wait with no way to skip forward to respawn.

I wasn’t the biggest fan of the boss battle execution. I felt like the developers thought I had two pairs of eyes. I needed one pair to watch the enemy / enemies and another to look ahead to the letter collection I was coming up on and plan what word I could spell to save myself. Needless to say, I died a lot there too. Dying is fine, I was just frustrated that it didn’t feel like I was set up to be able to beat it on the first attempt. It kind of takes the intimidation out of a boss or mini-boss when you have to memorize their upcoming behavior and know what word is waiting up ahead to save you.

There were some fun extras in Typoman, like easter egg words that would produce related effects. Some I found were: RAVE which produced multi-colored lighting effects, DEATH which instantly killed the main character and turned them into a gravestone, and VALENTINE which caused the main character to gain a smiling face with hearts for eyes. After completing the game, there was also a mini-game to try to create a special word from a limited letter set and the ability to turn words into their opposites (eg. GOOD -> BAD). 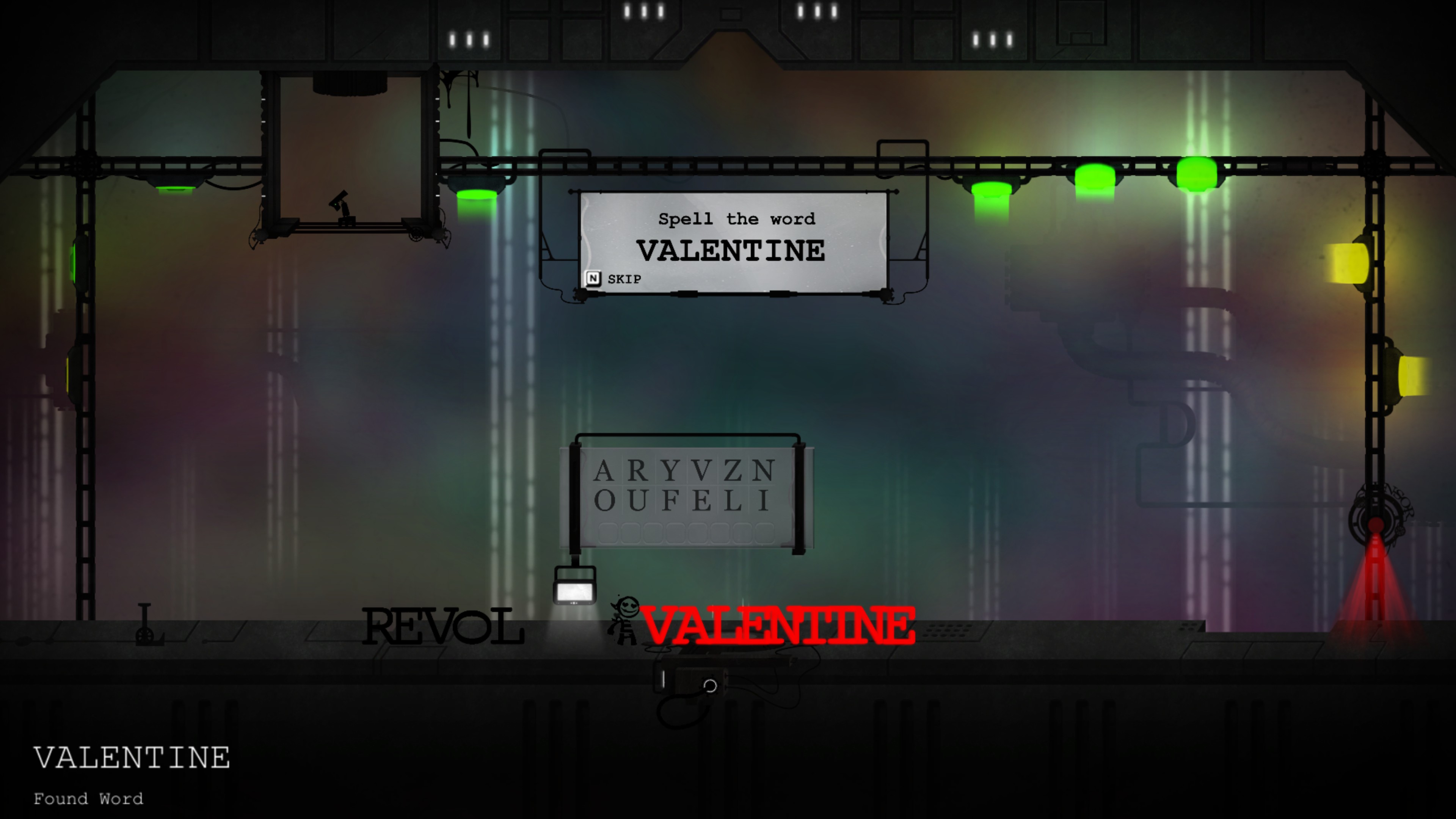 Optional mini-game after completing the story

Overall I really liked Typoman. I found the mix of platforming and word puzzles to be really cool, although I wish it had been expanded more. The rushed puzzles and boss fights weren’t my thing, but I imagine more action platformer oriented players might enjoy them. I also really liked finding the collectible quotes and following the story. I would recommend Typoman to fans of word puzzles and platformer games who can appreciate the darker themes of its story.