Explore a procedurally generated world and engage a variety of enemies in tactical turn-based grid-combat, in Urtuk: The Desolation. 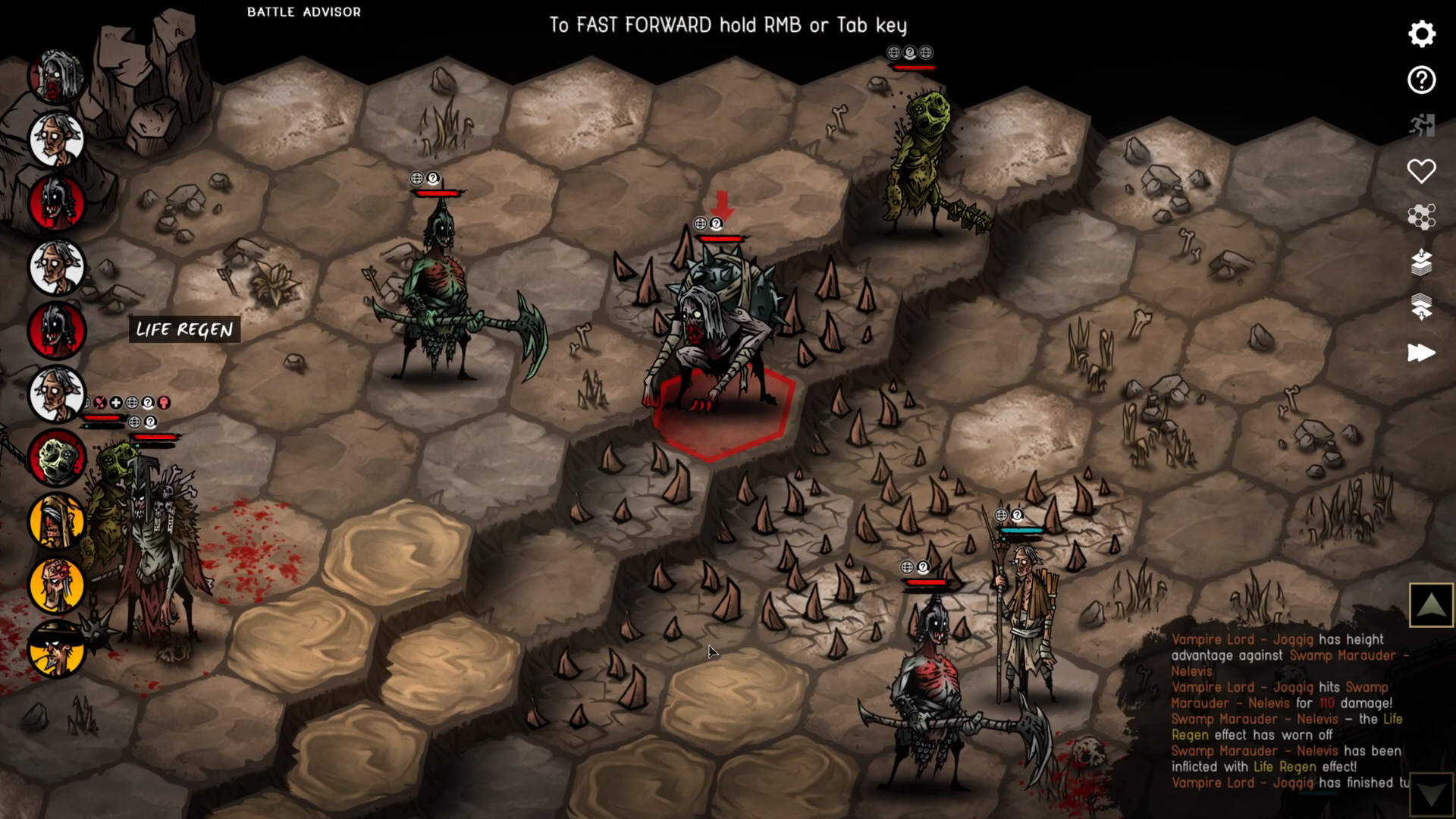 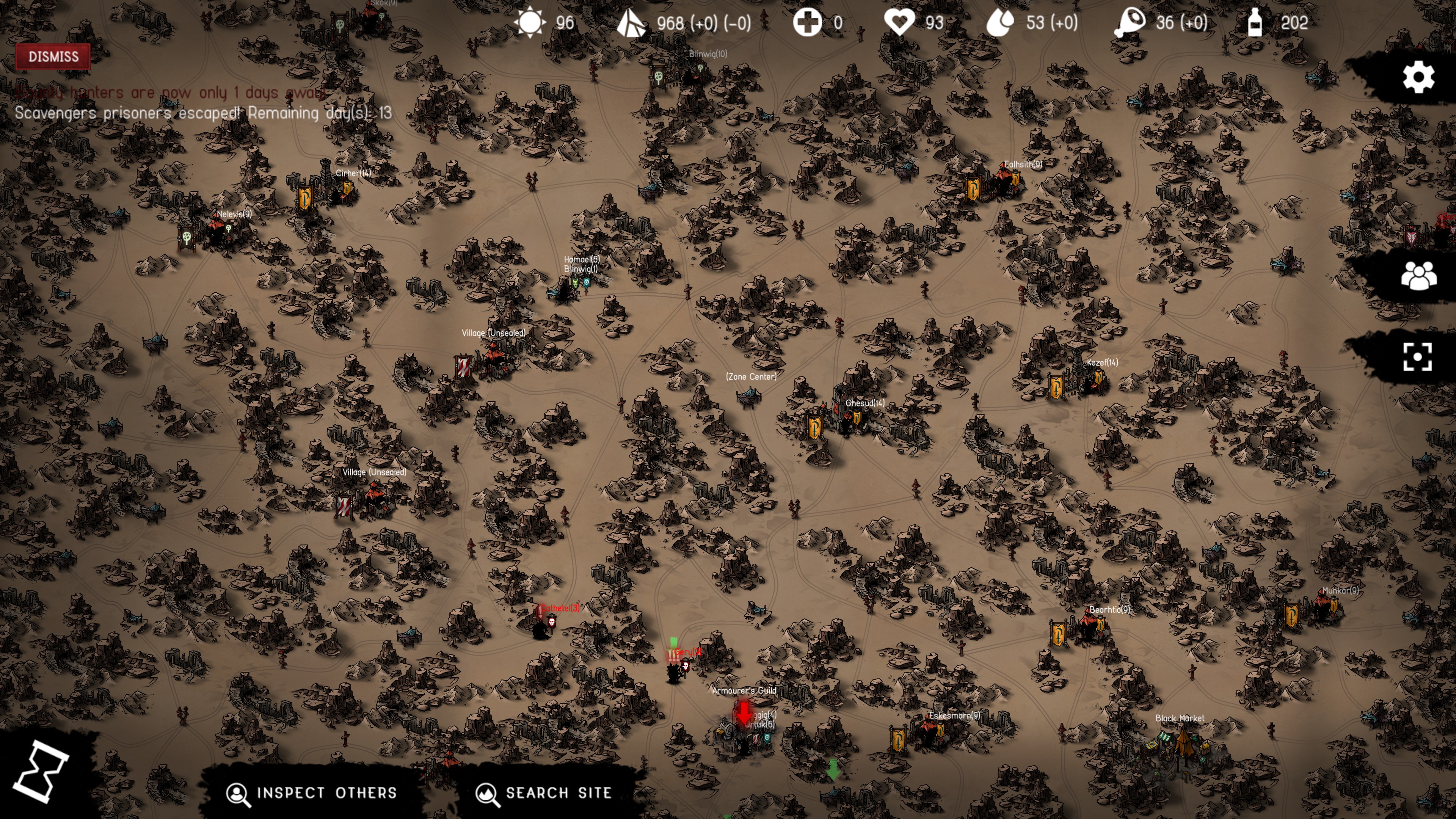 Part of an explored first zone

Urtuk: The Desolation is a tactical turn-based RPG in which players lead Urtuk and his band of followers through inhospitable lands in search of a cure for Urtuk’s mysterious mutation. The land is ripe with bandits and monsters, meaning most progress is made only by extracting it from the bodies of fallen enemies. Urtuk’s quest for a cure will lead him deeper and deeper into the world through increasingly inhospitable zones with new and more threatening enemies and random events. Each map is procedurally generated and characters can customize their starting characters and items from 11 different classes. Progression through the game also unlocks more factions to start as and an additional Desolation difficulty for a total of 5 difficulty modes. 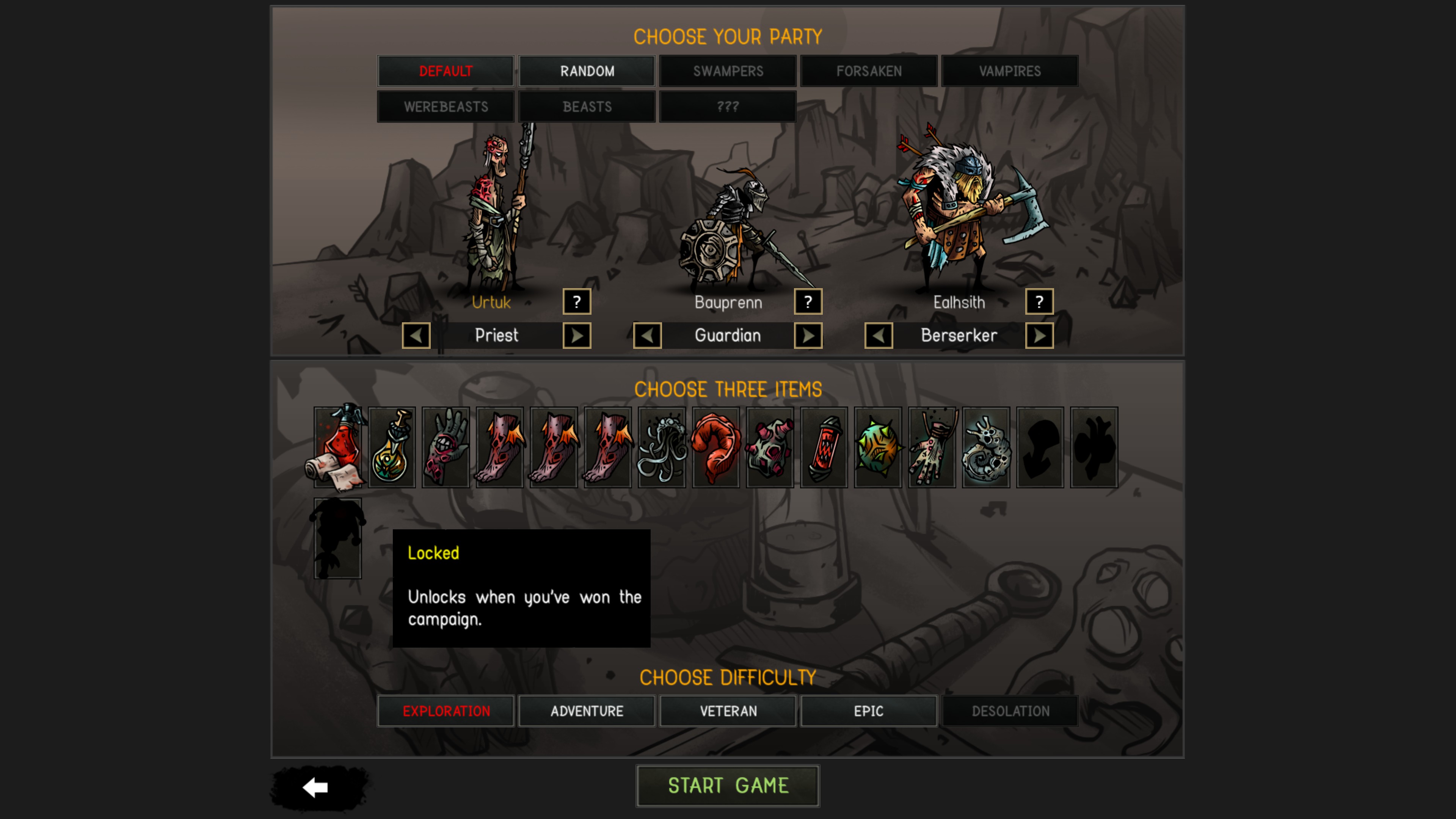 Each class has different equipment, skills, and starting stats. Equipment is primarily gained randomly through battle, and stat points are given each level. Characters will gain experience based on their participation in combat, so don’t expect low-level characters idling in the back to gain anything from the work of others. In addition to their equipment, characters can also equip mutator items that offer additional traits. Low-level mutators will cost a percentage of maximum HP to equip, but by combining mutators of the same type, this cost is lessened, eventually offer additional HP and in some cases bonuses to the trait it brings. Using the same mutator item on a character long enough provides the option to absorb its effects and make them permanent, freeing a slot but locking the mutator at its current level.

Equipping items and mutators outside of combat

Enemy and NPC AI can be a little confusing. I’ve encountered enemies that did nothing the entire fight, even when they could’ve attacked me, and allies calling for rescue that almost immediately run in and get themselves surrounded. Enemy scavenger assassins, in particular, have a tendency to throw marks on the ground seemingly randomly. Both enemies and allies also sometimes have weird movement where they walk back and forth for no reason. It’s particularly weird-looking when they do it by switching places with each other. These things by no means ruin fights, although enemies that don’t do anything are disappointing, but it feels unpolished and more annoying over time. 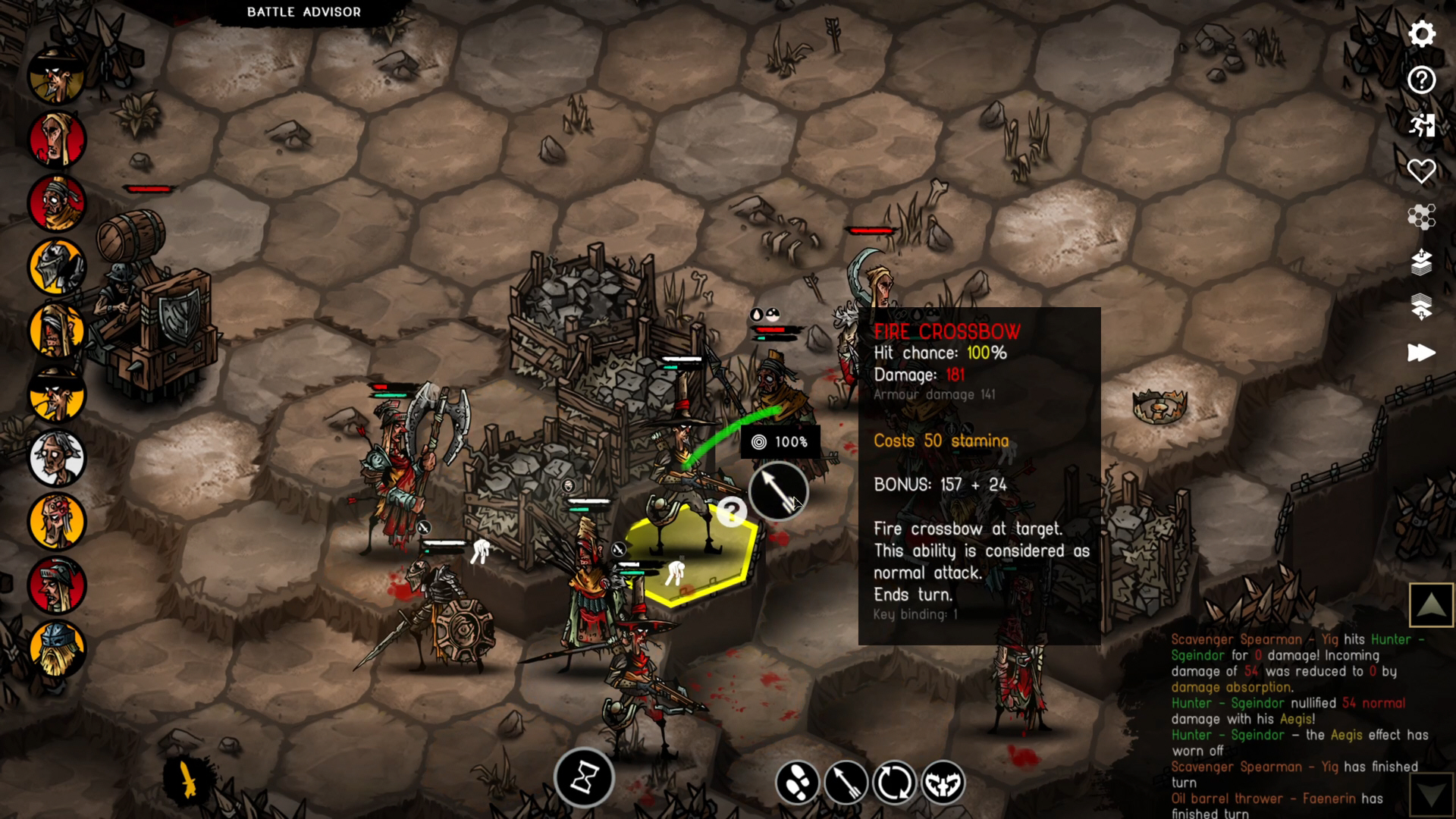 The interface has some curious design choices in my opinion. Even with “extended UI” turned off, the combat interface has a lot of popup information that flashes over the screen as the player mouses around, sometimes obscuring characters and making it hard to tell how much damage they’ll take for using certain skills. Conversely, the party management screen makes it hard to view all the player’s characters and items especially characters away on missions. But the screen to view a character’s traits is largely empty and requires mousing over traits individually to get any information other than a name. I imagine this changes over time as characters gain more traits/skills and player become able to recognize these by name alone, but I found it to make the game just a touch harder to learn. I also found it weird that all the character visual designs appear male or non-determinate, but maybe there’s a story reason for the lack of women that I just haven’t gotten to yet. 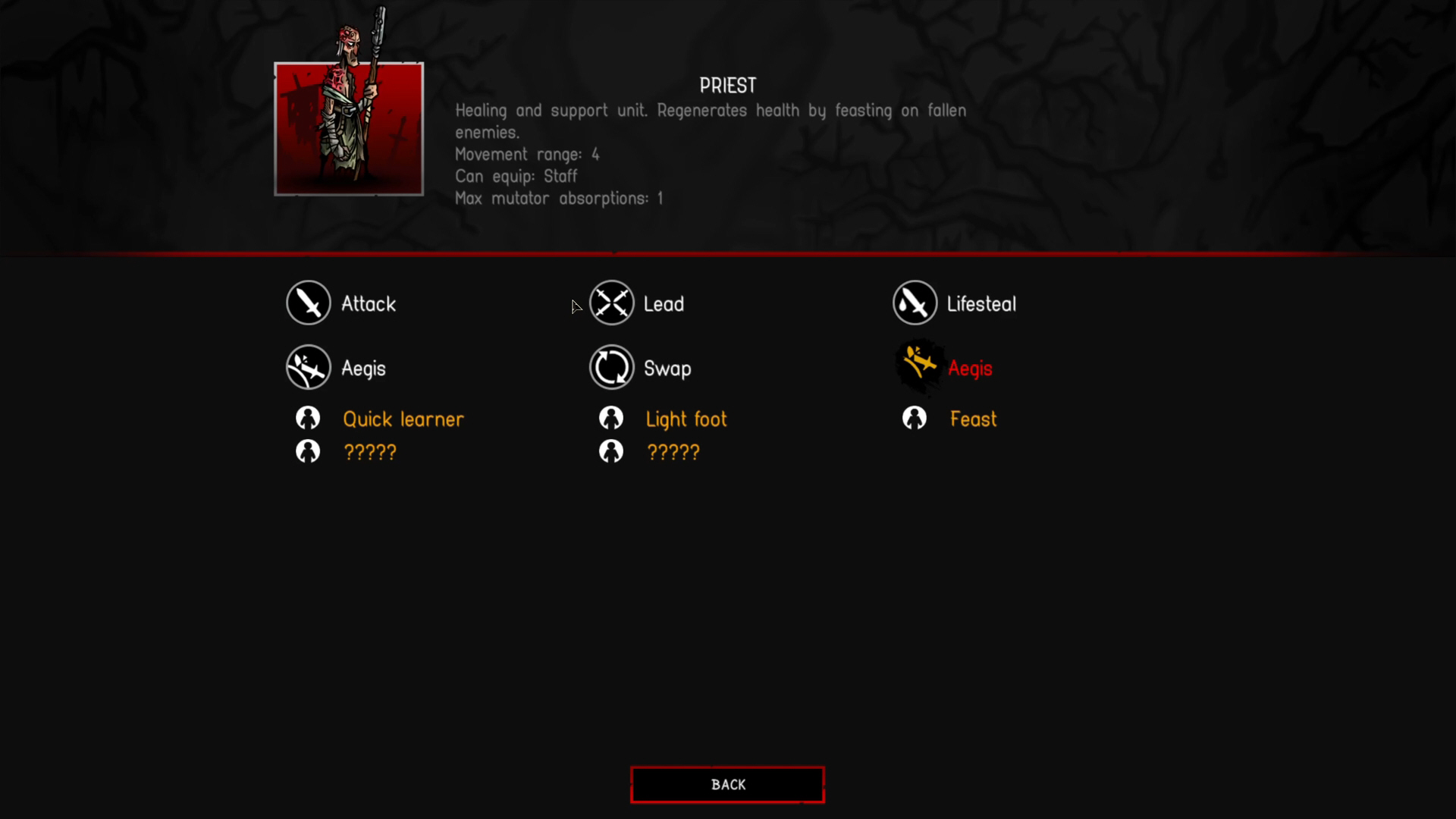 The largely unused screen for viewing skills and traits

Overall, I found Urtuk: The Desolation to be a complex and enjoyable tactical RPG. I loved the large variety of classes, traits, mutators, and enemies. Characters felt customizable, but also with some starting randomness to give them personality. I liked the tactical options for customizing the combat party, synergizing characters, and using terrain advantages. There’s also a lot of replay potential in the procedurally generated maps and resulting combat, event, and character variety. Not to mention the different starting options unlocked by progressing through the game. I recommend Urtuk: The Desolation for tactical RPG players looking for a complex game to sink a lot of time into.