Help a little girl escape the diary of the nine-tailed fox in Lynn, The Girl Drawn On Puzzles. 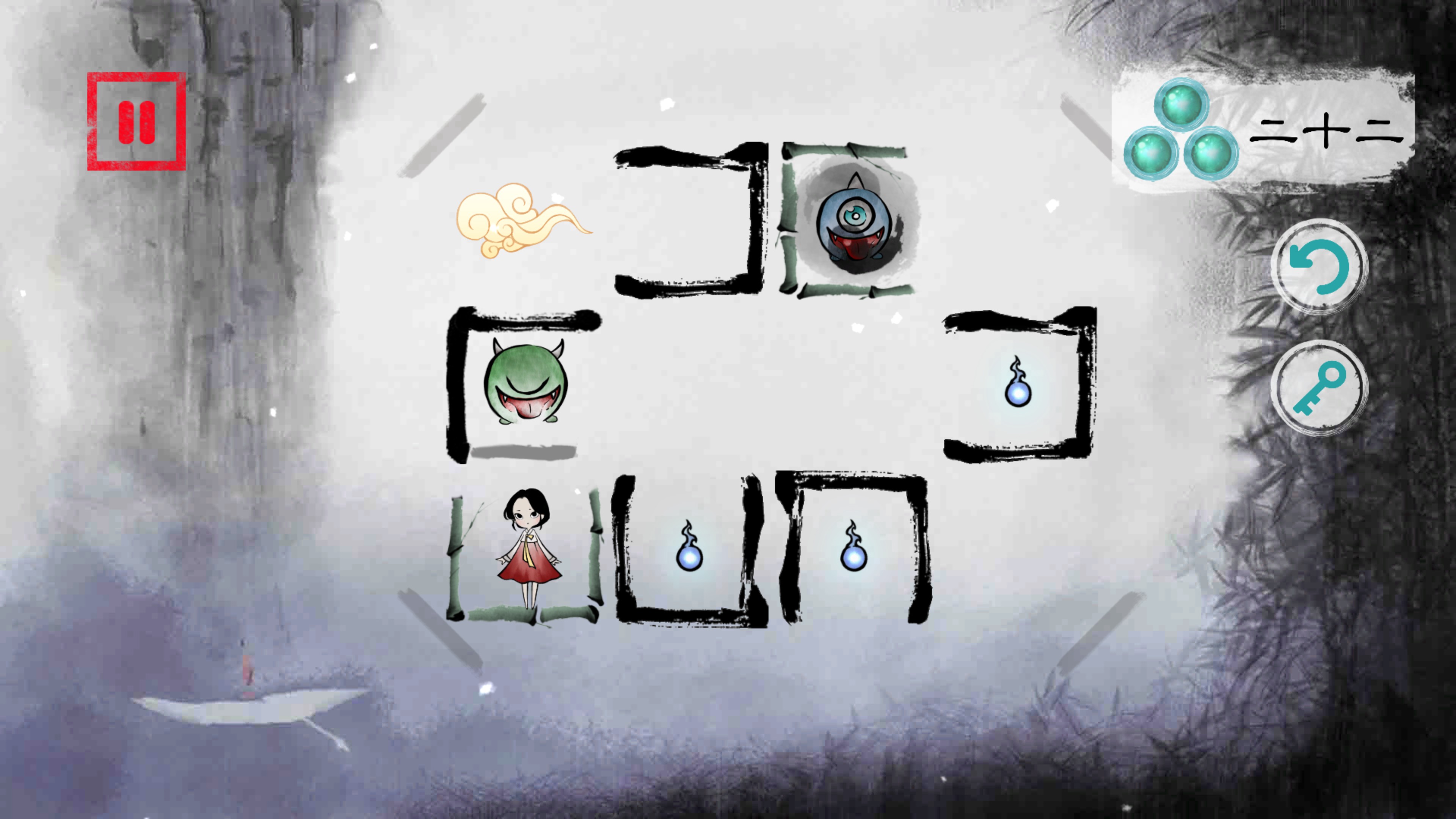 Lynn, The Girl Drawn On Puzzles is a puzzle game focused on sliding connectable pieces into new arrangements to allow Lynn to reach the exit. Along the way, there are hungry spirits to avoid, barriers to break, and walls to move. To get a three orb rating on each level, players must complete the level in the minimum number of moves. In addition to the main story, there are two side stories that unlock as the player progresses through the main storyline.

In my favorite side story, players play as a squirrel

As players move pieces around, Lynn and the spirits will move into new pieces following simple rules. Mostly this means moving into a new piece as soon as it’s connected to the current one, but some spirits require extra encouragement. Not all pieces are moveable and later in the game, some are limited to only particular types of movement. Each chapter of the story provides a set of levels in climbing difficulty that focus on a new mechanic, allowing for larger and more complex levels.

Cloud pieces take up space, but are moveable

The story of Lynn, The Girl Drawn On Puzzles focuses on a little girl named Lynn who travels to the mountain to get a legendary fox orb she believes will be able to cure her brother of smallpox. After accidentally discovering the diary of the Nine-Tailed Fox, she’s sucked into a world of pictures, all in a beautiful ink brush style. I found the art style very attractive, though I wish it had been a little higher resolution.

Lynn after getting sucked into the diary

As the difficulty of puzzles increases, the minimum move set also increases. As a player that constantly wants to discover the optimal solution, there were a few game mechanics I found annoying. First is that players cannot undo past any automatic movement of the characters (Lynn or spirits), meaning that it was often necessary to restart levels. The second was that levels we slow to restart, often trying to replay cutscenes on every restart. And third was that despite the game being localized to English, the move counter remained in Chinese, causing a barrier for non-Chinese speakers. The hint system was also interesting, providing static images of 2-3 game states necessary for achieve the optimal solution instead of giving hints about moves. I found this more enjoyable than more traditional hint systems, but it’s not for all players. 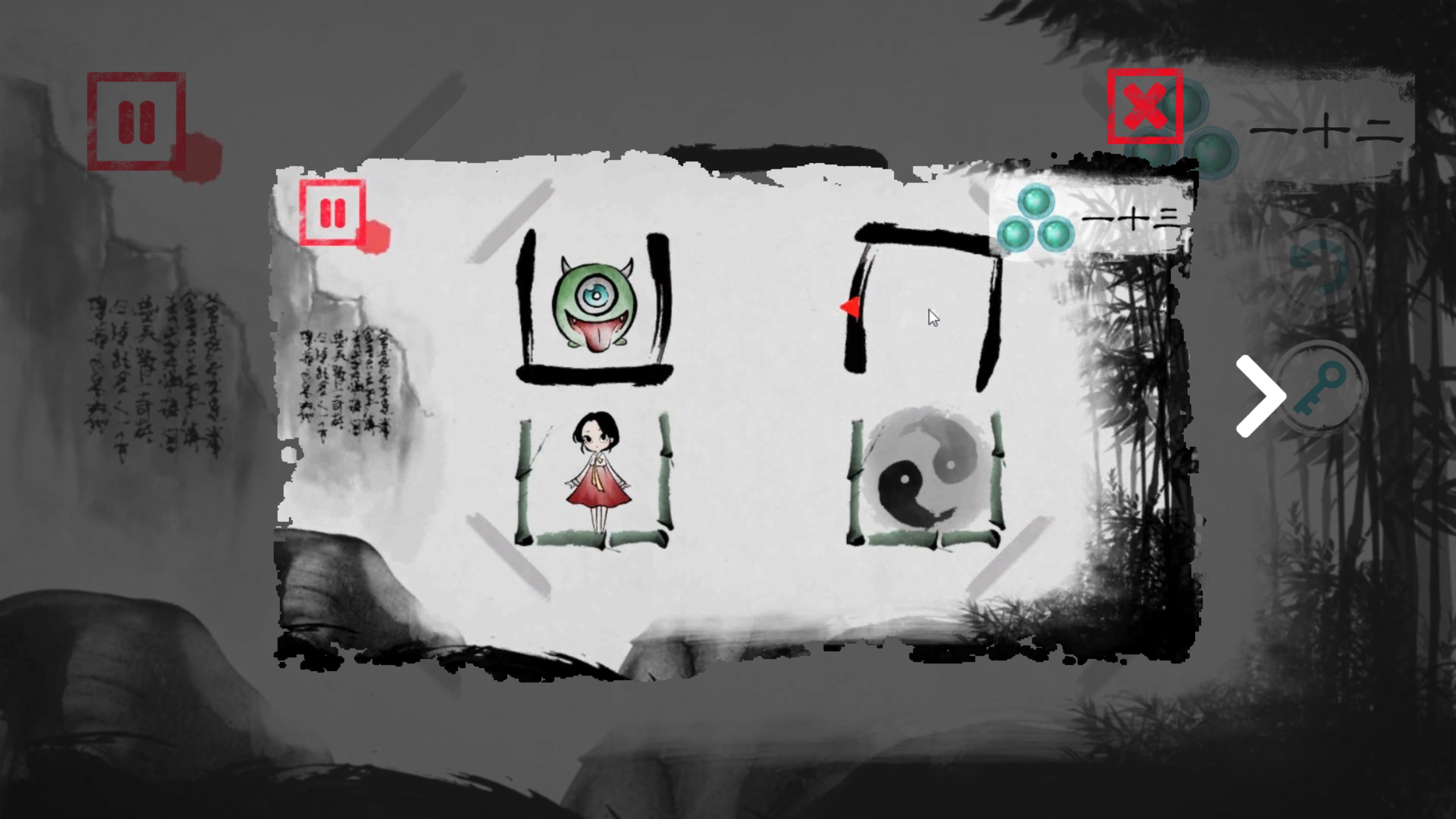 Example of a hint using a static image, the move counter is visible in the top right

Overall, I found Lynn, The Girl Drawn On Puzzles to be a nice puzzle game. It had lots of levels and continually introduced new mechanics. It also had a cute story and a nice ink brush visual style to tie into the narrative. However, I found going for optimal solutions frustrating because the move counter isn’t localized from the original Chinese, and undo isn’t allowed past automatic character movement which is common. It’s also slow to restart levels. I recommend Lynn, The Girl Drawn On Puzzles for players looking for a lengthy puzzle game that are less concerned with minor polish issues.