Delve into a crusade against demons in this tactical roguelite featuring shifting grids of enemies and items. Heretic’s Lot: Prologue is a completely free introduction to the mechanics of Heretic’s Lot. The main game is expected to release Q1 2021.

Heretic’s Lot: Prologue is a unique blend of roguelite, grid-based tactical, and turn-based puzzle. Players operate in a five by five grid populated with coins, health potions, shields, battle spells, and a variety of monsters. Some of these items may be obscured inside of crates. The player can pick up single-use battle spells for effects such as healing themselves, damaging enemies next to them, or teleporting to a new location on the board. As the player moves around the board, the square they leave will be taken up by shifting the current occupants of the board toward the player and then generating a new square on the outside edge of the board. 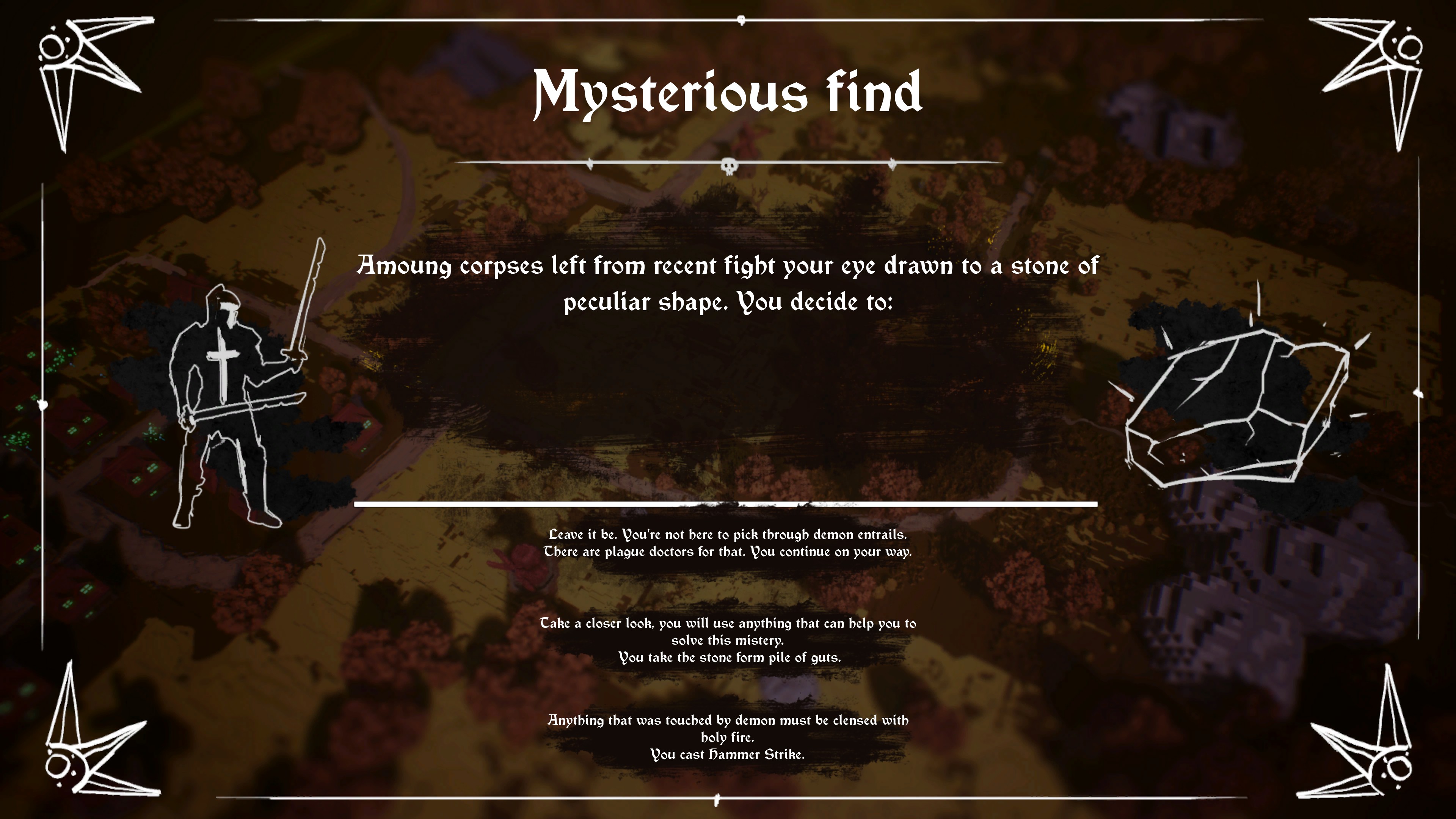 In each level, the player must survive a certain number of turns before a boss is summoned. In which case they must defeat the boss and exit the board through the top left. In order to survive, players must maintain their health either by building up shields or healing damaged with health potions. They will often be forced to fight monsters which can deal different amounts of damage to the player. They may also break open crates in order to reveal new monsters or items to use. If the player’s health ever reaches zero, the run is over and the player must start a fresh run. 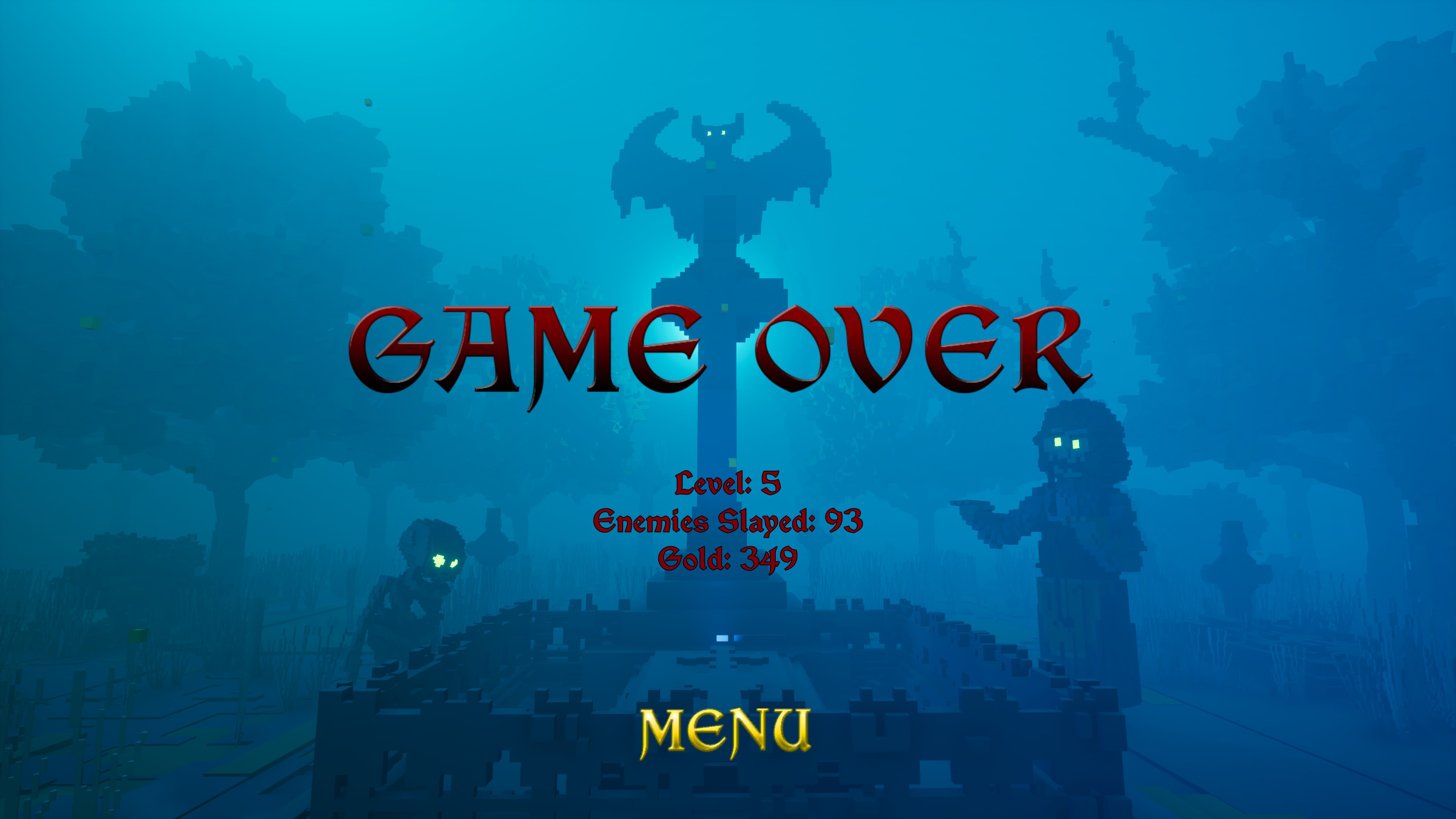 That unfortunate game over

Boards are randomly generated, as are perks offered after completion of each level. There are sometimes special challenge levels, which are completely optional but allow the player to get additional gold and perks. In this pre-game demo, only the first area is available. After completing the final boss of the area, the player will be directed to the page for the full game, which is expected to be released Q1 2021.

I really enjoyed the tactical aspects of the gameplay, especially as the player gains more perks, which benefit from attacking enemies in certain directions or affecting enemies with auras. This allowed me to plan routes around the board, such that I could keep my health up while clearing the maximum number of squares in order to reach the boss. The player has to balance defeating enemies with consuming health and shield resources and gathering gold. If a player grabs health potions, when they aren’t useful, they will be left with a very enemy heavy board and they won’t have the health resources to clear it.

Planning a path you can survive is key

Gaining gold is helpful between levels when one may have the option to buy single-use battles spells from a merchant, but within the scope of a level, gold has no intrinsic benefit. The player also has a limited inventory in which they can only carry five single-use spells. So if further options are available on the board, they need to make sure to either use up one of their existing spells before picking up the new one or be ready to discard one.

Using a spell to clear 4 enemies in a challenge level

Many of the bosses have starting health greater than that of the player. The player must either find a way to whittle down the boss before going in for a kill, use positioning to their advantage, or build up a sufficient quantity of shields. Some bosses also have unique mechanics such as ranged attacks or auras, which may benefit the boss or the enemies around them, or simply be detrimental to the player.

Bosses are denoted by unique models and a red circle underneath

Perks are obtained between levels. There are several perks that I found very enjoyable. I definitely liked the backstab perk, which has multiple tiers that grant bonuses for attacking enemies from behind. I felt that this allowed me to focus a lot on planning routes around the board, such as to get all of the enemies in a column or row facing a single direction and then clear them all at once. This coupled well with a perk which granted a shield bonuses for killing multiple enemies in sequence. After beating the prologue, once there wasn’t a lot of additional gameplay in terms of new perk combinations. I look forward to further expansion in the main game.

Full heal or permanent perk offered after a level

Some of the mechanics of the game were not fully explained. For instance, in the user interface, it’s not clear that the second value represents shields and what the use of gold is. It’s also not clear that there’s a limit to five spells in your inventory. More frustrating for me was that the player cannot view what perks they have during a level, only between levels. Other mechanics, such as the fact a player can only have a single aura perk are not explicitly called out. The player has to stumble into figuring this out themselves. 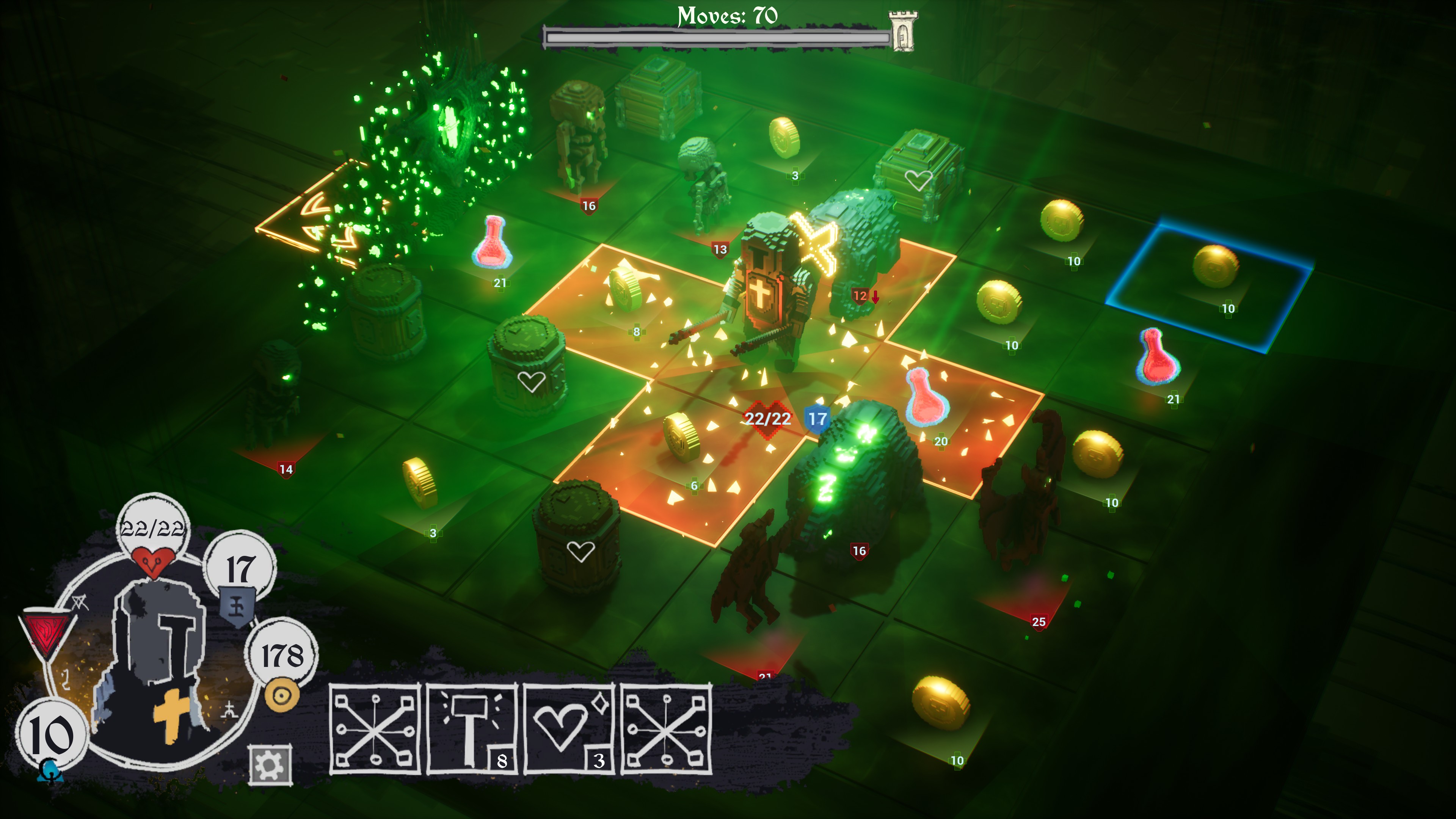 Using a burning aura hurts enemies as well as items

There was a reasonable number of single-use spells in the game and they each had their own scaling. However, I didn’t find them useful enough to warrant gathering large quantities of gold, especially since in order to spend gold, the player had to give up choosing a perk at the end of a level, and instead choose to visit the merchant if that was offered. Since the spells didn’t really warrant this tradeoff, I felt that the gold didn’t have a strong purpose in the game. I’m curious to see how the spells and other uses for gold are flushed out in the main game.

I liked the graphics of Heretic’s Lot: Prologue. I felt there was a great balance of dark but not obscuring colors, lighting, and other effects. My one ask here would be for more animations in the final game, but I assume at this point in development, that is not one the developer’s priorities.

Overall, I’m pretty excited to see how Heretic’s Lot turns out in the main game. I really enjoyed the tactical aspects of the roguelite. It introduced a lot of puzzle mechanics into the strategy roguelite genre and I can definitely see where there’s a lot of room to really flesh out the perks and spells to increase the replayability. I recommend Heretic’s Lot: Prologue for any players interested in the main game or tactical roguelites in general. It’s certainly a good teaser for what Golden Cup Games have in store for us and I look forward to seeing more in the future.

What upcoming roguelites are you excited for?
Let me know in the comments below!