Looking for a simple relaxing puzzle game? Sudoku Quest offers an endless stream of Sudoku puzzles in three board variants. Players are challenged to complete as many levels as possible before they make a total of 10 mistakes. Levels are randomly generated for infinite replay-ability.

Remaining hearts are not reset between levels

Sudoku Quest is an endless Sudoku game in which players play in adventure mode, completing a number of puzzles in a row until they get 10 mistakes. There are a number of different power-ups that players can activate by collecting coins from making progress and solving puzzles. These power-ups can do everything from giving the player the answer to a cell, helping to pencil in numbers, or letting the player guess and check a cell. The biggest benefit of Sudoku Quest is the fact that players can endlessly play Sudoku. The main adventure mode randomly generates levels every time it’s played. So players can easily play over and over without exhausting a library of levels. Players can also design custom level generation by affecting board type, difficulty, allowed mistakes, and gold for power-ups.

Puzzles are scored after completion

Unfortunately, due to this random generation, sometimes levels have multiple solutions. This can be particularly frustrating because certain power-ups will fail to activate correctly if used when on a cell in which two answers are possible. Often the player can figure out that this is the situation they’re in and both solutions will be accepted, but it can be particularly frustrating and players may lose one or two of your 10 hearts (lost when making mistakes) in attempting to figure out what to do at this point.

Another thing I really liked about the game was that there were three different board styles. There’s the classic Sudoku, a variant in which multiple classic Sudoku boards were overlapped on top of each other, and a nonomino Sudoku variant in which the typical division into nine block squares was replaced by irregularly shaped colored blocks. These provided a lot of variety, although I found the variants to be harder than the classic versions presented at the same challenge level in the adventure.

For my first couple of playthroughs of the game, I didn’t use any of the power-ups. This was partly because I couldn’t remember what they did. The power-ups are only explained from the main menu help section. When players enter the game they can’t hover over them to remember what they do. Once I got more used to what they did, I started using them. I particularly found the option to pencil in a small section of the board for a very cheap coin cost to be particularly useful. They saved me a lot of time and a lot of misclicks accidentally thinking that I’m penciling something and then losing heart, but the use of such power-ups may detract from the challenge for some players. This also makes it a lot easier to notice when a puzzle is in the state in which multiple solutions are possible.

Some of the power-ups

The last thing I had an issue with was the sound effects in the game. I tried to play with them on for the first hour or so, but I found that mostly sounded like my speakers were popping instead of actually making sound effects and that static effect didn’t sit well with me. I enjoyed other aspects of the game’s atmosphere, such as the color palette. I thought it was really nice that it had a non-pure white board and background and this made it much easier to stare at for long periods of time. 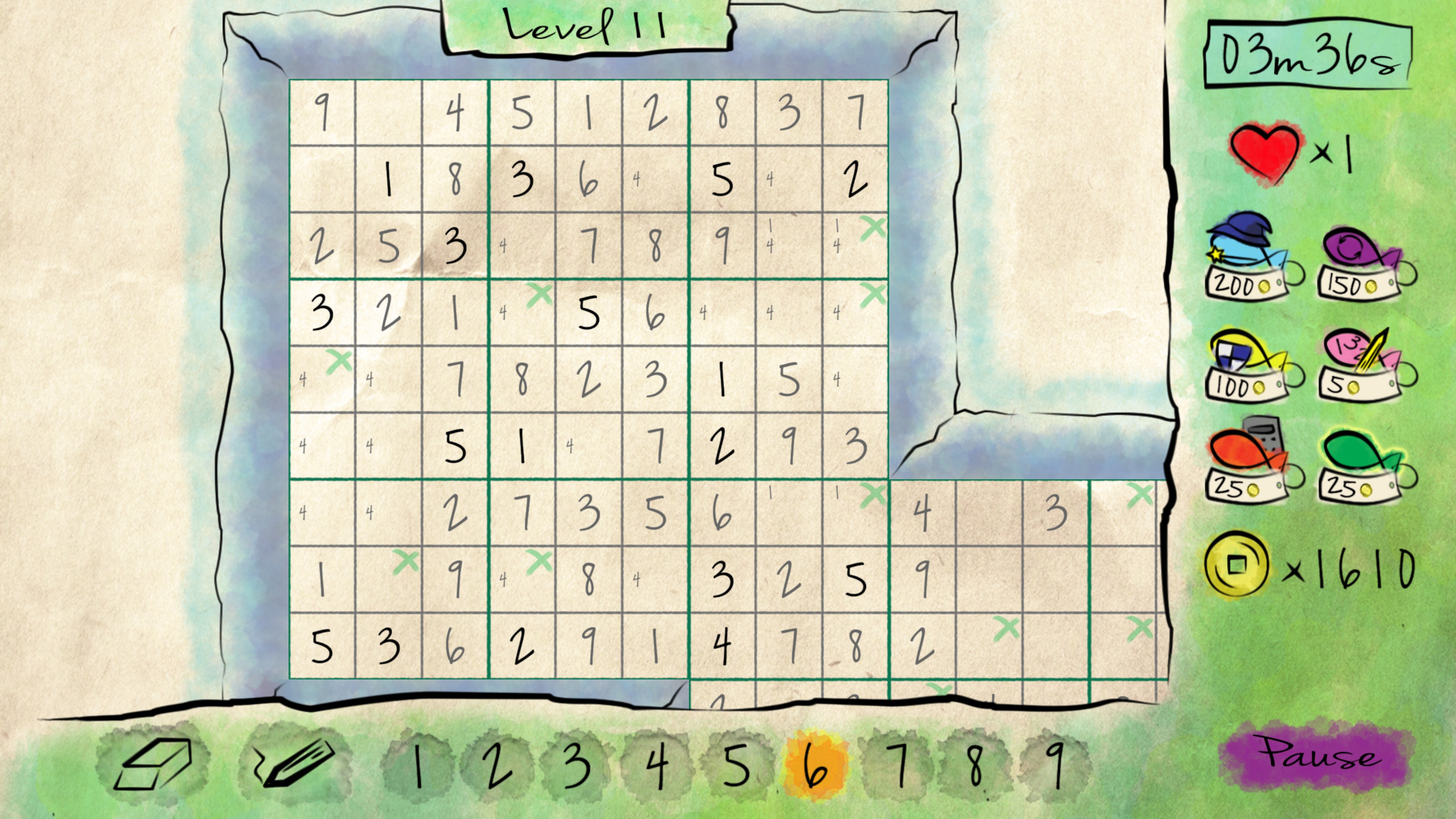 The overlapping variant can be panned but not zoomed

Overall, I enjoyed the endless puzzles of Sudoku Quest. I liked the variety of puzzles, helpfulness of the power-ups, and the easy viewing of the color palette. However, I struggled with the sound effects, remembering the power-up effects, and the possibility of multiple solutions to puzzles. I did not experience it myself, but other users have reported crashes with certain software drivers. I recommend Sudoku Quest to players looking for a simple endless Sudoku game that are willing to forgive it the multiple solutions and do a little investigation into software compatibility.