Cadria Item Shop is a free-to-play casual simulation game with idle elements. You play as a fantasy shopkeeper with your friend Fina (who’s been turned into a cat) after a witch destroyed your town. Craft and sell items, employ and train artisans, equip and send out adventurers to retrieve rare components, and invest your money in a variety of buildings around the town. There’s also a guild and chat system for cooperative play missions. 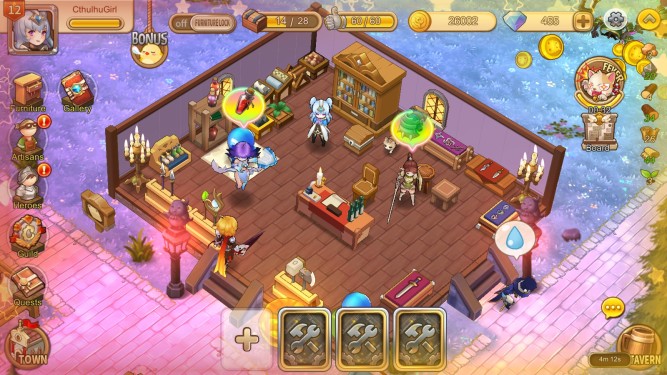 Customers come looking for specific items, but later you can also suggest alternatives to them if they like you. 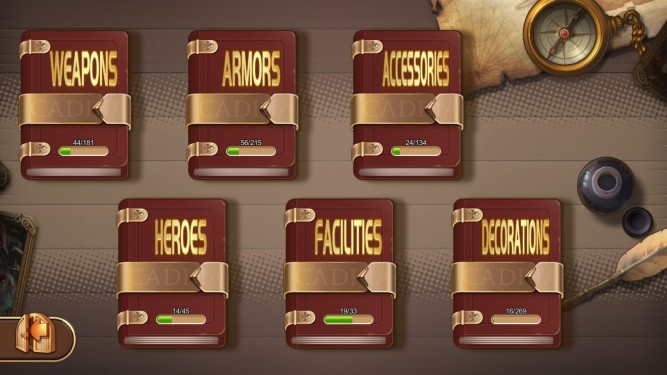 Catalogs listing the many items, heroes, and furniture you can collect.

The main mechanic of Cadria Item Shop is crafting items. Each crafted item requires a blueprint, resources, a crafting slot, and time. Crafting an item gives experience to the artisans involved, improves the blueprint (up to a cap), and has a random chance to produce the item at a higher quality. Items can be sold to visitors to your shop or equipped on to hired heroes, and at higher shopkeeper levels they can be sold in bulk to other shops, organizations, or factions which each offer their own rewards in exchange for a lower sell price. More powerful heroes can go on harder adventures, bringing back rarer components or contributing more to guild or story combat events. 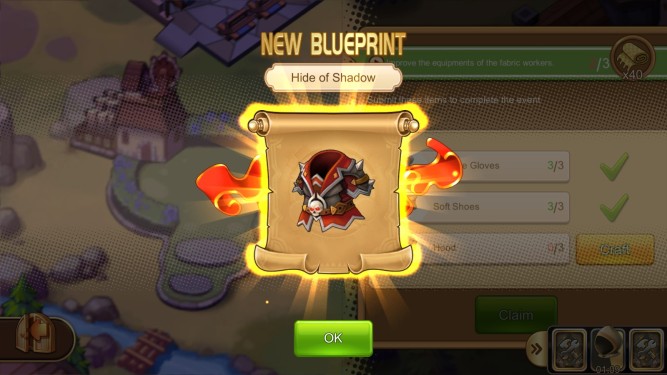 Money can be used for a huge number of things. In the shop, money can buy and upgrade decorations and display shelves which give bonuses to your artisan’s likelihood to craft rare items and how much your customers are willing to spent. The shop can also be expanded, new artisans and heroes hired, and artisan work areas upgraded. In town money can be invested in buildings to increase resource gain, max hero and artisan level, and unlock new buildings and building features. Money can also be invested in the bank to gain interest or spent on new adventure and crafting slots as your shopkeeper level permits. I loved all the different options to choose from and how each of them felt beneficial.

The story also functions as an extended tutorial and guides the player through the many investment options.

My biggest problem with Cadria Item Shop was the genre shift. Prior to about the 10-11 hour mark, the gameplay felt mostly like a tycoon game with lots of investment options and a steady flow of income. However at around the 10-11 hours of gameplay point, the timers to craft things or gather resources become so long that the gameplay shifted to be more akin to an idle game. Previously timers were short enough that you could cycle through them and things would be ready when you got back. Unfortunately after the shift to a more idle style of gameplay, the game could no longer hold my attention on its own. My playtime inflated far beyond what I was actually getting out of it, because I’d leave it on while doing something else and only tend to it for about 30 seconds when it chimed at me. I’m not a fan of games which change genres permanently, although I recognize that this tends to be the pattern of games focused around timers. However many games of that nature have investment options for reducing timers so that the player can keep them low if they so choose. My impression is that this option was not provided because Cadria Item Shop uses a premium currency model to fund itself. 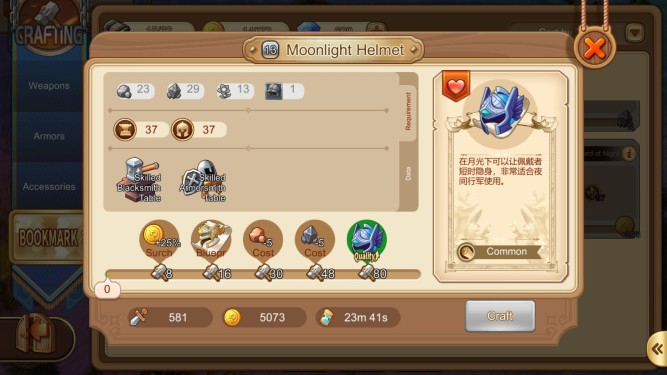 This item I unlocked toward the end of my current play time takes almost 24 minutes to craft after my artisan bonuses.

The premium currency in Cadria Item Shop is Gems which can be acquired slowly through the story or bought directly via real money. (There are no ads which mobile players may be accustomed to as another way to acquire premium currency.) Premium currency can be used to instantly finish any timer, purchase cosmetics, acquire premium decor (does have a gameplay affect), reroll daily quests, and make up for missing money or resources in crafting, investing, or upgrading. It can also be used for repeatedly changing your name or resetting artisan skill points. Some players will be turned off by the Premium currency model so I’ve listed it as a Con, but I personally find that free-to-play games allow a wider audience of players. Given that the closest thing Cadria Item Shop has to PvP is global leaderboards I’m not really affected if other players dump a bunch of money into the game and get fancier stuff than me.

Cadria Item Shop was produced primarily in Chinese. The vast majority of the interface and all of the story (that I’ve seen so far) has been localized to English. There are minor translation errors and some of the text that hasn’t been localized is things encountered later in the game like flavor text on higher level items, but some of it you run into randomly early on. So far I’ve been able to make do with not being able to read it. The bigger barrier is that the player base is primarily Chinese speaking. There is a separate chat channel for English, but there are significantly fewer players in it and it’s also used by Russian speakers or just anyone not using Chinese. I was able to find a guild with an English description, but all the members seem to be Chinese speaking. Talking isn’t necessary for guilds to work together, but social players will prefer it and your guild leader will be in charge of setting the daily commision time. Make sure it’s something that works for your time zone and schedule.

Without knowing any Chinese, I think I still understand what it’s telling me.

Overall I found Cadria Item Shop to be a good free-to-play game with a lot of gameplay to it. I found the transition to an idle style unappealing, but it has continued to be worth my play time. There’s tons of ways to grow your shop and many items, heroes, and artisans to work with. I enjoyed the many fronts to expand on and all the different investing options. Players may be bothered by the Premium Currency model, and non-Chinese speaking players may experience frustration if they want to partake in the social aspect of the game. But fans of the genre will likely enjoy this free-to-play option.

Find this game on Steam.