The Devil Haunts Me is a completely FREE action survival game. Players start out with an axe, gun, and bucket for getting wood, meat, and water respectively. Each day allows only a set amount of energy and requires some of each resource. Players go from scraping by with daily survival to fighting the final boss in one sitting.

This skinned deer corpse sets the mood for the game

Day 12: I awaken wearing the skin of a fox. No food. No water. Just the buzz of the thing outside… hunting me. 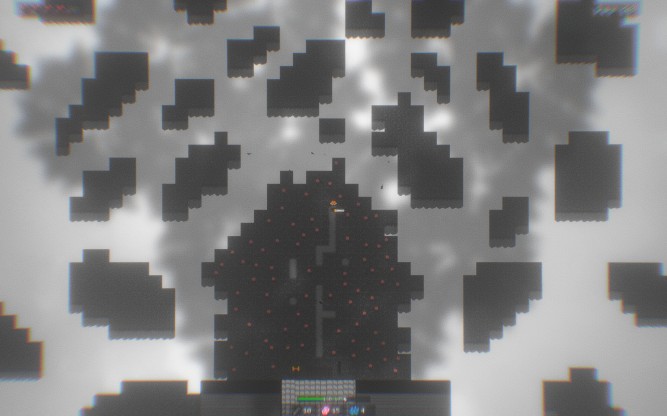 The boss fight here initially won’t spawn for me

Daily survival in The Devil Haunts Me starts out with gathering enough resources to survive each day with the limited starting energy pool. Players can’t travel far and spooking away a deer can be costly. As players explore further, small energy upgrades become available and bridges are discovered which can be repaired to gain access to new areas. Repairing bridges costs resources though, so players feel the struggle of survival. By late game, daily survival from resources is no longer a worry. “The Devil” as one might call it, is a bigger threat. It hunts the player and grows in power to match them.

All three of the starting items (gun, axe, bucket) have several upgrades which are found through exploring. Players can also gain additional health and a sword for fighting The Devil. Only one item can be carried at a time so players need to plan how they’ll travel around. Exploring new areas gives access to improved resources and new outposts from which to pick up equipment. I enjoyed exploring the whole map and finding some of the more hidden areas.

A basic gun, axe, and bucket are available at the start of the game

There are two endings to the game (three if you count dying horribly), based on which final boss the player kills. After killing one, the save game can be loaded up to kill the other. I got all the upgrades (except one energy boost) before fighting either, but the fight seems doable without all of them.

I enjoyed the art and color scheme of The Devil Haunts Me. It’s not particularly fancy, but its effective in communicating the mood and drawing the player’s eye to important objects and creatures. The sound effects were also fitting and gave the player good warning when The Devil was coming around.

I had two issues with The Devil Haunts Me. First was that toward the end of the game it took forever to get anywhere. I wish there had been a movement enhancing item like boots or something. Second was that I encountered at least two bugs which required me to restart the game to progress. The developer has been very responsive on the forums about these issues. I cut it some slack since it’s easy enough to fix and, hell, the game is free anyway.

Overall I recommend The Devil Haunts Me for any players looking for an action survival game. Given the depth I’m surprised this game is free. The survival aspect and progression across the game are well balanced. I enjoyed going from struggling to feed myself to capable of defeating the final bosses in one sitting.

Find this game on Steam.