Way to Go! is a puzzle game in which the player lays out commands for characters to follow while trying to reach an exit. Commands include turning, moving or destroying objects, and swapping active characters. Commands are limited so it’s necessary to plan out object locations and sometimes pause the character’s movement to place a command on a newly vacant square. Playing through Adventure mode follows the story and unlocks additional levels in four additional modes which can be played in any order. 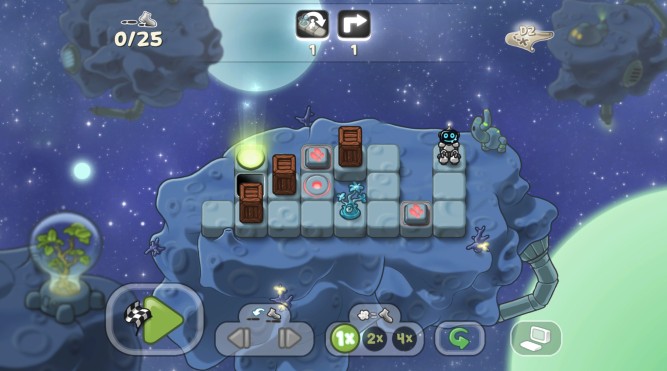 Adventure mode follows Rob, Egg, and Liz, each with their own abilities

Way to Go! Features over 400 levels split across adventure mode and four additional modes which unlock as the player progresses through the story. The vast number of levels allows for lots of play time, especially if players want to shoot for the minimum number of squares moved on each level. Adventure mode levels follow the story and focus on each of the three featured characters advancing to the goal marker. Automatic movement is key in the game, the player may have to direct a character to move a box such that they automatically turn around a corner the player wouldn’t otherwise have the ability to command them around. In other cases the player may need to make it impossible for the character to access parts of the level again, in order to avoid getting them trapped or falling into a hole.

Coin Hunt: additional game mode where characters must pass over every square to win

Unfortunately I found the basic mechanic of sporadically commanding characters while they followed their default movement, lost its appeal over time. Toward the end of the adventure mode, I didn’t feel intrigued or motivated to struggle through the highest difficulty puzzles. Despite adding new commands or mechanics, the game tapered off in new gameplay towards the end. Later levels were longer and used multiple characters, but this didn’t feel like a difference in gameplay, it just made the levels harder. Level difficulty, particularly in adventure mode, had a huge spread. Difficulty wasn’t random, which was good, and increased fairly smoothly. But I found that early levels could be completed in 30 seconds, while late game puzzles could take more than an hour. I didn’t feel that this spread of difficulty targeted players well. A player that wants a complex challenging puzzle experience, may get bored rolling through the first half of the game, while a player that wants more of a quick fun puzzle experience will likely be frustrated by later levels or skip the end of the game entirely. Either way, the advertised number of levels is somewhat wasted.

There were also some game interface hassles. When a player reaches the levels they find challenging, they will find themselves resetting the level rather frequently. This can be done in two ways, either by completely resetting the level or by undoing back to the point where they want to make a change. I found both of these methods had their own inconveniences. Undoing required clicking backward through every square the character(s) traveled, which in later levels was a lot of clicks. I’d have preferred to be able to hold the button down or have a timestep slider to quickly rewind to the point I wanted to edit. I used undo as my primary way of “resetting” however, because doing a complete reset was usually more than I wanted and doing so also reset the character move speed. There were 3 tiers of movement speed for the characters to use which allowed the player to progress faster through the level if they didn’t want to make edits while the characters were moving. However I found I always wanted the fastest speed because even if the character passed where I wanted them to go, it was faster to pause and undo a couple steps than to watch the character crawl through the level. I would’ve preferred resetting the level did not clear the move speed preference or have a way to set a default in the options menu.

Overall I found the game to be solid with different level types and abilities for each character. The difficulty curve will probably miss some players at one end or another, but it’s smooth and the mechanics are straight forward. I recommend Way to Go! for players that are excited by the premise and looking to put in a good chunk of hours, especially if they’re interested in trying to get perfect on every level.