Collect and breed koi fish in more than a dozen colors and with procedurally generated patterns to create your own most beautiful koi in Koi Farm!

Midgame, during my quest for the pink koi

Koi Farm focuses on the selective breeding of koi fish to achieve new colors and patterns. Players acquire their first koi from the stream and can place them alone in either of their two ponds to allow them to breed. There are no genders assigned to the fish, and fish do not need to be fed or otherwise cared for to survive indefinitely. Depending on the pairing of fish, new mutations of colors and patterns can emerge. Players will be directed to seek out certain colors and patterns by their catalog book and any discovered fish can be shared with other users via image codes.

See some of the simpler procedurally generated spotted patterns

There are more than a dozen colors and five base patterns. I specific “base” patterns because all patterns are procedurally generated meaning even if two fish have the “spotted” pattern, they are unlikely to look the same. Some patterns can also be layered on top of each other resulting in tricolored koi for even more variability. All patterns are available to all colors provided enough persistence to get the mutations to occur. I would however have preferred if the cards for each fish gave a name for the pattern and color so there was less comparing back and forth, particularly for light/dark blue and grey/black, as well as some spotted patterns that easily looked like stripes. This would have been more valuable to me than the fish’s size.

As a collector-type player, my instant desire was to collect one koi of every color and base pattern combination in the game. Nevermind that that’s over one thousand fish for the two-color koi alone, the goal of the game for me would very much be tracking and completing such a collection. Unfortunately, the in-game catalog doesn’t allow for tracking how many of the possible variants have been found, let alone provided enough space for players to store all such fish for their own tracking purposes. This was a big letdown for me as I’d have loved to have a tab for every base color to fill up with all my beautiful koi. Instead, my large pond became very crowded and it was hard to find fish I needed so I stopped playing once I unlocked all the pages in the catalog that I could. 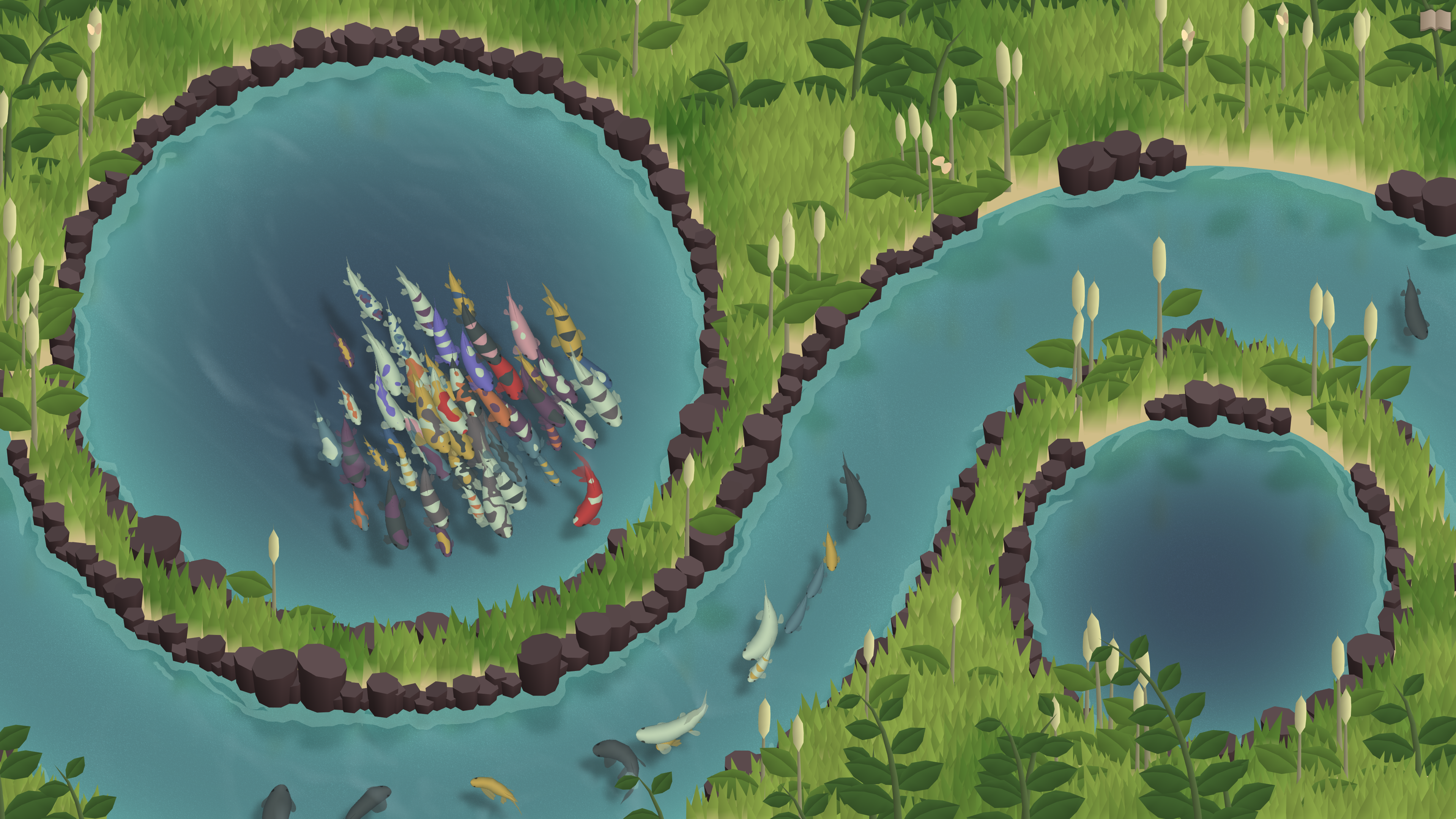 My current army of koi with no slot in the book

Koi Farm has a very relaxing and low-pressure atmosphere. There’s no reason to rush in anything and even the wild koi take a long time to lazily pass by. The atmosphere is pleasing with occasional weather changes and the koi fish changing up their slow schooling around their pond. Yet at the same time, an active player hardly has to wait for fish to grow up or breed, bringing progression at a good pace. Granted, the player will still need some patience with the random outcome of breeding, but rarer random outcomes seem to become more common as the same two fish are continually paired.

Overall, I found Koi Farm to be a very relaxing and casual collecting game. I loved all the varieties of koi fish and the procedural patterns to give each fish a unique look. They also require no maintenance making the game very relaxing and letting players focus on their collecting. However, I wish it was possible to track all the combinations of base patterns and colors in the game and that these were more readily displayed in text. I recommend Koi Farm for players looking for a relaxing koi collecting experience with some beautiful fish.