Construct your own religion and lead your followers to defeat false gods in Godhood! 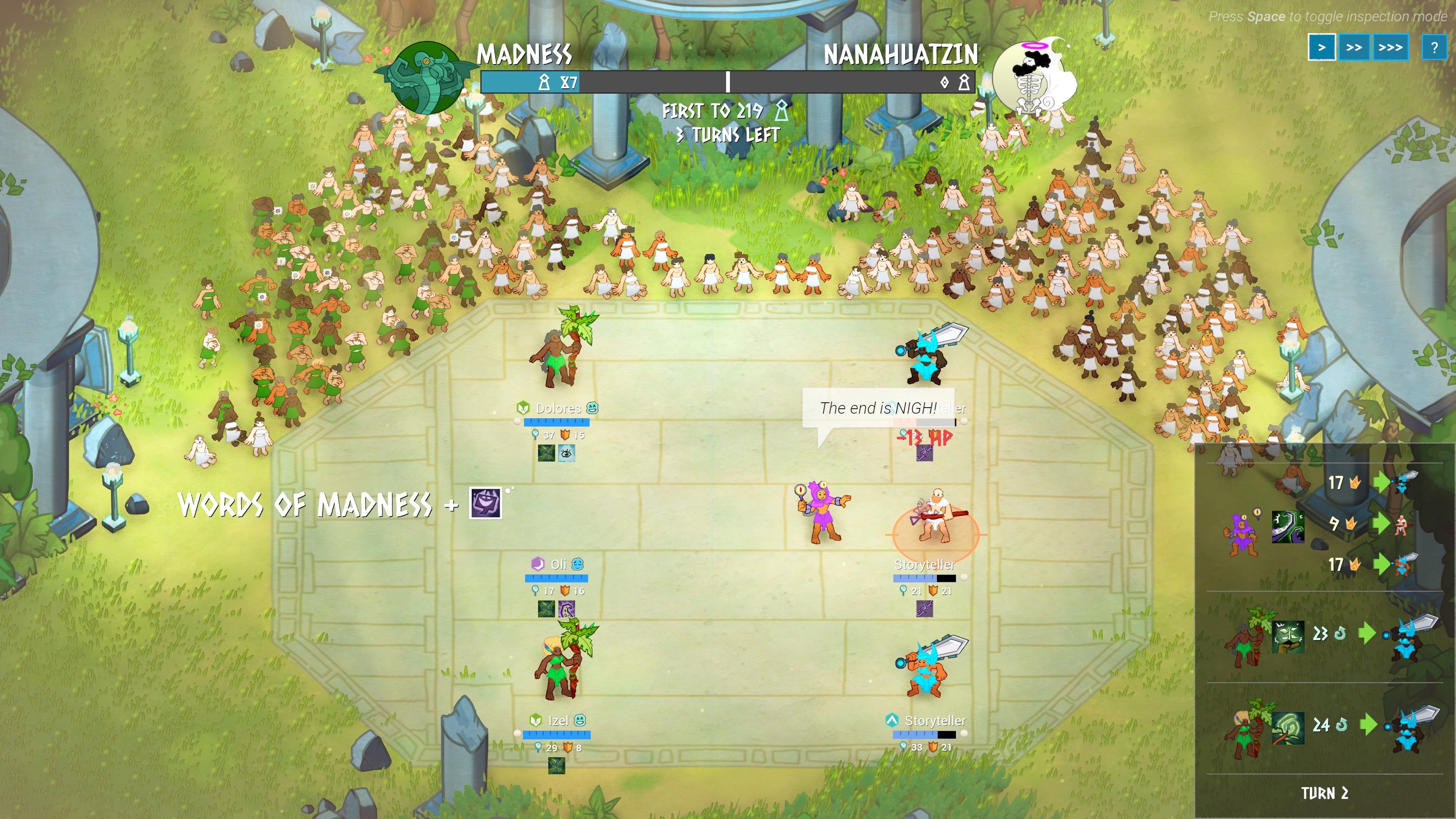 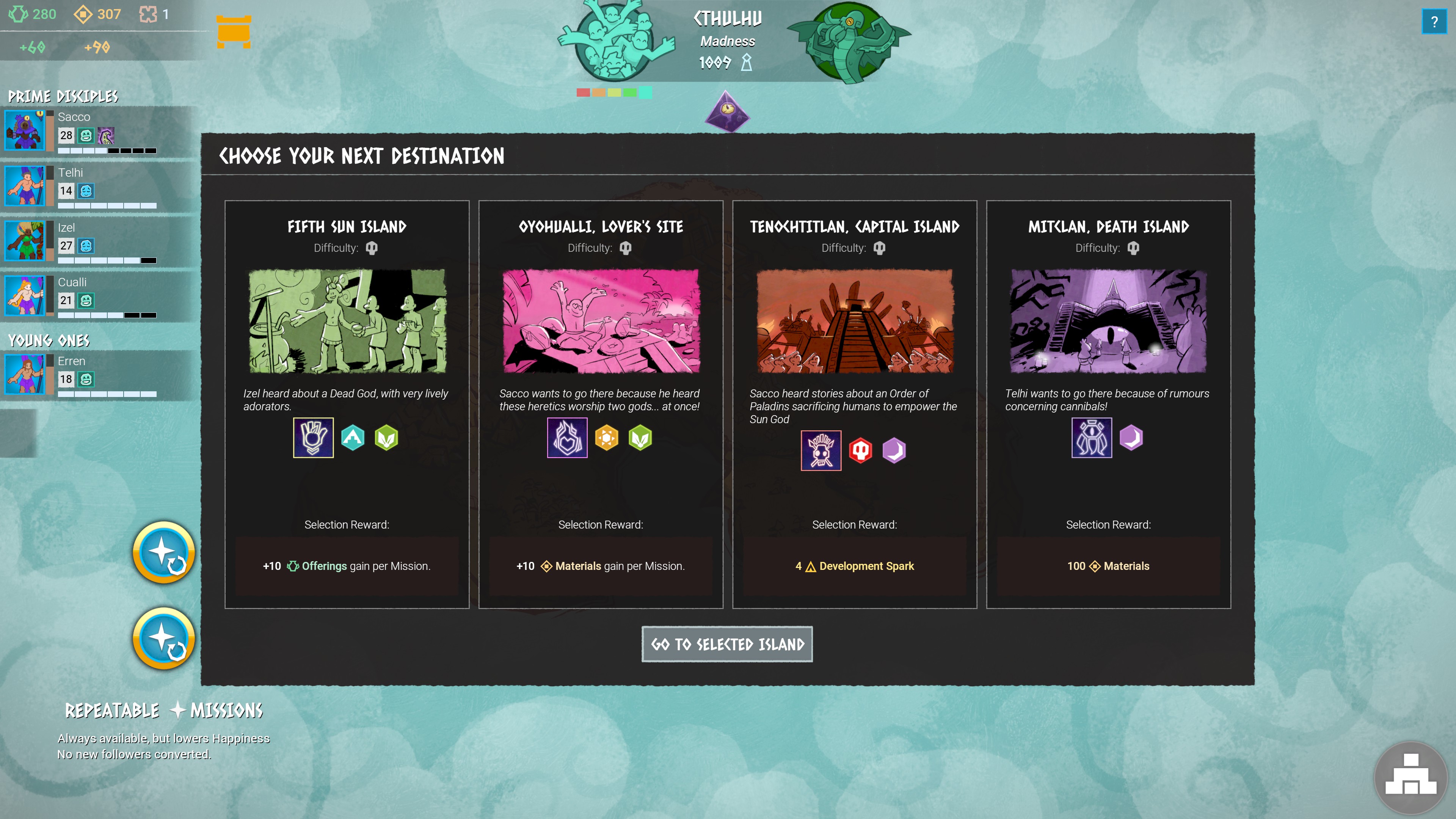 Godhood is a simulation strategy game focused on gaining a religious following and defeating followers of other gods through physical and moral combat. Players have a semi-indirect role in leading their following. While they don’t actively participate in combat, players will choose their fighters and combat formation, as well as a variety of buffs and advancements paths for their disciples. Investing in the future is also important, as disciples will be around for a while, and players are limited in their recruiting. 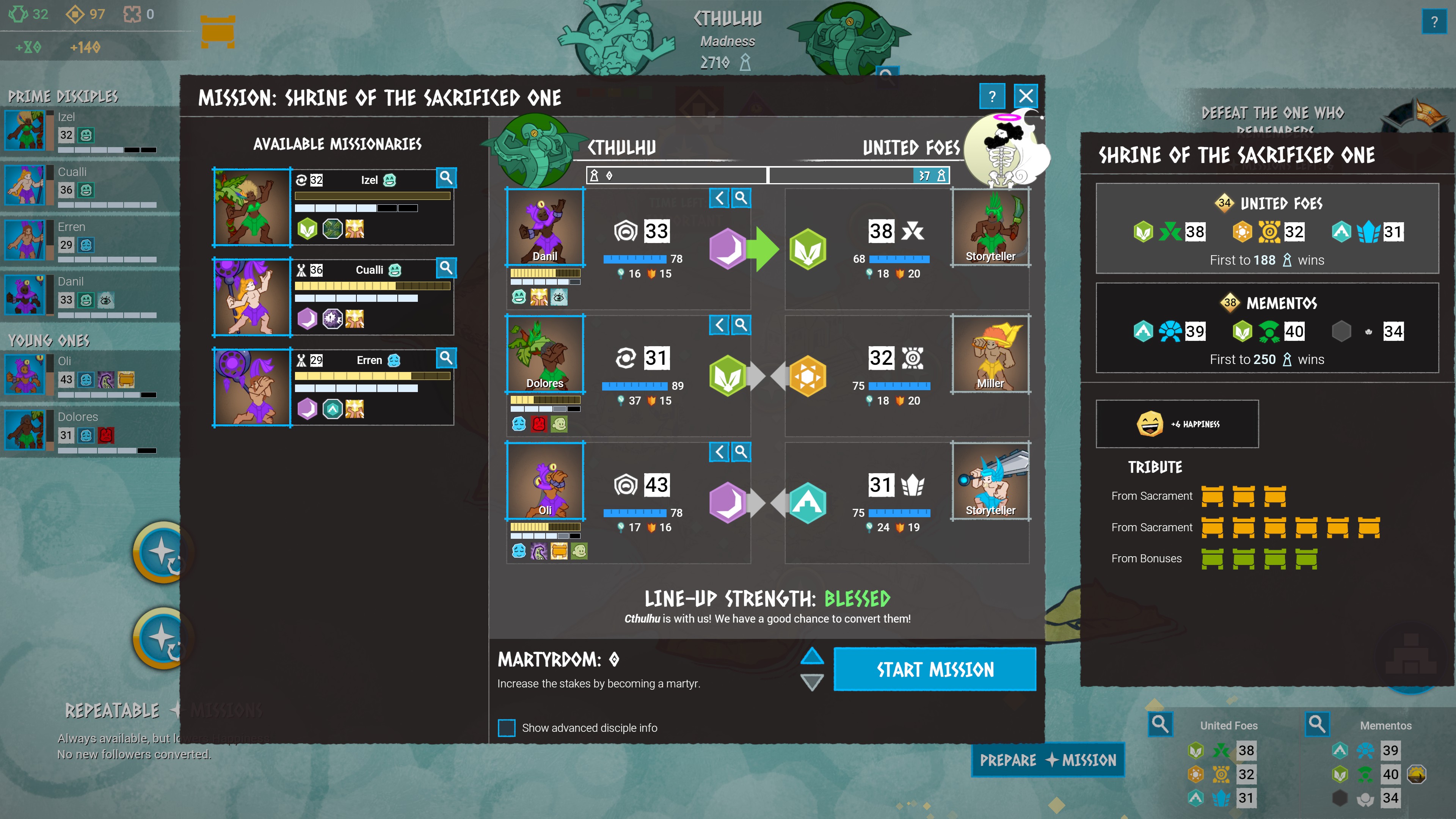 Combat is done 3 vs. 3 to a maximum of 4 turns. There are two possible win conditions, convert the crowd to the player’s side (favored by moral abilities) or defeat all opponents (favored by physical abilities). Disciples typically enter combat with 5 abilities in their “mind”. Each turn they will randomly use one of these abilities, typically targeting the opponent opposite them but increasingly targeting the weakest opponent as they grow stronger. The opponents will do the same, and strong defensive units on either side may also intervene to protect the targetted ally. Opponents’ stats, passives, and abilities are fully visible before combat. 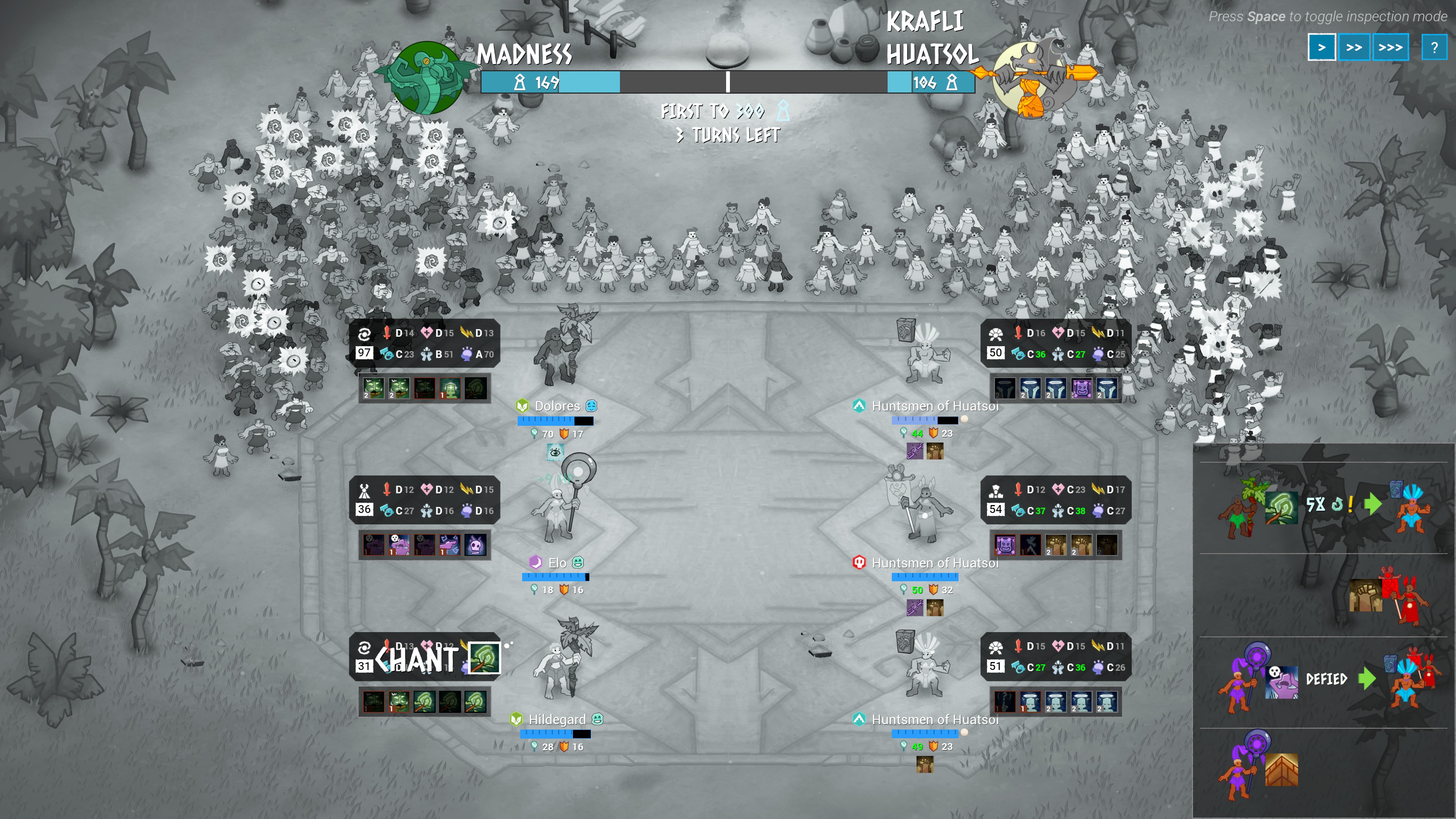 Between combats, players have 3 turns to power up their disciples and build infrastructure using resources gained from said combats (and minorly from random events). Disciples slowly gain chosen stats over time, which can be increased by building certain buildings. Other buildings might increase resource gain or unlock god abilities that can grant a larger boost to a single disciple. Disciples can also level up after combat and then sit out for a combat to upgrade an ability in their “mind” and gain a permanent bonus to stat gains or their faith (affects passive abilities). 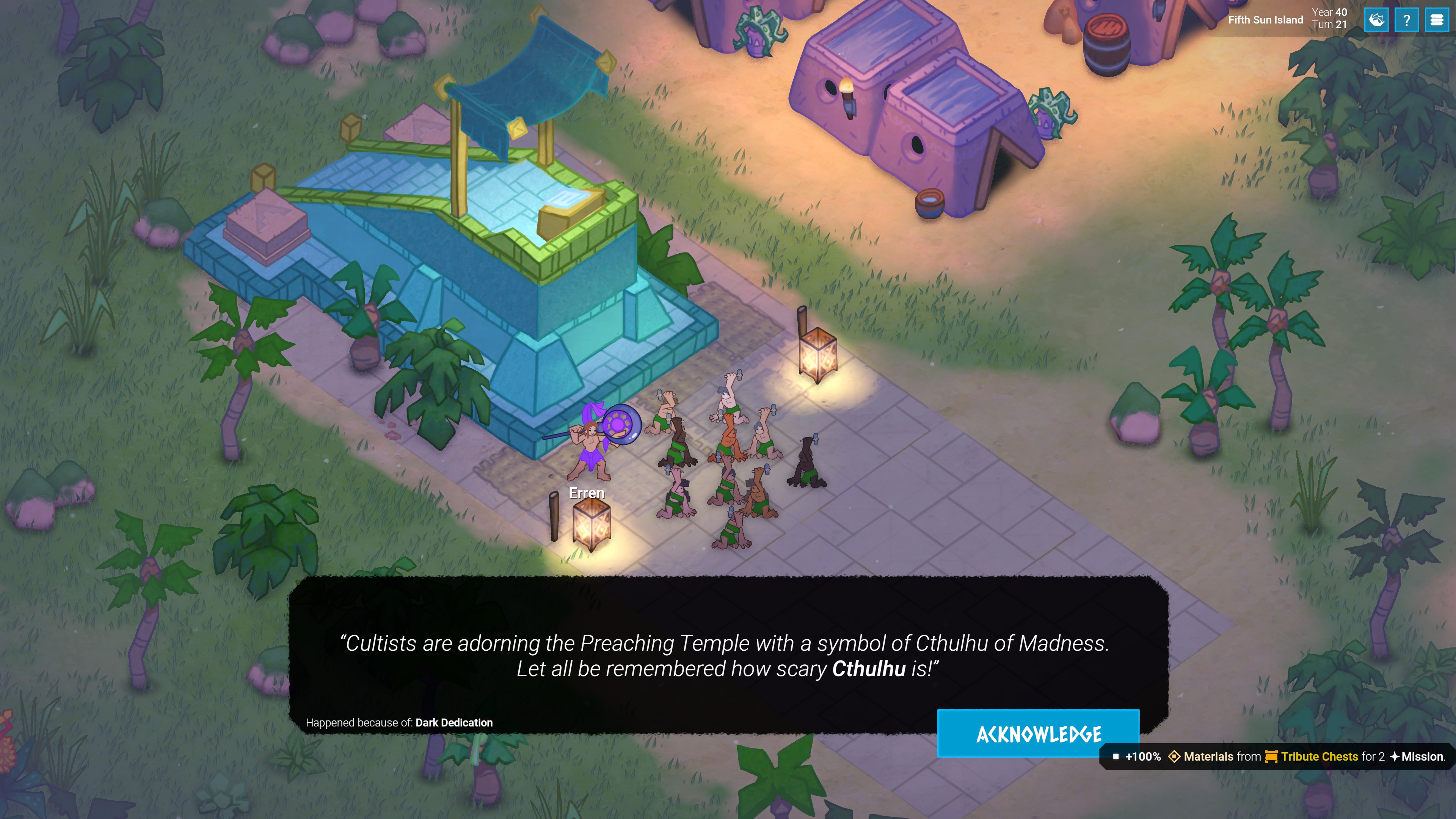 Losing or being reduced to 0 health in combats can be a heavy burden, slowly breaking the player’s bond with their disciples until they abandon the religion and have to be replaced with an unleveled recruit. However not progressing fast enough through defeating other gods can lower the follower’s happiness and cause a game over. Disciples will also eventually grow old, lowering their defensive stats and leading to death. Eventually, all disciples must be replaced, breaking up even the most well-oiled teams and leading to rocky times if players aren’t prepared. 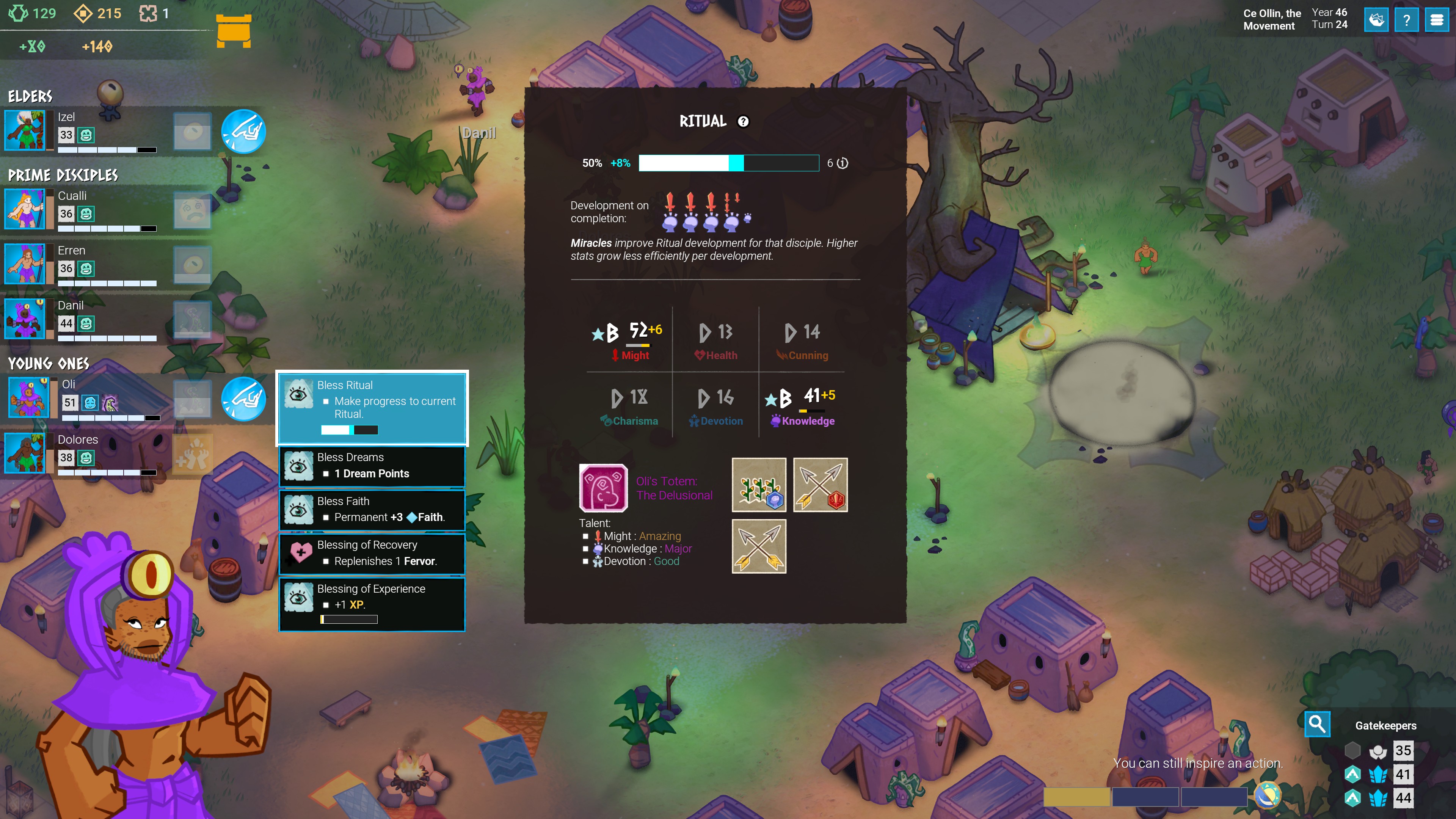 One of the frustrations for me in Godhood (particularly on my first run), was the limited ability to experiment with disciples and builds. Since disciples are fairly limited and around for a long time, it felt like I couldn’t easily try new classes or builds to change up my teams. I did try unlocking a 3rd class beyond the starting two chosen by my beginning loadout, but the disciple flopped and took up space on my roster for the rest of the game. 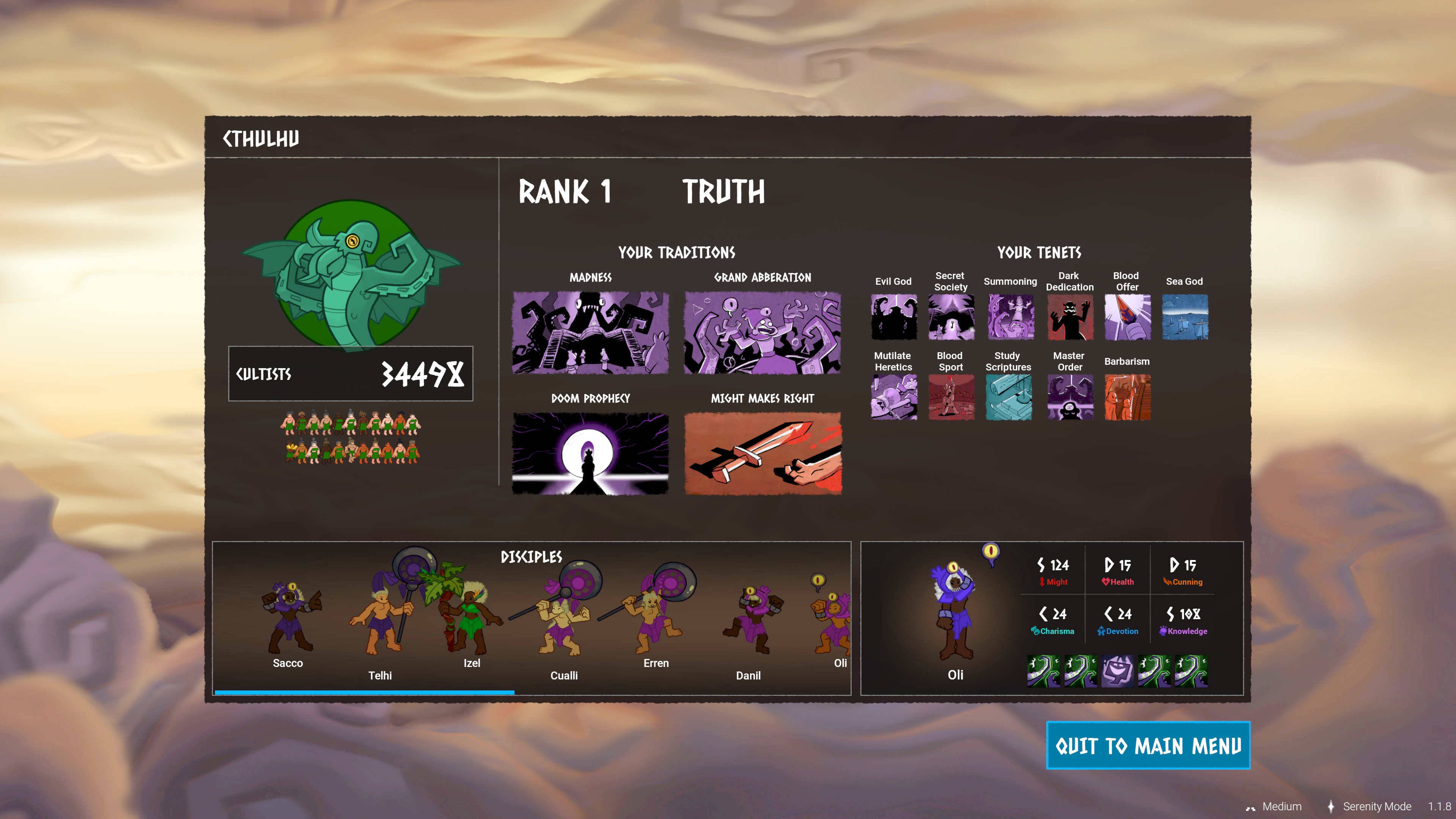 Victory at the end of my first run

Overall, I enjoyed the buildup and strategy of Godhood. I liked the variety of ways I could powerup my disciples, customize my religion, and plan for the future. Much of the game rewards planning well for the future, however, I found this made it difficult to experiment and diversify strategies in a single run. Some players have also expressed frustrations with not being able to directly control combat. I recommend Godhood for players looking for a more hands-off long-term strategy and simulation game.