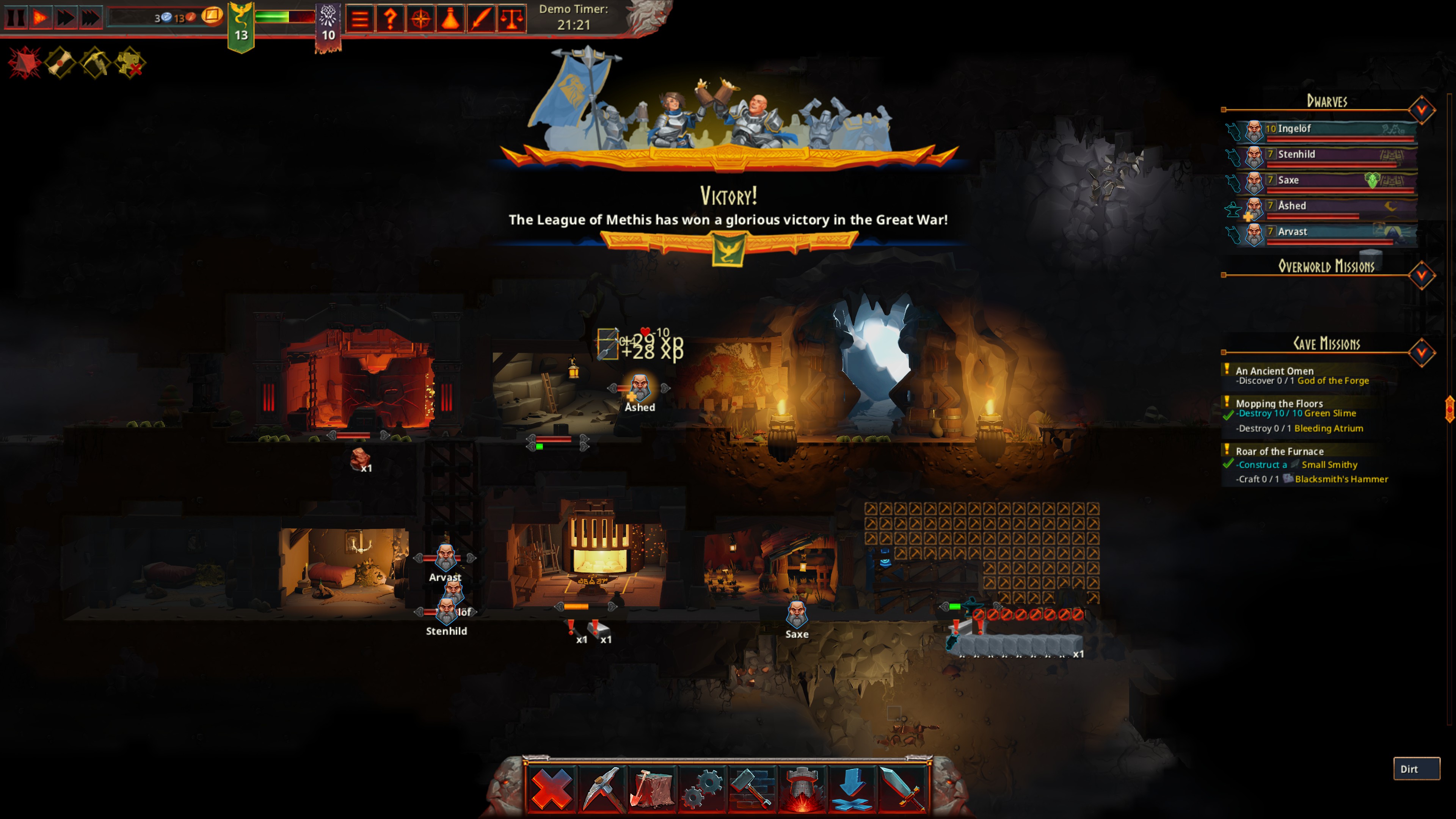 Every year I’m always excited for PAX and this year was no exception. With the PAX Online format, I’m pleased to be able to share with you my first impressions of several games, including Hammerting. Hammerting is a colony simulation where players manage a dwarven mining colony assisting their faction in a war. Players can build, craft, mine, and level up their dwarves.

Dwarves gain experience in skills, while players can assign points to attributes at level up

Players in the demo will start out with a colony entrance into a cave in their Moutainhome and small storage chest. They can command their dwarves to move deeper into the cave, finding new resources, enemies, and gathering ‘mountain lore’. Mountain lore is one of the resources used for research. Once players have fully explored their start cave, they can command their dwarves to mine to find new caves and resources, or to make room for structures.

Research in Hammerting allows the construction of new structures called rooms. Each room produces different resources such as various carved stones, ingots and cast metals, food, and more. Some rooms also act as housing or storage. I had some frustrations with my production line during the pre-alpha demo, and I wished I could set crafting command to maintain an excess of certain items. Research for crafting new items and rooms typically requires both mountain lore and trade lore.

Most research has previous research requirements

Trade lore comes from completing quests from the overworld. The dwarves a player commands are part of a faction at war. This faction will occasionally request resources to fend off attacks, speed up surface production, or launch their own attacks. Completing these quests gains money to recruit new dwarves, wood resources from the surface, and trade lore. I really liked the quest system and feeling like my colony was part of a bigger faction, although in the demo my overworld map seemed to be stuck and I couldn’t pan around to se the whole world.

While I expected and encountered some minor bugs in Hammerting’s pre-alpha demo, there were three missing features I’d really like to see. First was I wanted to be able to command dwarves to haul items to storage so I they could be within my safety zone and I could see them on my ledger. Second I’d like to be able to assign dwarves to production rooms so I can ensure the best skillset is on the job. And Third I’d like to be able to set priority of construction and mining jobs so I don’t get delayed waiting for far-off resource gathering that’s blocking my production chain.

Some construction is painfully slow due to dwarves prioritizing closer work

Overall, I’m very excited to see how Hammerting fleshes out. In my eyes it has a ton of promise as a colony sim game and the production and crafting seem balanced. I really like the connected feel with the overworld quests and monitoring the state of the faction’s struggles. Currently Hammerting is expected to go into Early-Access by the end of the year and I’m certainly planning to be there to help it develop.