The village Jarl has succumbed to the plague. Light his funeral pyre and begin your journey through Viking lore to appease the gods and cure the land. Play with figurines and cards for a tabletop feel while gathering new equipment and abilities. Use the unique board features to your advantage to (maybe literally) crush your enemies and sound the horns of victory in WARTILE!

The campaign map between boards

WARTILE is divided into multiple levels called boards. Each board is non-linear and 3D, sometimes with underground areas. Each board can be completed at three difficulty levels and typically takes 10-20 minutes to complete. Based on completion time, optional objectives, kills, etc the player will also receive a score, although this doesn’t appear to have any effect on the rest of the gameplay. Many boards introduce new mechanics such as special tile types (cracking ice, enemy spawn points, etc.), wave battles, stealth and alarms, escape sequences, lightning strikes, and boulders for crushing enemies. I found the various boards to all be unique, engaging, and visually pleasing. My only complaint was that there was no level with a party cap high enough to let the player take the full warband of figurines into battle once they were all unlocked.

The main focus of WARTILE is strategic combat. The player is always outnumbered and getting hit resets a figurine’s attack. If surrounded, 4 attackers can stunlock 1 defender. The player must use flanking, high ground, and status effects to defeat their opponents. During key moments, the player can also slow time to make split second decisions, such as moving out of a hex to dodge an enemy’s special attack. Status effects like stunning can also interrupt abilities. Most figurines are melee, but ranged figurines such as the pikeman or archer can attack from safety if they have a line of sight. There are some ranged consumables that can be picked up on the board, such as throwing axes or AOE fire bombs. I felt the combat was well done and exciting, although I strongly wished status effects were viewable and that I didn’t have to constantly tell the archer to fire at things in range. 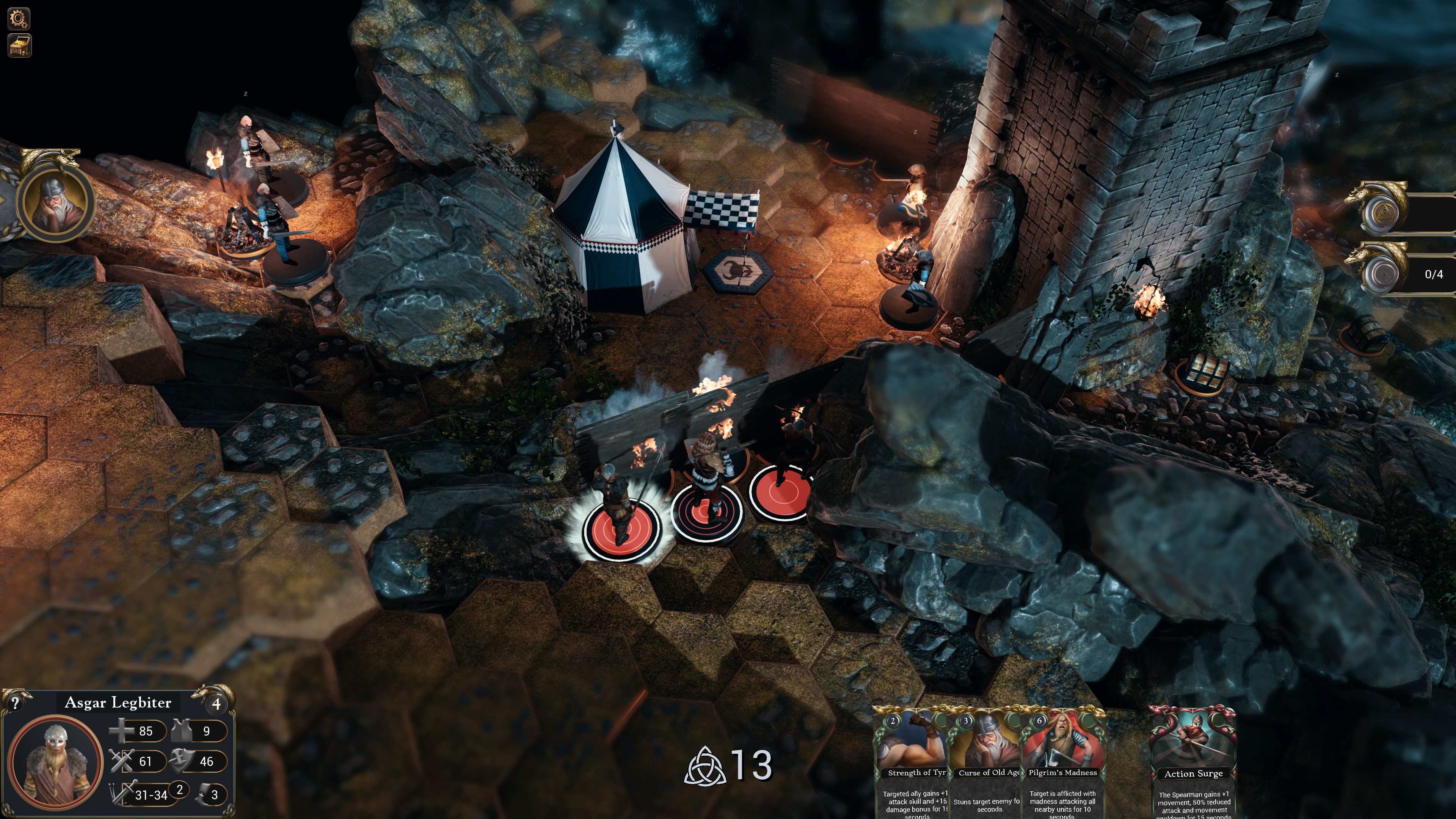 To use abilities in WARTILE, the player must play cards. Each figurine takes one special ability card into battle and can carry one consumable item from the board at a time (consumable items can’t be taken off the board). Special ability cards don’t have a cost, but do have a cooldown. Alternatively battle cards have a cost in battle points, but no cooldown and are shared across all figurines. Battle cards can have effects such as healing, temporarily turn enemies against each other, dropping barricades, and many other unique effects. Battle points are gained by defeating enemies and interacting with board objectives. The player also starts with some battle points at the beginning of the board. When not playing a board, players can browse all the battle cards in the game, but it’s hidden how to unlock them until the player unlocks the appropriate level. 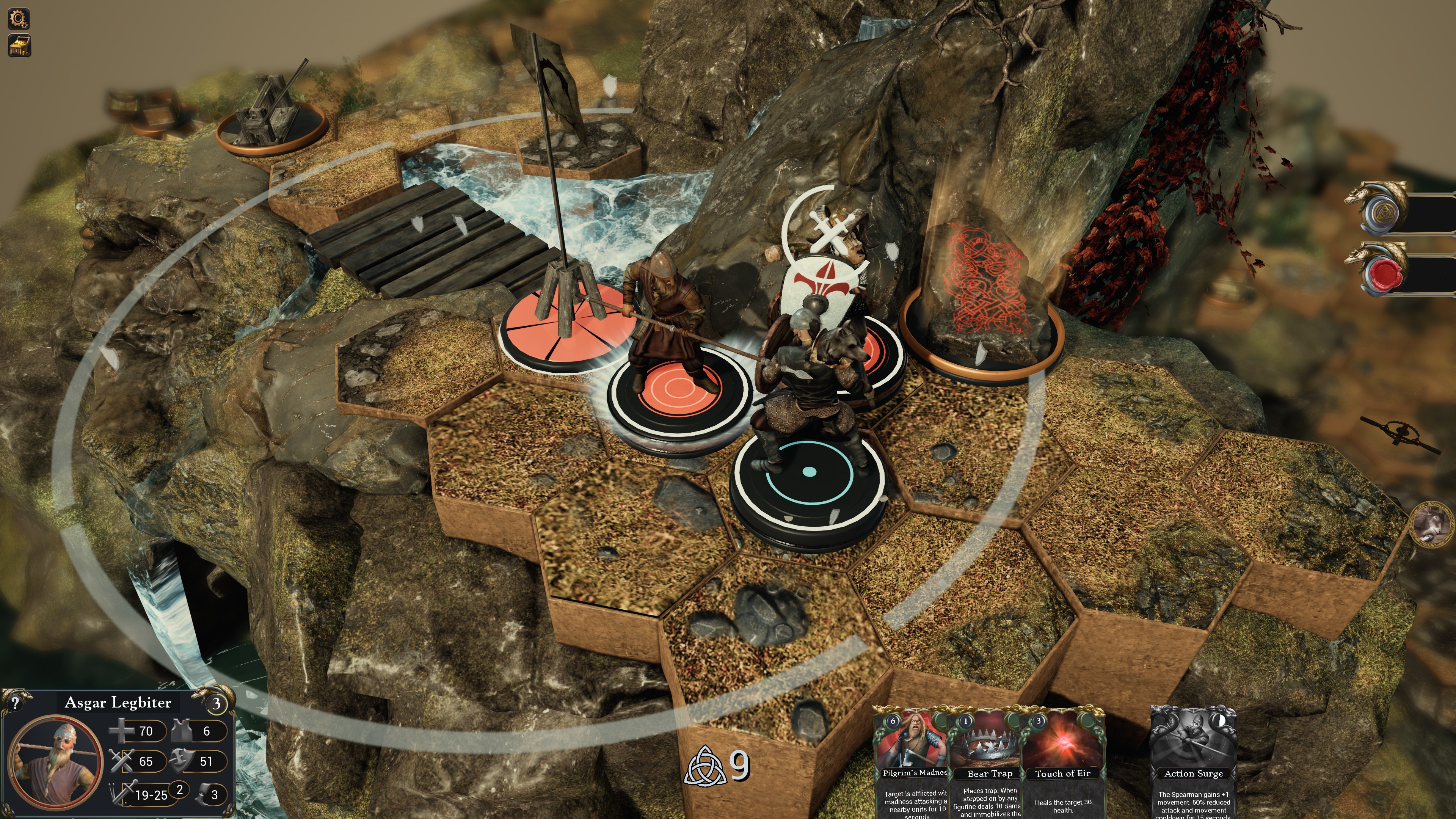 This banner buff is created using a card ability

Moving figurines is done by dragging them. The figurine effectively ports from point A to point B, although the move distance takes into account intervening obstacles. This is important for getting over traps, which become invisible after placed and trigger only when landed on. The figurine will have a visible cooldown before it can be moved again. Equipment can be picked up in battle by landing on it, but can’t be equipped until the board is completed. However, relics act as checkpoints that heal and revive units for a needed boost in battle.

Figurines in WARTILE can be improved between boards in a variety of ways. Between each board, a merchant is available whom sells random items. Equipping these items changes how the figurine looks in addition to its stats. Beyond the starting figurines, four additional unique figurines can be recruited from the tavern. Each figurine can be leveled up to a maximum of level 5, although experience is only gained by figurines that survive winning a board. Similarly, items are only gained from a board if the player achieves its victory condition.

Figurines can be given weapons, armor, and stat tokens

The story of WARTILE focuses on a plague spreading to a Viking village. Following the death of the Jarl (and father of one of the characters) the band sets out on an adventure through mythology to find the source of the plague and cure it. Traditional music sets the scene throughout the game and an enjoyable narrator voices the tale from start to finish.

The story will take the player across the continent

Overall, I very much enjoyed the strategic combat of WARTILE. I appreciated the feeling of moving figurines around a board, with the narration and music to get the player into the scene. Each board had unique and fun mechanics regardless of which figurines were brought, though I wish at least one board allowed the player to bring all their figurines. Checkpoints were useful with the increase in difficulty later in the game, and I enjoyed the character advancement. I recommend WARTILE to strategy players, especially if they can appreciate the tabletop feel and Viking mythology, music, and story.