SiNKR is an abstract puzzle game where players use hooks, reels, and other mechanics to move shapes to destination targets. Tools involve redirectors, launchers, and portals. The game features 60 levels of varying complexity.

Levels start off simple to introduce the mechanics

Reels can be connected to multiple hooks

SiNKR features 60 puzzles. I felt that all of them were interesting and that new mechanics were introduced in meaningful ways. Instead of using text to describe new mechanics, simple levels were used with the new feature highlighted and at the forefront. My favorite mechanic was portals, which could be connected or disconnected to different locations. Shapes maintain their direction and speed when traveling through them. I also enjoyed that many of the puzzles could be solved in different ways and some without using all of the pieces.

Portals can be tuned to different numbers

Multiple new mechanics were interested over the course of SiNKR. These involved twisting hooks, redirection launchers, new shape types, and more. I really liked having each new mechanic introduced in a series of levels that built up on what it could do without directly explaining it. It felt very fitting for a puzzle game and was done very smoothly so that it wasn’t confusing. However I wish more had been done to build upon the mechanics. While levels were plenty complex, I felt the full capabilities of the tool interactions was left unfulfilled. The 60 level count also felt short for the game’s potential.

I enjoyed the music and style of SiNKR. The soundtrack was relaxing and the sound effects were simple but effective. The simple color palette and smooth animations also emphasized this feel. In particular I liked the “diving forward” animations for transitioning between levels and the subtly moving background. These made the game environment feel more dynamic, although the background can be made static if the player wishes. 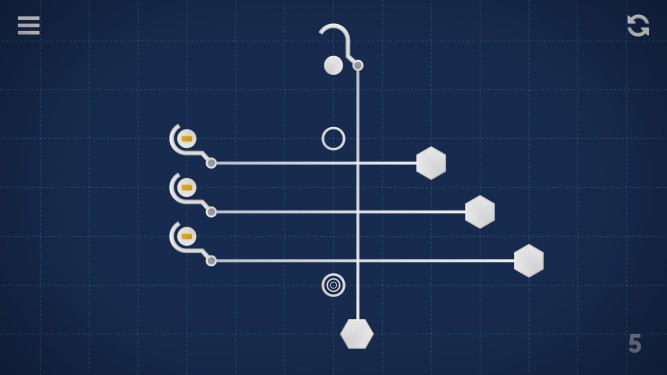 Overall I found SiNKR to be a fun and pleasant puzzle game. The mechanics were interesting, although I wish they’d be fleshed out more and the level count expanded. But I appreciated the smooth mechanic introductions and multiple paths to level solutions. I recommend SiNKR to puzzle game fans looking for a short but interesting game with smooth execution.