Cheeky Chooks is a totally FREE lite simulation game with minor idle elements. Raise chicken-like creatures called chooks and build the biggest ranch you can. Get more food, water, space, and toys for your chooks. Keep them happy or they’ll leave! Scare off enemies and increase your egg quality to make more money and grow your ranch. Right now players can still take part in the Halloween event to collect up to 4 unique legendary chooks!

Run your very own chook ranch!

There are early game rewards for prioritizing chook happiness over money 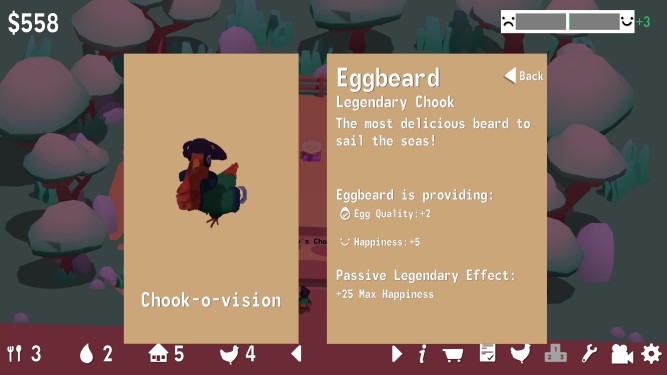 Not the prettiest UI for viewing chooks

My favorite part of Cheeky Chooks was collecting all the different kinds of chooks. There are 4 tiers of chooks: Normal, Rare, Golden, and Legendary. The legendary chooks are acquired through specific feats with the Halloween event (still active as of the writing of this review), and do not require food, water, or space. They also each provide a special bonus and can only be acquired once. Normal, Rare, and Golden chooks all lay the same amount of eggs, but higher rarity chooks require more food and water while also providing bonuses to things like egg quality which affects how much each egg sells for. By the end of the game, I was selling each of my chooks’ eggs for several hundred dollars each. 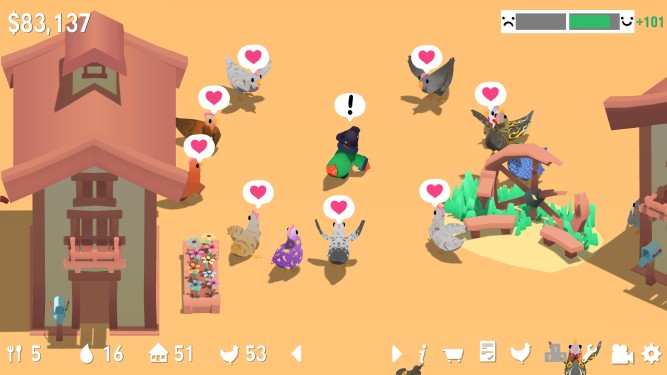 To acquire chooks the player purchases eggs of a specific rarity for the going price of that tier. The cosmetics of the chook aren’t revealed until it hatches. Unlike bland everyday chickens, chooks hatch fully grown. There are a few things missing from the chook collecting experience however. First I wish there was a catalog to show you all the types of chooks you collected and which you had yet to obtain. Second I wish each color of chook had a name, sort of like a breed name. I think these two features would enhance the chook collecting experience. 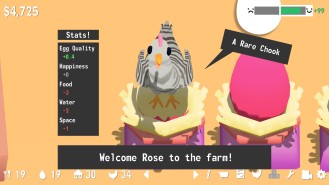 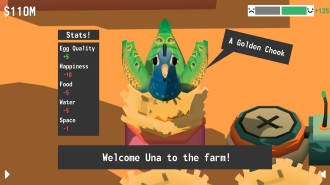 The main goal of Cheeky Chooks is building up your chook ranch to get more eggs, then to sell these for more/better items and chooks. Items have bonuses such as additional water or food for your chooks, or increased egg quality. Some items also affect the happiness of your chooks in different ways. Interestingly, happier chooks lay fewer eggs, but unhappy chooks may leave your ranch. Cramming too many chooks into your space will also make them unhappy. So there’s a lot of balancing your stats and upgrading your ranch to get more space and items. There’s a lot of time to be wasted- I mean spent on trying to layout a nice looking ranch. Ultimately your layout doesn’t affect how things work, but a player is likely to notice more glitched chooks if things are too close together. Chooks (or enemies) getting stuck doesn’t actually mean anything bad, except that they won’t be able to help you during Pumpkin Smash events. But this will likely bother some players. 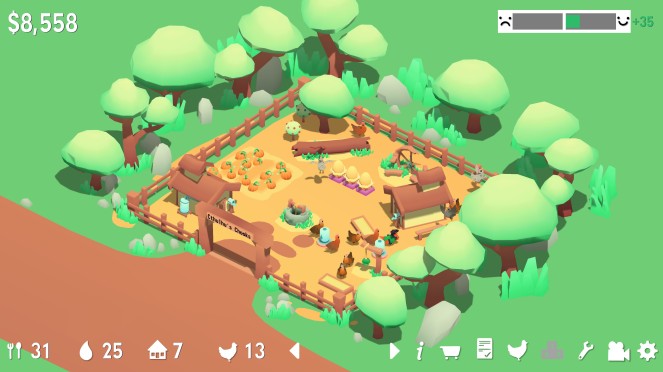 To lead the player through the game, there are several tiers of missions as you level up your ranch. Tier 0 represents the extended tutorial, up through Tier 3 at the end game. Missions can be things such as acquiring certain items, selling tons of eggs, hoarding chooks, upgrading items, and more. Missions give rewards such as money or unlocking special items in the shop. The Halloween event missions (which are all connected to smashing pumpkins with your chooks during random events), each give a unique Legendary chook with special stats. I found the difficulty curve of these missions to be very smooth and rewarding, although in late game the Pumpkin Smash random event was somewhat annoying since the money it gave was negligible. 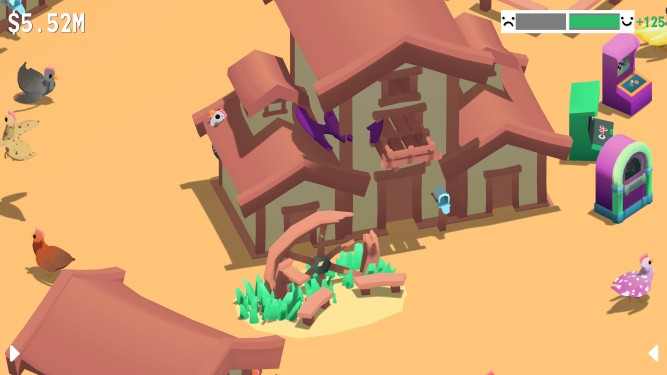 Unfortunately, this sort of clipping is normal

Since Cheeky Chooks is a free game made in a relatively short amount of time, it’s not surprising it lacks some polish. I played on version 1.Spooky.2 (yes, that’s the name). There’d been a lot of bug fixes since release, but I still found enemies to clip through tall buildings and sometimes get frozen randomly in the sky. Chooks would sometimes clip into the ground or continuously run into the fence for no reason. Often chooks that were spawning in would get knocked aside by nothing and the camera would be looking at a blank space. The UI for moving chooks between buildings was also very cumbersome, which wouldn’t have been an issue if the game didn’t try to put all the chooks in one house when multiple were available. Plus there was no fast way to buy multiple of the same item from the shop.

Pumpkin smashing gives a couple K, hard to get excited over when you have a couple M

Overall I found Cheeky Chooks to be a well worth it game. It has plenty of play time, no cost, and no microtransactions. The minor idle component lets the player continue to accumulate eggs for a couple hours after turning it off, so it doesn’t need a lot of play time. I certainly racked up most of my playtime arranging my ranch and collecting every last type of chook. While it lacks some polish, that’s completely understandable considering it’s free. Definitely worth checking out if you’re a fan of lite sim games.