The Talos Principle is a first / third person puzzle game with a sci-fi setting and philosophical story. Players navigate over 120 3D puzzles to gather sigils, which progress the story and unlock more puzzles. Tools include lasers, drones, doppelganger recorders, and more. The story focuses on what it means to be human, the experiences of consciousness and death, and the remnants of those who came before. Short text documents, QR messages, and audio logs are scattered throughout the game for the player to experience.

There’s no single way to solve each puzzle

Beautiful open landscapes are featured throughout the game 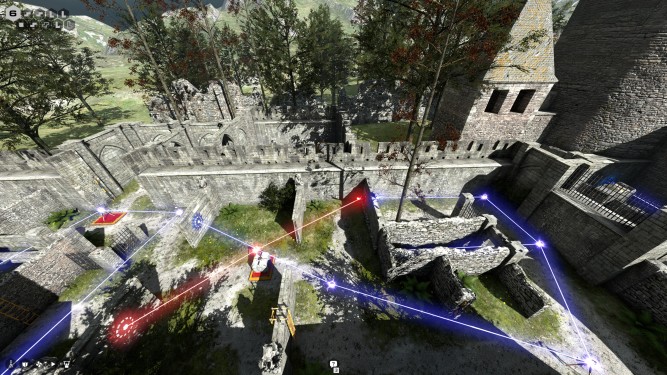 The Talos Principle has a huge collection of puzzles, which for me was the #1 selling feature of the game. Each of the handful of tools is pretty simple to understand, but can be used in a variety of combinations. While most of the levels do not provide new and exciting solutions, the reuse was kept to a minimum. Puzzle difficulty generally increased over the course of the game, with puzzles spanning larger (and taller!) areas and requiring more steps. Challenge “Star” puzzles exist primarily outside the bounds of normal puzzles and collecting them all grants access to special sigil puzzles that unlock the third ending. I will admit to needing to look up hints to solve some of the Star puzzles, because they can require everything from riddle solving to breaking game mechanics and linking together multiple puzzle areas.

Puzzles get larger throughout the game

As puzzles got larger and longer however, there became a problem of item shuffling. Often you’d be able to figure out what you needed to do way faster than you could execute it and the shuffling of items from one area to another became tedious. I also often wished I could manually save a puzzle in one partially-completed arrangement so that I could safely experiment on a solution that if it failed would require to me reset the whole thing. Of particular note was the recorder, which you use to record a doppelganger, was very prone to causing resets. It was easy to get items locked in inaccessible locations when the recorder ran out. This led to often turning the recorder on and waiting around extra long at each step you did to make sure your future self would have plenty of time to accomplish their tasks. Other times recorder puzzles explicitly needed you to just turn it on and wait for long periods of time without doing anything, which just isn’t rewarding gameplay.

The story and discussions are a major highlight of The Talos Principle. If I had to describe the game in three words it would be “Puzzles and Philosophy”. The story focuses on the people who came before you in the world, both the humans who built it and the others like you running around in it. Through messages and short text documents you learn their history and thoughts. Many of the documents are philosophical or religious in nature and pose questions about what it means to be human, what’s the meaning of life, and what death is. There’s also a companion you’re able to regularly message, starting not too far into the game, who challenges your own philosophy about consciousness and what it means to be a person. There are a lot of options for describing what you actually think, but I still found the options unsuitable for describing my own views and as a result ended up in a debate about things I didn’t really believe. Which might’ve been fine if my companion hadn’t pointed out all the flaws in my logic and left me frustrated trying to explain myself.

The game features three distinct endings based on the final choices you make, although the decisions you make throughout the game can flavor them differently. Each ending shows more of the story and gives the player’s character a very different future. The endings can be done in essentially one play through because the last auto save is before you commit to one of the endings. Decisions you make throughout the game are primarily based around your philosophical arguments in discussions with your companion. 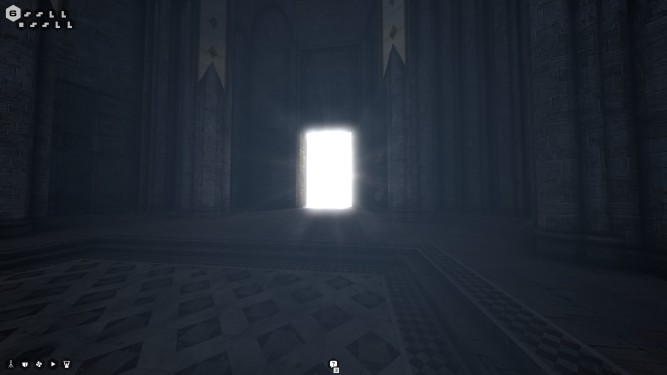 Will you choose the light?

There are five distinct environments in The Talos Principle: 1) Brick-walled park 2) Egyptian desert 3) Gothic cemetery 4) Snowy mountaintop 5) Industrial ice land. Each of these is accompanied by calm music and a beautiful landscape. The atmosphere of this game is amazing and certainly the kind of thing I love taking a moment to line up screen shots for. Every world I immediately ran around to see all the edges and nooks to look for story related content and to see the view. I did have two issues in this area however. First was that the visual assets were reused a lot. Normally this wouldn’t be a problem (ex. walls), but because effort had been put into placing statues, particularly broken statues, all over every world it ruined some of the appeal that they were all posed and broken in exactly the same way. My second issue was that the mood was often broken by occasional “visual glitches” where a solid object would temporarily flash as static and make an associated static noise. I assume this was added to tie in with the idea that the player is inside a simulation, but I found the noise very grating when I was trying to focus on a puzzle and disorienting when the item that flashed was right in my face. If the sound had been more subtle and the glitch had a radius around the player where it wouldn’t occur, I think it would’ve still had the same story benefit without distracting the player. 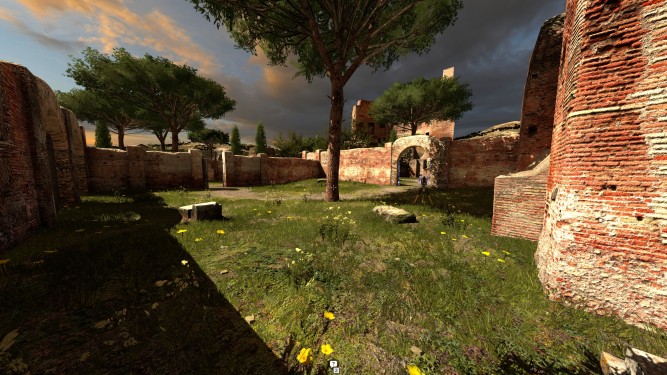 My last issue with the game, was simply the nature of the philosophical / religious material being rather biased toward Western ideology. I’d have loved to see more diversity with Eastern ideas of life, death, and consciousness being brought into the mix. The game wasn’t bad without them, I was just surprised they weren’t there. I think it would’ve suited the premise of the story better too. 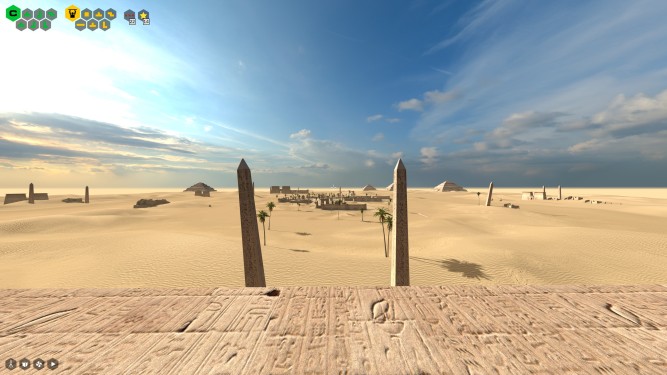 Easter eggs! This game has a lot of them tucked away in hidden corners. Unless you’re looking for them you’ll probably only find a few in one play through and they’re pretty minor, but the Steam community has cataloged about three dozen. Most of them are good humor references to other games by the developer, but some relate to the story, other games, or are simply cute.

Overall I really loved The Talos Principle. It got me thinking a lot, both about puzzles and rationalizing my own ideas and theories. I became attached to the characters and wanted to follow their stories, however emotional or detached they became. The puzzles challenged me and the easter eggs made me laugh. I wanted to see all the ending, read every note, listen to every audio log, and collect every sigil. I didn’t think it was perfect, but it still impressed me and made me want to keep playing. And the story that made me think? That’s what pushed it over and made it a work of art.

Follow this blog and receive notifications of new posts by email!